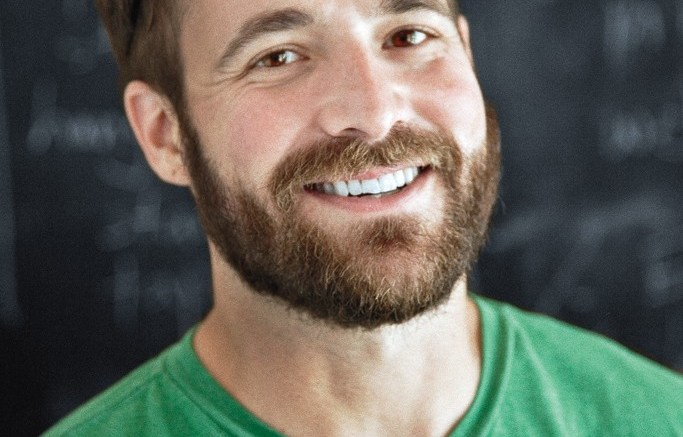 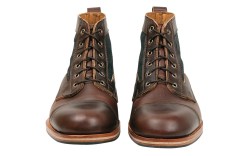 Joshua Bingaman, founder and designer of Helm Boots, had what he describes as a turning point a year ago. Overwhelmed by overseas communications, U.S. customs and red tape that seemed to increase with every order, he considered exiting footwear entirely and focusing on his coffee business. (Bingaman runs Progress Coffee in Austin, Texas, and Owl Tree Roasting, which supplies Whole Foods Market.)

“It was my come-to-Jesus shoe day,” said Bingaman. “Do I throw in the towel or do I come back to the drawing table and restructure and reanalyze why I did this? With all my cafes and even Helm, I really love and desire the business to be based on personal relationships.”

It was that passion for people and local communities that drove Bingaman to continue his work on the men’s footwear brand he founded in 2009. Helm Boots USA started with fall ’12, and the boots, which had been handmade in Turkey, are now manufactured at a factory in Maine. And materials, including leather and canvas, are sourced in New Jersey and Illinois.

The revamped brand relaunched with just three boot styles, retailing from $389 to $399, and a limited-edition look made for the Railroad Revival Tour, a music event that was set to include Willie Nelson, Band of Horses and others but has since been canceled. Going forward, Bingaman plans to bring back several styles from previous Helm seasons, including the popular Ray Ray. He said customers will also notice a slight difference in product.

“These are made more to last,” he said. “They are not going to be quite as light, but we’ve really worked on them not being too heavy and focused on their breathability.”

To drive home the message of community and local production, Bingaman has brought all other operations home to Austin. He discontinued his relationship with his New York showroom and PR company, moving both to the Texas capital.

He also plans to open a Helm store there. The 1,000-sq.-ft. space, located on East Sixth Street, will feature Helm boots, as well as a selection of lifestyle items from other Austin-based designers and entrepreneurs when it opens by the end of March.

“It’s the first time I will be able to embody the brand in a space — it’ll be like the Helm living room,” said Bingaman, who previously co-owned the Subterranean Shoe Room in San Francisco with his brother. “We’ll have private shows there, art shows, and it’ll be the heart of Austin.”

“The videos we did with some local business owners in Austin [reflects my] dream to fuel [the business] with relationships,” said Bingaman. “We had a local band score the soundtrack. That to me is the heart of Helm. I just picked six close friends and hired a local film company to show the ethos of [the brand].”

And while his enthusiasm for the “going local” movement is relatively new, Bingaman points out that his cafes have long served local food and spotlighted the town’s music scene.

Still, Bingaman stops short of calling his newfound passion a political one.

“I’m happy supporting people who are supporting me,” he said. “If more people did that here and, quote, sacrificed the bottom line and didn’t outsource for the extra buck, god, our economy would be like on steroids. In 24 hours, I became so passionate about that.”

The new focus, however, made the brand a finalist in Martha Stewart’s “American Made” awards last year and landed it a new major account. Nordstrom.com picked up the fall line. In addition to the department store, Helm is seeking five to 10 other retail accounts that would value the new American-made emphasis.

In the meantime, Bingaman spends less time in the port city of Houston, trying to get his shipments.

“I spend multiple hours responding personally to customers, and I love it,” he said. “If it’s not fun, don’t do it.”