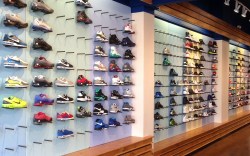 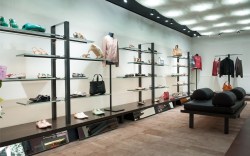 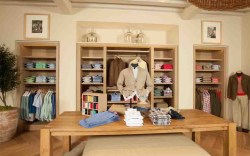 Supra Heads to the Beach
Supra recently opened its first California store in Santa Monica. The 1,400-sq.-ft. store follows successful debuts in Paris and New York. However, the new boutique is a bit of a departure from a design standpoint. While the first two locations used a warm, dark color palette, the Santa Monica store features a bright open space. “Supra began as a skateboard footwear brand in Southern California, so to open a store in Santa Monica just a couple blocks from the beach and amid the scene and the atmosphere in which the brand grew up, it’s very exciting,” said a brand spokesperson.

Stash Preps for Opening
A new sneaker shop is heading to Chicago’s Wicker Park neighborhood. Store manager Moy Arroyo said he is preparing for the grand opening of Stash, a 3,000-sq.-ft. sneaker store. It debuts in mid April, but this past weekend the doors were opened to tease customers about what’s to come. The shop will carry a wide range of women’s and men’s athletic shoes, as well as feature a special glass-walled room specifically to showcase Air Jordans. “We’re going to get a lot of limited-edition, but also “quick strike” Jordans, which are shoes not scheduled for release, and we’ll be one of the only stores in Chicago to get them,” Arroyo said. The Jordan room also will serve as a special consignment area where consumers can bring in their collectable sneakers and sell them in the store. Arroyo said that with a Foot Locker, City Sports and Urban Outfitters situated nearby, competition on the street is increasing, but also bringing shoppers to the area. “It’s actually going to help us,” he said. “It brings more people to the area, and over the last few years, this street, [North Milwaukee Avenue], is becoming the sneaker street in Chicago.”

Fratelli Rossetti Bows in Taiwan
Fratelli Rossetti is heading east. The brand recently debuted its first boutique in Taipei, Taiwan, marking its eighth store in Asia. The brand plans to have 50 doors in operation in the region by 2017. The store follows the same design as in its Milan flagship store. “The Taipei opening is a fundamental step in Fratelli Rossetti’s development in the Asian market,” co-founder Luca Rossetti said in a statement. “The brand was already met with a warm welcome in China and Hong Kong, and we are certain that the Taiwan consumer will appreciate the quality, craftsmanship and design of our products.”

Faconnable Hits Bellevue
The Pacific Northwest is about to get a touch of the French aesthetic. Faconnable on Wednesday launched a new 3,500-sq.-ft. store in The Bellevue Collection shopping center in Bellevue, Wash. The store features natural wood floors and white walls with blue stripes, meant to evoke the feel of the outdoors. The store stocks the brand’s entire range of apparel and footwear for women and men.