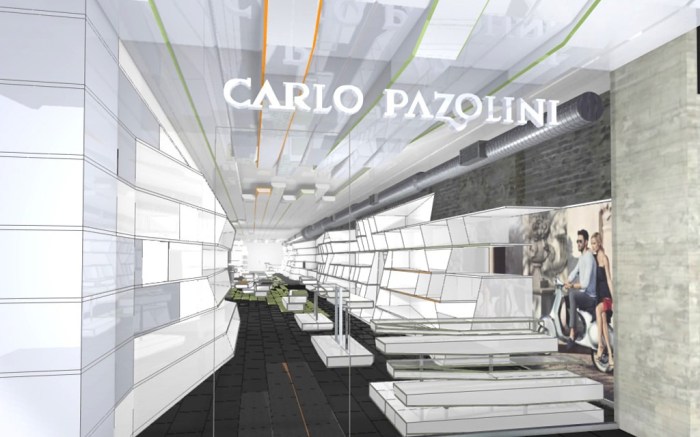 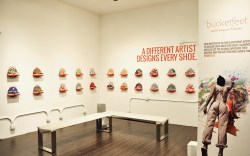 Meatpacking District Welcomes Carlo Pazolini
Carlo Pazolini is adding a second retail location to its New York stable. The Russia-based retailer’s second location in the city opens this weekend, in a 2,500-sq.-ft. store in the Meatpacking District. (Its first store, in Soho, debuted at the end of 2011.) The new shop, designed in partnership with Italian architect Giorgio Borruso, includes such features as exposed industrial brick and furniture that evokes images of sleeves of ice that have fallen from the ceiling in stages. In 2009, Borruso designed the brand’s first western European flagship in Milan. Two more New York doors are set to open by year’s end, on Third Avenue and Madison Avenue, bringing the count in the U.S. to 14.

Bucketfeet Pops Up
Bucketfeet, the sneaker brand with uppers that are painted by independent artists, launched its first pop-up store in a gallery space in Chicago’s Block 37 shopping district. Open through Sept. 23, the temporary boutique features a rotating showcase of more than 35 artist-designed shoes and an exclusive look at the brand’s first styles for kids. Work by Chicago-based artists and Marwen art school students are also showcased in the space.

Beautifeel Expands in Australia
Israeli fashion-comfort brand Beautifeel grew its chain of stores with the opening of a site this month in Brisbane, Australia — its fourth location in the country. The store, boasting a contemporary, all-white design, is located on Edwards Street, home to such fashion brands as Louis Vuitton and Gucci. According to Beautifeel founder Ami Bar-Nahor, the brand plans to open another four doors in Australia as desirable locations become available.