Retailers Left in the Cold 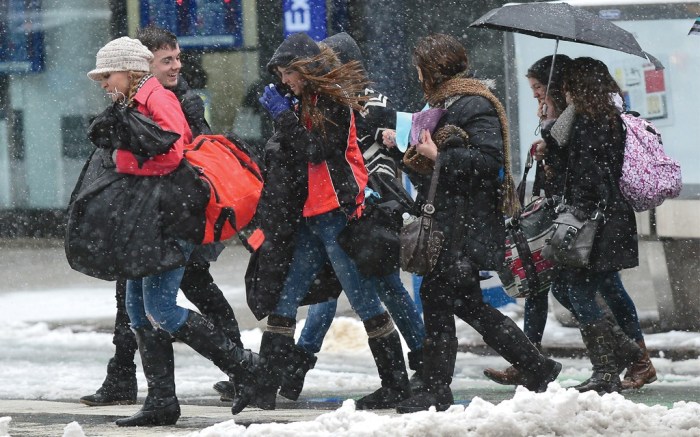 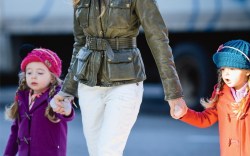 Industry executives and analysts said last week that given the recent spate of chilly temperatures, logging positive comparable-store sales for the first two quarters of 2013 might be difficult. The Northeast and Midwest, in particular, have been hit hard by storm systems, while the southern regions of the country have fared better.

“It’s been a very tough environment to sell spring product except in warmer parts of the country,” said Jeff Van Sinderen, an analyst at B. Riley & Co.

“Right now, I would say weather is definitely a bigger factor than [macroeconomic conditions],” he added. “The demand is real. When the weather gets better, people will go out and shop and buy things, partially because they’ll be so relieved that there’s actually sun and warmth.”

Steven Marotta, analyst at CL King & Associates, agreed: “As lame as it seems to blame the weather, the first quarter last year was so spectacularly good for weeks on end, while this year it’s been so spectacularly bad for weeks on end. The evidence suggests that weather could, for the moment, be a bigger factor than taxes among consumer concerns.”

Retailers such as DSW and Famous Footwear confirmed they have seen decreased store traffic, although conversion rates have been higher among shoppers who are actually going into stores. That signals consumers are eager to shop, but just need the right opportunity to do it.

At DSW, reasonably good weather in the West at the start of March led to a 30 percent increase in sandal sales in the region that week, said Mike MacDonald, the firm’s president and CEO, on a call with analysts. However, the region with the worst weather saw sandal sales slump 60 percent.

“It’s clear that categories that are affected by weather, like sandals, are disproportionately affected,” noted MacDonald. “It’s also clear that in regions like the Northeast, Mid-Atlantic and Midwest, which have had less-favorable weather and larger weather swings from the prior year, business has been much more severely impacted than in the South and the West.”

Debbie Ferrée, vice chairman and chief merchant of DSW, added, “It’s not unusual, once the weather turns, to start overexceeding sales plans. [Meanwhile], how we’re managing our inventories right now is by looking at the facts: What is the customer telling us they really love? The West and the South are showing us they like the sandals and wedges [we’re giving them].”

Rick Ausick, division president of Famous Footwear, said that as weather patterns have changed over the years, consumers are adjusting their buying schedules according to need, so retailers need to plan accordingly.

“We’re spending our time and energy making sure that our inventories are right, so [if] things aren’t selling well now, we’re making some adjustments,” he said. “And if there are things that are selling really well, we’re buying more of them, too.”

On the bright side, boots, the biggest winter style, are continuing to ring up sales at major retailers.

At Macy’s Inc., for instance, CFO Karen Hoguet said the firm consciously held over cold-weather product in anticipation of a long winter.

“Sometimes we clear our floors too early, so we have kept some of the cold-weather merchandise on the floors to continue to sell now. But we don’t see any liability in terms of future markdowns,” she said on a recent conference call.

But while bigger players can be flexible with inventory management, independent retailers are locked in trying to sell existing stock. That’s giving some retailers mixed feelings heading into the season.

Brian Andre, co-owner of Lori’s Shoes in Chicago, said weather in the Windy City this month has been more like it is in January and February.

“Fewer people are braving the cold and coming out to shop. It’s getting harder to gauge year after year because last March saw such a boom in selling because of the crazy warm weather, and this year has been a protracted late winter, which has put a damper on everything.”

Still, Andre said he is hopeful that the lengthy winter will mean pent-up demand for new styles to the extent that “there’ll be a rush of buying once the weather does break.”

Zohar Pereg, owner of Zohar in Cedarhurst, N.Y., noted, “Business hasn’t opened up yet. … I know we won’t have a long period of time to sell all the beautiful sandals we have in bright colors, but I hope we’ll do well with them when spring arrives.” Pereg added that the styles that are selling right now are closed-toe looks such as flats, sneakers and loafers.

Other retailers said they have noticed definite consumer interest in spring merchandise, even though shoppers aren’t actually making purchases.

“Once the cold weather finally leaves us, spring business will be phenomenal. The customer is ready. Everyone is ready,” said Elena Brennan, owner of Bus Stop in Philadelphia.

Brennan observed that transitional styles, such as ankle boots from Liebeskind, John Fluevog, Camper and United Nude are doing well.

The fashion bootie trend also is helping other retailers bridge the gap between seasons.

“[That style] works well, even during the unseasonably cold weather, because people can wear their boots now with jeans and tights, but they will also be able to wear them with skirts and dresses as the weather warms up,” said Jennifer Mankins, owner of Bird in Brooklyn, N.Y.

“We have a lot of transitional styles in the store now, so the cooler temperatures aren’t negatively affecting our sales,” she added. “People are just focusing more on buy-now, wear-now styles and layering more until it gets warmer.”

Simply the idea of spring has helped brighten the mood for some stores.

Allison Krzych, co-owner of Kick boutique in La Crosse, Wis., said, “As long as the sun is shining, people have spring on the mind. One common factor for styles that are selling is color. People are trading in their heavy winter boots for lighter colors and silhouettes.”

Things are also sunnier in the South. Dave Neri, EVP and GMM of shoes, cosmetics, accessories and fine jewelry at Belk Inc., said overall footwear sales for the department store remain solid, with results in March driven by color, flats and canvas casuals.

He added, “Early selling on wedges is positive. And overall, our bridge vendors, [including] Michael Michael Kors, Calvin Klein and Sam Edelman, are all very strong.”

At e-tailer Zappos.com, consumers nationwide are shifting more into spring product, noted Jeff Espersen, GM of footwear. “Customers have been in a buy-now, wear-now [mode] for a while, and sandals are starting to take over,” he told FN.

As large fashion retailers and independents work to overcome the weather, one market segment is unfazed by Mother Nature’s fickleness.

“I won’t say we’re insulated from the swings in weather, but it doesn’t have a big impact on our business. We don’t sell boots, although right now the boot business is very good,” said Foot Locker Chairman, President and CEO Ken Hicks. “People can wear sneakers in any season. Color is phenomenal, running continues to be solid and basketball is trending up faster than most other categories of sneakers.”