Retailer of the Year: Kurt Geiger 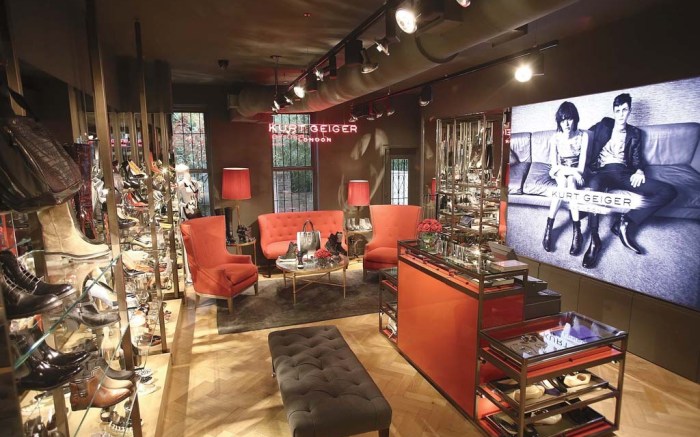 What’s the secret to breaking into the complex European market? For most designers, there is just one answer: Impress Kurt Geiger.

The British retailer, which made an aggressive push into the U.S. market this year with high-profile new boutiques and a buzzy Nordstrom launch, now operates about 300 stores and concessions globally and sells more than 200 brands.

Kurt Geiger is the powerhouse behind the footwear floors at Harrods, Selfridges and Liberty, among other stores. Shoes were a huge focus for all those retailers this year, and Jones Group Inc.-owned Kurt Geiger was at the center of the action.

“The London department stores are all about amazing flagships, and the footwear spaces are such magnets for shoppers,” said Kurt Geiger CEO Neil Clifford. “The global consumer who shops here is seeing fashion everywhere. They’re extremely well traveled, so these stores know they have to do things differently.”

In that spirit, the 50-year-old company teamed with Harrods to open its “Shoe Heaven” floor next August. The move marks the second time the department store has dramatically expanded its footwear real estate in three years.

Kurt Geiger is determined to grow its own retail footprint as well, particularly in the lucrative American market.

“The opportunities in the U.S. market are bigger than we initially thought,” said Clifford, adding that the company is on track to hit $100 million in U.S. sales in five years.

The firm debuted its first Kurt Geiger store on New York’s Bleecker Street in February. A few months later, it struck a deal with Nordstrom Inc. to sell the Kurt Geiger, KG Kurt Geiger and Carvela brands in 18 of the department store’s top doors.

A flagship in New York’s Soho neighborhood is on deck, as well as locations in Las Vegas, Los Angeles and Miami, among others. (In addition to New York, Kurt Geiger already has a shop in the South Coast Plaza in Costa Mesa, Calif., and in San Francisco.)

“Kurt Geiger is a fashion staple in Europe, and we are excited to have brought the brands to the U.S. consumer,” said Wesley Card, CEO of Jones Group, which touted Kurt Geiger as one of its big winners during a tough year. At press time, Jones was reportedly in the final stages of being sold, but Clifford said it was business as usual at Kurt Geiger.

This year, the firm focused on building the collection at Selfridges’ mega new men’s floor, the largest in the world. Kurt Geiger also played a major role in the launch of Selfridges’ Shoe Galleries women’s footwear department in 2010, which ignited the shoe floor wars across the globe.

“The [team] has been central to these projects and to our continued commitment to animate and evolve our offering,” said Sebastian Manes, Selfridges’ buying and merchandising director. “We’ve worked closely together to deliver extraordinary shoe destinations that we are extremely proud of.”

An important part of the firm’s strategy is to dedicate separate buying teams to each of its partners, according to Rebecca Farrar-Hockley, creative and buying director at Kurt Geiger. “We work hard to understand people’s individual businesses so we can edit the mix in the right way,” she said.

“Neil Clifford, Rebecca Farrar-Hockley and the whole Kurt Geiger team are one of the friendliest, [most] open-minded and experienced groups I have ever worked with,” said Kristina Blahnik, managing director of Manolo Blahnik International. “They are sensitive and responsive to each of their ever-growing markets.”

While the company has forged strong ties with big luxury names like Blahnik, it also supports the next generation of talent. In fact, this year, the firm donated 300,000 pounds ($456,000 at the time) to Cordwainers at London College of Fashion. “London has a reputation for being highly creative, and it’s a very good time for British design talent,” Farrar-Hockley said. “It’s important for a company of our size to help shape the future.”

Looking to 2014, the CEO noted the firm will continue its aggressive expansion efforts. For spring, the Kurt Geiger brands will be stocked in all Holt Renfrew doors in Canada. Kurt Geiger also plans to expand in China, Russia, Macau, Thailand and Singapore, among other locales. “We’re going to make a big push east,” Clifford said. “We’re not slowing down. If anything, we’re speeding up.”