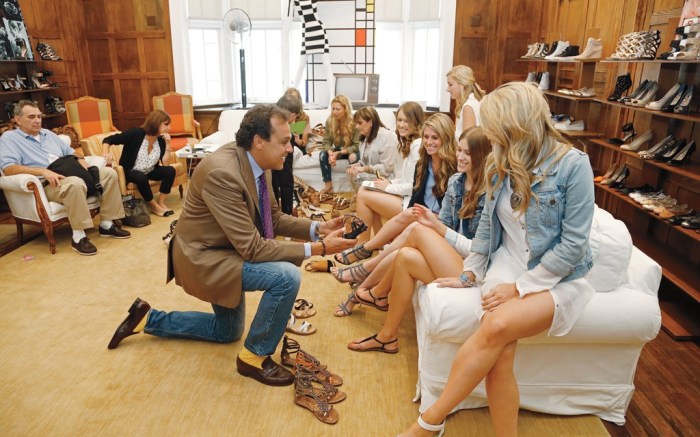 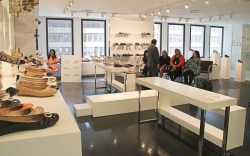 Retailers are continuing to buy closer to season, they told Footwear News at FFANY last week.

Economic uncertainty and a long spell of unseasonable weather have made it much harder to predict what consumers will pick up. And that is impacting retailers’ purchasing decisions.

“We bought very [few] sandals because in New York you have [virtually] two minutes to sell them,” said David Zaken, owner of David Z stores in New York. “We’re selling lots of sneakers. Sneakers are kicking.”

Zaken added, “The economy is getting better, so I’m looking forward to the [rest of the] spring selling season. I’m just watching now [for emerging trends] because it’s still early. I’m buying closer to season.”

National retailers also approached the trade show last week with an eye toward spring ’14. For the most part, they pointed to a continuation of the big trends from last spring, with novel twists on colors and materials.

Tracy Peck, GVP and DMM of women’s shoes at Macy’s, said, “The transitional market typically sets the stage for the big ideas for spring. We are on the lookout for them and want to get them moving in our warm-weather doors.”

Peck also reported that this season’s lower-shaft boots — especially peep-toe booties and lace-up utility styles — have sold well so far, as have fashion athletic looks such as the high-top wedge. She said these styles will continue to be significant growth opportunities for spring ’14.

Debbie King, VP and DMM of women’s shoes at Bloomingdale’s, agreed that she sees current spring trends continuing, but what were particularly prominent this time around were “a lot of neutrals and block heels.”

Retailers noted it has become increasingly important to look for product that transcends seasons, since weather patterns clearly impacted business in recent quarters.

“Our biggest increase has been in closed-toe casuals,” Peck said. “Based on the challenges of unpredictable weather, the more we can grow our penetration in less-seasonal styles, the better our chances for success.”

Justin James, co-owner of Katwalk Boutique in Baltimore, Md., agreed, adding that he has been seeking more-functional boots.

“From what we’ve seen from our customer, we don’t carry enough products there, compared with some of our fashion products,” he said.

For the most part, buyers said they are not letting Mother Nature dictate their entire buying plan. Their attitudes on the subject ranged from staying steadfast in their strategy to admitting they would slightly tweak assortments to hedge against a worst-case scenario.

Moise Keda, owner of Universal Shoes, a seven-store chain in New York, said it is counterproductive to plan business around the weather. “The seasons are the seasons, so there has to be a program,” he said. “It all comes down to whether you’re reordering or not reordering. We don’t stock as much as we did in years past.”

The Merchant boutique in Burlington, N.C., also is stocking less and currently is not placing orders for product beyond the back-to-school season. “My buying is very close to the need. I’m not buying six months in advance anymore,” said owner Mohamed Merchant, adding that his business is up 15 percent over last year.

Tony LeFever, footwear buyer of New York-based King Size, a catalog and online retailer specializing in big-and-tall merchandise for men, said, “[Our customers] buy specifically to need. If it’s not 90 degrees outside, they’re not buying sandals.”

And as the seasons start to blur into each other, with warm winters and cool summers, inventory turns more slowly, which takes some getting used to.

Other retailers making adjustments to their business plans due to shifts in weather patterns include John Ruffo, owner of 1Twelve Boutique in Redondo Beach, Calif.

“We are buying less [footwear than last spring] and we’re buying closer to the market,” he said. “Dollars are tight and we are trying to keep our open-to-buy flowing.”

And there are retailers elsewhere in the country that aren’t worried at all about weather trends.

Miami-based Bella Sole is one of them. Giuseppe Lombardo, the store’s finance manager and buyer, said, “We are less affected by unseasonable weather patterns in Florida, so I’m hoping for a good spring season. Since it’s warmer in the South, I’m on the lookout for wedges and ballet flats as they seem to sell very well.”

For now, retailers are starting to roll out discounts to move some leftover spring ’13 merchandise.

Lord & Taylor is offering a code that takes an extra 25 percent off on many categories including women’s shoes — even summer sandals that are not yet on actual sale.

High-end department stores, too, such as Saks Fifth Avenue and Barneys New York, have marked down spring merchandise, including designer sandals, by 40 percent.

Keda said some sales promotions have started at Universal Shoes, but so far it’s too early to ramp them up. Instead, he plans to wait until July before discounting deeper.

Brooklyn’s Shoe Market is already holding heavy promotions to move out existing product, said Vala, as sales have “definitely been a lot slower, although it picked up in May.”

And King Size’s LeFever noted, “Even though we’re promotional, we’re not [discounting as deeply] in May and June as we were three or four years ago.”

Merchant, though, is holding out a bit longer for sales to further improve. He said, “I’m still being cautious because I don’t know what the rest of June or July will be like. But it’s good that we have forward momentum.”