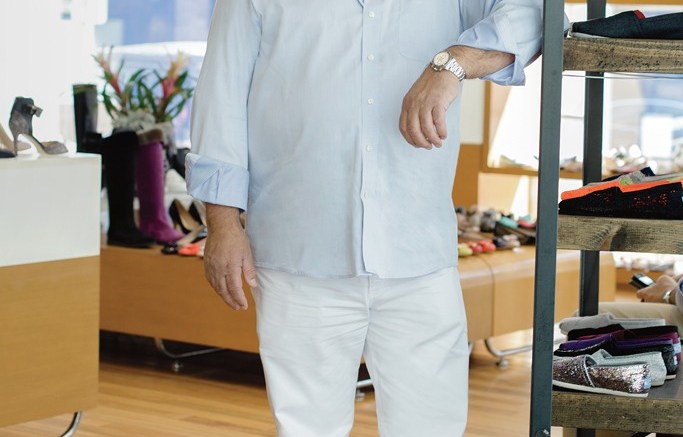 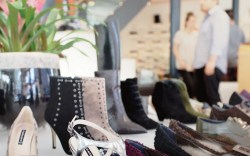 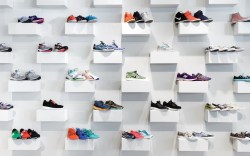 In fact, his status as a Beantown heavyweight was in full effect last month, when Footwear News spent the day with The Tannery founder and co-owner for an inside look at his four decades of success. While walking down Boston’s Boylston Street, the longtime retailer called out to friends and acquaintances, shook hands and even took a detour to peruse a new restaurant that was under construction.

At another local eatery, the famed Abe & Louis, Hassan continued his parade of well-wishes and glad-handing, hugging the chef, the maître d’ and the waiter, and even waving to a store employee on his lunch break. For Hassan, it’s all part of being the mayor of Tannerytown.

But his clout clearly extends well beyond Boylston Street.

When Hassan began to share an anecdote about his store’s early days, he couldn’t remember a detail about Birkenstock founder Karl Birkenstock, so he picked up his phone and called David Kahan, the new CEO of Birkenstock USA. And, of course, Kahan took the call.

That’s the kind of influence Hassan has fought for and won during his 40 years in the footwear game.

In conjunction with his nephews Talal and Tarek Hassan, he presides over a retail franchise that’s grown from a single leathergoods and boots store on Harvard Square to four destination shops under two nameplates in the Boston area, plus a thriving e-commerce business, with plans to expand even further.

But at the heart of the enterprise is a respect for family, a fearlessness for trying something new and a deep love of retail.

Here, Hassan reflects back on his entrance into the footwear business and how change and reinvention are the keys to success.

Let’s start at the beginning: How did you get into retail?
SH: I was always a merchant, even when I was young. My father was the opposite of me — he owned a small bank. Everybody said I would be a poor banker, but I would be a good [retailer]. My father thought when I finished school I would go [join the family business], but I didn’t. I started The Tannery. My father made fun of me. He gave me three to five months to fail so I could go back in the business. He told my mother, “In six months he’ll be back.” But he’d still be waiting.

You’ve changed the Tannery’s look and focus many times over the years. What motivates your desire for change?
SH: You can’t put your eggs in one basket. Most people have not changed their concept for years. If you are a shoe store, you stay with shoes. This is where we are different from most people, because we always change our concept.

Your nephews Tarek and Talal have been involved in the business since they were teenagers. Did you always know you wanted to make The Tannery a family enterprise?
SH: As a matter of fact, I tried to talk them out of retail because, as you know, retail is seven days a week. If I have a dream — and I love what I do — it’s one thing, but I can’t tell these guys to do it. We missed a lot of funerals and we missed a lot of parties and we missed a lot of weddings because we’re working all the time. You can’t tell people, when you’re family, to work seven days a week for 14 hours a day. We said, “Do real estate, let’s slow down retail.” But they loved retail so much.

Are there any advantages to keeping the business all in the family?
SH: A lot of companies, they have stockholders and they put them under pressure. You go to Saks Fifth Avenue, it’s 70 percent, 80 percent off, people giving away free stuff, because the stockholders demand growth, numbers and profit. We are a family business. We have no mortgages, we don’t have loans, we have no debts. If the timing is right and it’s our dream, we’ll do it. People say, “Oh, why didn’t you go to Chestnut Hill. We’ll give you a free build out.” Well, our dream is not to go to Chestnut Hill, [so] we don’t even go to Chestnut Hill.

You’ve been active in real estate since the early 1980s, with a sizable number of buildings in your portfolio. What made you want to branch out?
SH: Our first passion is retail, but you can’t live as well just owning a retail store.

How is it on a day-to-day basis working with family members?
SH: We are not working under one roof, [and] as busy as we are, we don’t have time to [be together]. So we talk on the phone. And since I am the oldest, and the least patient, I do the yelling and screaming, [and] the two brothers get along very well.

Concepts represented a new kind of business for you. What did you think when Tarek first proposed it?
SH: If you can afford it, why wouldn’t you give somebody you love his wish? He was not asking for a fast car, he was asking, let me try [something]. We’ve tried many things in the past, some worked, some didn’t work. He wasn’t asking for too much. So he did what he loved the most. If [just the] money kept you driven, then we wouldn’t get up in the morning.

Have you made any missteps?
SH: When we did the Harvard Square store, it was under ground, [so] if you put in a beautiful concept, people would not accept it. So when we went to [the 39 Brattle St.] store in Cambridge, we knew we had to change. We changed the merchandise and we changed the concept. But the people in Cambridge didn’t accept it — they accepted the product, but they didn’t accept the atmosphere. So we admitted our mistake. We took everything we built [and] threw it out in a matter of a year-and-a-half and we changed the whole thing. But when we came to Boston, we overbuilt it 10 times more than Cambridge because people here, they accept it.

What brands and people in the industry have been most influential for you?
SH: When I started the business, Frye gave me a $5,000 credit line, and I knew, $5,000 wasn’t enough. So I talked to Rudy Weeks, [former VP of Frye], and eventually he gave me maybe $65,000 of merchandise and said, “OK, your term will be 60 or 90 days. Let me see when you pay it.” He gave us our start. He is the guy who made The Tannery. And in 1984 or ’85, Paul Fireman gave me $1 million in credit for each store. I said, “I need a million for the year to do business,” and he said to me, “You need a million, I’ll give you a million.” He gave me the opportunity and the credit to built up our business to the next level. And Peter Lunder, [former president of Dexter Shoe Co.], taught me how to give away some of my money. And he’s been a very good mentor about that.

You’ve made a number of moves over the years, adding new stores, growing them in size and opening in the Boston market. What is the strategy behind your decisions?
SH: We always expand in the recession. When we opened in 1973 [and again] in 1981, when we were opening Cambridge and the big stores, it was a recession. And then six or seven years ago, it was the middle of the recession and we opened three shops. But we invest in a business we know. We didn’t try something new — we knew retail. And we follow our dreams.

As you work with your nephews, are you generally in agreement on how you should grow the business?
SH: If everyone comes from the same motive, [it works, even if] everybody has a different opinion. With the store [on 711 Boylston St.], at the beginning the plan was for two floors and I forced them to take three. Now [Tarek is] convincing me to take a fourth. How are we going to get the fourth floor? Don’t ask, I don’t know.

As you look back at all your success, what stands out most to you?
SH: At the end of the day, we came to this country [and] we are very fortunate. We are the very luckiest people in the world.