Milestone: Inside the Concepts Strategy 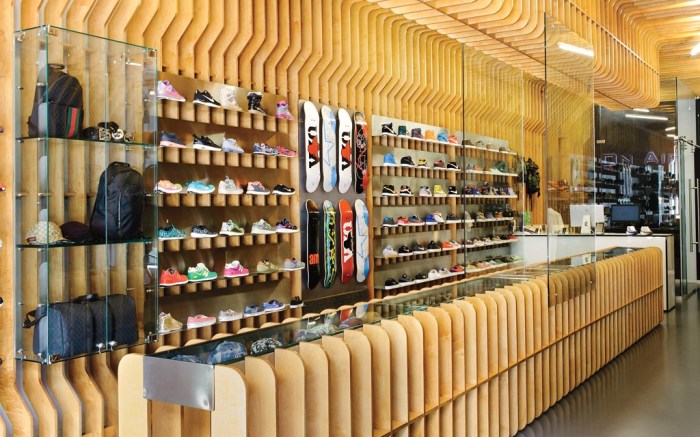 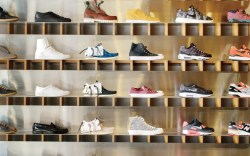 Tarek Hassan has energy to spare.

As if co-running The Tannery weren’t enough, Hassan also is the brains behind Concepts, one of Boston’s most cutting-edge streetwear shops, known for putting out some of the sneaker world’s most coveted collaborations.

First launched in 1996 as a shop-in-shop tucked away in the back of The Tannery,

Concepts grew into a standalone store in 2008. Located on Brattle Street in Cambridge, the shop caters to a sophisticated breed of sneakerheads, stocking mostly exclusive, limited-edition kicks from brands that include Nike, New Balance, Clarks, Vans, Asics, Gucci and Lanvin. Rounding out the footwear, which makes up 70 percent of the mix, are edgy clothing and accessories from labels such as Comme des Garçons, Saint Laurent, Human Made, Neighborhood, Canada Goose and Maiden Noir.

“Concepts is for the consumer who appreciates uniqueness and really special product,” Hassan said. “To be successful as a retailer today, you need those hot brands the consumer wants. But what’s beyond that? What makes you unique and different — the kind of store no one else can catch up to? That’s the drive behind Concepts.”

Hassan, an extreme-sports fan, said he was inspired to launch Concepts because, at the time, there was no place to buy snowboards and other gear alongside the latest sneaker and fashion brands. “I wanted to create an environment where those worlds and influences came together, from snow and skate to fashion and denim,” he explained. “To be able to buy

Clarks Wallabees, Nike Air Force 1s and the extreme-sports brands all in one place was unheard of then.”

The store set out to influence urban kids looking for style direction. “Back then, the Internet wasn’t readily available, and there were no blogs telling you how to put things together. So it was cool to see a store like that setting trends and presenting the whole lifestyle,” said Deon Point, Concepts’ manager and also an early customer. “Concepts was way ahead of its time and so out of the box for Boston. It was something you would have seen in Japan or New York.”

Early on, Concepts began teaming with brands on exclusive collaborations, long before such partnerships became ubiquitous in the sneaker world. “Brands saw what we were doing and the respect we had from consumers, and they wanted to be part of it,” Hassan said.

Today, those collaborations are a driving force, accounting for a “significant portion” of the store’s annual buy, according to Hassan.

The retailer has its own in-house design team that works closely with brands to develop special product. “We aim for everything we do to be timeless, to retain its value years after,” Point said. “If you look at the sneaker projects we’ve done, everything has resold for triple, quadruple, whatever times the price we sold it for.”

“The overall story and details put into the project set the bar high for what a collaboration should entail,” said Trevor Hill, category manager for Vans, noting Concepts’ keen understanding of its customer base. “Concepts really gets the world of skateboarding — the unique culture and diversity within it. [The store] has a well-curated approach that’s unique. They always partner with the right people at the right time.”

New Balance is another longtime collaborator. The Boston-based brand has worked with Concepts on numerous projects, among them the popular 999 S.E.A.L. shoe. “Every aspect of the shoe was thought out and executed precisely, [down to the] authentic military details. The consumer response was tremendous,” said Steve Gardner, New Balance Lifestyle SBU manager. “The team at Concepts includes some of the most knowledgeable, insightful and passionate people in the business. They have a strong sense of their brand and consumer.”

Indeed, the success of Concepts’ collaborations led to the launch of a Concepts clothing-and-accessories line. “When the consumer starts believing in you and what you’re doing, that’s when you become a brand and not just a retail store,” noted Hassan.

For its founder, the Concepts environment is key to solidifying that brand identity. “With our merchandising and the way the store is set up, we’re telling a story, presenting a lifestyle,” Hassan said. The shop’s upper level houses a recording studio, Concepts On Air, where staffers conduct live video chats with celebrities and designers. There’s also a subterranean lounge — an intimate, members-only hangout for a list of about 100 VIPs, consisting of pro athletes, celebrities and loyal customers. The space is outfitted with leather couches, TVs and fireplaces, as well as a private entrance. VIP customers have first access to any new collaborations or special projects.

Although the Brattle Street store is the heart of Concepts, the retailer’s e-commerce site, launched in 2011, is thriving, with a large following across the U.S., Europe and Asia. “Our online business is unstoppable — it just keeps growing. It’s a great way to show the world what we’re doing,” said Hassan, noting that he expects Web sales to spike between 30 percent and 50 percent by next year.

Concepts has other big ideas for 2014. Among the initiatives, the store will roll out a series of pop-up shops in other cities, beginning with London in early 2014, as it tests the waters for future retail openings. “The pop-ups will help us better pinpoint where we have a strong customer base,” Point said. “There’s a lot of demand for our brand, so we want to expand our reach.”

Hassan said he attributes Concepts’ success to the store’s unique approach and willingness to break the mold. “You can’t just be a great retailer with a great location that sells great brands. You need that edge. You need to make your store so unique and different that people will travel to get your special products. That’s what Concepts is all about.”