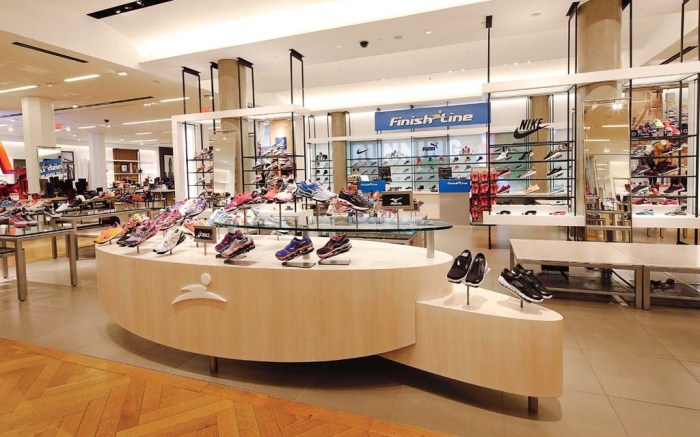 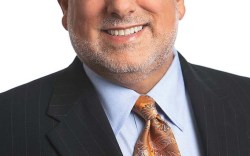 The holiday season kicks off in a few weeks and many executives are anxious this year amid a rocky retail climate.

“We’re in as good of a position as we’ve been in for a year,” he said during a recent interview at the firm’s Indianapolis headquarters.

It’s a big shift from late 2012, when the retailer’s core running business struggled, a much-heralded website was scrapped after a few weeks and investments in technology were questioned by Wall Street.

Now, the 650-store chain is pushing ahead with several new initiatives: A buzzed-about deal with Macy’s Inc. has opened up a new field of consumers; its Running Specialty Group has added a number of high-profile independents; and the company’s own running business has begun to reignite. On the tech side, the website and an in-store digital effort — critical to its omnichannel strategy — have begun to bear fruit.

“All the headwinds they faced last year have turned into tailwinds this year,” said Cannaccord Genuity analyst Camilo Lyon (no relation to the CEO), who upgraded the retailer’s stock to “buy” late last month.

As part of the Macy’s deal, Finish Line has assumed control of the department store’s athletic business and is rolling out branded shop-in-shops in, ultimately, 450 Macy’s doors. “I couldn’t have hoped for a better start,” said Glenn Lyon. “This is a very important initiative for us as a company and for our shareholders, and Macy’s management recognized that. We [knew we would have to] give our blood, sweat and tears to make it successful. [That’s] what we’re doing.”

During the last six months, Finish Line has opened shop-in-shops or placed staff in 190 locations. (In the second quarter, Macy’s business added $30.4 million in sales to its balance sheet.)

Despite fears in the investment community that the proximity of some Macy’s shop-in-shops would negatively impact sales in core Finish Line locations, Lyon said the latest reports show the opposite is true.

“The word cannibalization comes out of the equation,” the CEO said, adding that Macy’s assortment skews more female and more fashion-focused than Finish Line’s core offerings.

While the merchandising is different, one thing that will not change is pricing.

“Our product strategy is assortment-driven, not price-driven, so in the department stores starting Black Friday, there will be a lot of promotions that we won’t participate in,” said Sam Sato, president of the Finish Line brand. “We expect to get some of the benefits of the incremental traffic, but maybe not the full extent because we’re still selling regular-price goods.” (Traffic in Macy’s stores typically spikes 60 percent during the runup to Christmas, far more than the 40 percent increase in Finish Line stores.)

“Louis Vuitton doesn’t have to promote to do business. Neither does Nike,” Lyon added. And so far, he said, there hasn’t been price resistance.

No matter what, Lyon is planning for strong sales this season.

“We have been very aggressive on the inventory side. We won’t [have] empty stockrooms come Christmas day,” he said. “We have enough [stock] to support a really good Christmas. We’re very optimistic.”

The company also has been beefing up staff. So far, it has added 1,500 sales positions and more than 40 management-level jobs to support the partnership. Most notably, Ronnie Jefferson, who earlier in his career worked at Nordstrom, was named VP and DMM for Finish Line Macy’s. (Sato is also a former Nordstrom exec, and Lyon began his career at Macy’s. “For me, this was déjà vu all over again,” the CEO said.)

“We are pleased with the early results from our relationship. The performance in shop doors has been particularly strong, a testament to the quality of assortments and the trained staff they have brought into our stores,” Mastrogiacomo said. “Finish Line has been a good complement to our strength in dress and casual shoes, and we are continuing to see awareness and interest grow among both our male and female customers.”

As Finish Line moves into more Macy’s doors, it also is pumping up its Running Specialty Group.

Last week, that business — a joint venture with Gart Capital Partners — announced it had acquired the four Bob Roncker’s Running Spot stores in Cleveland and Northern Kentucky. Other high-profile buys in 2013 included the three Boulder Running Co. stores based in Boulder, Colo.; and the six BlueMile stores in Indianapolis.

According to Ken Gart, a partner at Gart Capital, the joint venture, which now owns 46 stores, is on pace to hit about 200 stores over the next five years.

“The acquisition front has been our most successful area,” Gart said. “New store openings have lagged a little bit, but you’ll see two new stores in the next 30 days. And we’ll accelerate that.” Gart added that growing the Run.com segment (which covers all the group’s nameplates) also continues to be a priority.

Finally, in Finish Line’s core business, the main focus has been ramping up technology.

Sato said that in the wake of a website overhaul last Black Friday that led to plunging sales and the eventual transition back to the old site, the company has been following an “evolution, not revolution” model. “The consumer is moving so fast today, so we can’t worry about trying something and it not working. We’ve got to move on,” he said.

In store, the company is relying on handheld sales units that allow associates to ring up shoppers or assess whether merchandise is in stock from anywhere on the floor.

“Wall Street criticized us for this, for the amount of capital we invested in [tech],” Lyon said. “But we’re fixated on the customer, and we’re going to make better customer experiences. The fact is, we are a company with a very strong balance sheet. We’re not borrowing money to do this. We’re using our money and investing our money in a way where it’s going to come back to us with a better customer experience.”

The retailer also has reorganized its floors to group apparel and footwear by type (for instance, by running or by basketball), and early results have been encouraging. In the running segment, in particular, sales continue to improve after a challenging start to the year, Sato said.

Looking ahead, Lyon noted the company is focused on not only the opportunities it has but the ones it can acquire.

Finish Line is targeting $2.2 billion in sales by fiscal year 2017, driven by 20 percent growth in digital revenue, a mid-single-digit rise in core Finish Line stores and a $250 million annual contribution from Macy’s and $200 million from the Running Specialty Group. “We’re now up to double-digit growth with the businesses we’ve been involved in, and that double-digit growth can continue for a bit. Then we’ll be looking for more things to do,” Lyon said. “We have our [eyes open] and we don’t stop.”