How to Sell Workboots the Farm-Way 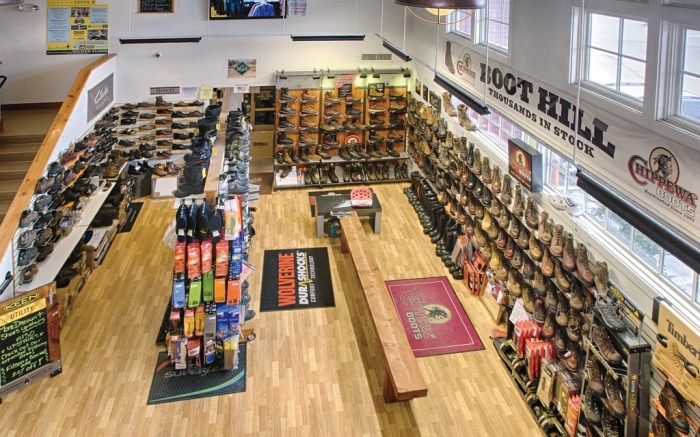 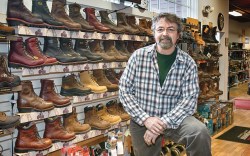 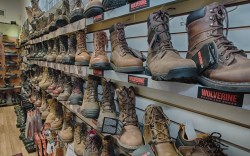 For 30 years, Vermont’s Farm-Way store has been a destination for loggers, farmers and builders seeking dependable workboots. And despite the growing prevalence of online retailers serving the work segment, Farm-Way continues to attract customers with its immense selection, hands-on service and homey atmosphere.

With a product offering spanning everything from camping gear, cookware and pet accessories to furniture, clothing and gifts, Farm-Way resembles an old country store. On Saturdays, the retailer, which occupies several buildings on a 17-acre parcel of land in the small town of Bradford, serves free coffee, homemade baked goods and Cabot cheese while the staff chats up customers.

“We’ve really created a destination, a place where people can come spend an afternoon. We give customers a reason to shop in our store, and that’s been a big factor in our success,” said Skip Metayer, who co-owns Farm-Way with his wife, Carol, and parents-in-law Paul and Bobbie Gallerani.

Footwear is Farm-Way’s highest-grossing category alongside apparel, with annual sales averaging $3 million. Workboots, from brands including Danner, Wolverine, Red Wing, Timberland and Keen, account for about 20 percent of those sales. The store boasts an inventory of more than 20,000 pairs in its shoe department, which also includes casual and outdoor styles. “The selection is a major draw,” Metayer said. “We have 36 different styles of logger boots alone on the wall.”

Michael Shapiro, sales representative for Chippewa, one of Farm-Way’s top-selling work brands, said the store’s massive inventory is a selling advantage. “To be able to show the consumer multiple silhouettes and differing functions in a range of boot styles opens up sales to a wider audience,” he said, also praising the retailer’s multicategory approach. “Workboots are just one part [of the offering]. There are so many departments to shop you could get lost in the store for the day.”

Wolverine sales representative Doug Snyder agreed: “Because they have such a large, diverse selection, customers know they can find exactly what they need. [And the store still] maintains the unique charm and personalized service of a small family business.”

According to Metayer, the work category continues to grow as more employers — from utility companies to oil and propane delivery services — require their workers to wear steel-toe boots. “On-the-job safety is a growing concern for companies, so we’re seeing certain industries move to steel-toe footwear,” he said. “That has given the category a boost and expanded the customer base.”

Still, Metayer said, the challenging economy, coupled with rising boot prices, has impacted the business. “In the past several years, we’ve seen some pretty big jumps in price,” Metayer said. “For example, it used to be $150 for a logger boot, and it’s now almost $300. When you talk about the average working man, that’s a big portion of his paycheck.”

Customers’ expectations regarding product life also have changed, he noted. With budgets tight, workers are hoping to get more wear out of their boots, meaning Metayer frequently fields complaints about what he considers normal wear and tear. “We have customers bringing boots back a year later, complaining about cracks and other issues. Before the economy took a dip, people weren’t as concerned with this,” he said. “Now they’re trying to stretch the life of their boots to a point where it’s just not realistic.”

Although the bulk of Farm-Way’s workboot sales are done in-store, the retailer is working to develop its online business. To attract more traffic, it changed its online moniker to Vermontgear.com. “We found the name Farm-Way was working against us,” Metayer said. “We’d pop up in a search engine and people unfamiliar with us thought we were more of a feed-type retailer.”

Additionally, he anticipates big gains ahead as footwear vendors increasingly demand that Internet sellers adhere strictly to MSRP, leveling the playing field in the online channel. “If everyone has to charge the same price, it comes down to who has the best service and inventory,” Metayer said.

To keep pace with the growth of its brick-and-mortar business, Farm-Way is plotting a possible addition to its shoe department, which uses two 40-foot trailers to house inventory overflow. “This is footwear stock we use on a daily basis, so it’s a challenge for our salespeople,” Metayer said. “We need more space to better serve our customers.”

Farm-Way already enlarged its footwear department six years ago, increasing the store’s total square footage by 70 percent. The expansion resulted in a significant jump in the store’s energy consumption, prompting Metayer and his staff to take a serious look at Farm-Way’s environmental impact and take a more proactive stance on sustainability. Assisted by a grant from the Vermont Clean Energy Development Fund, Farm-Way in 2008 invested $450,000 in the installation of a 308-panel solar farm. According to Metayer, the system now generates 58 kilowatts of power, equivalent to 43 percent of the store’s electrical consumption. The store saves roughly $14,000 annually on its utility costs.

Farm-Way also converted all its lighting to more energy-efficient LED bulbs. And the company is looking into other ways to make its operations greener. “As a business, we believe it’s important to move forward and set an example for others to follow,” Metayer said. “We want to make every attempt to leave a smaller footprint on the environment.”