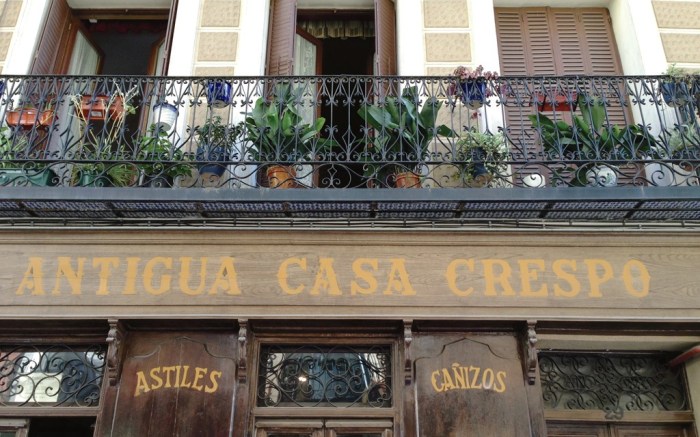 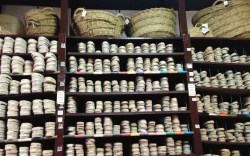 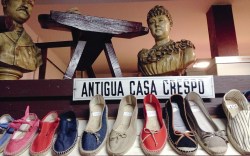 In accordance with local custom, Madrid’s Antigua Casa Crespo is closed midday for siesta. But when the doors are open for business, passersby greet the proprietor by name, with some stopping in for a quick visit while others wave as they walk by.

The cozy neighborhood establishment is one of the few remaining traditional espadrille shops that still handcrafts the classic Spanish canvas-and-jute, rope-soled shoes. Owner Maxi Garbayo is joined by his wife, Ana Ladrón, in his mission to uphold the artisan craft of Spain’s iconic footwear style.

Founded in 1863, the business has been run by four generations of the Garbayo family. Since the start, little has changed in the façade of the store, which still features wooden doors and windows. Located in the hip and creative district of Malasaña, Antigua Casa Crespo’s old-fashioned appearance echoes its offering, and Ladrón said visitors often tell her the store looks like a museum. (Some of the décor consists of historic relics and the busts of Garbayo’s ancestors, including Leopoldo Crespo, the son of the original founders.)

The 753-sq.-ft. store stocks a colorful selection of espadrilles for men, women and children, stacked on ceiling-high wooden shelves. Variations of the classic design, which is made of a canvas upper and jute fiber bottom, sport a slingback or ribbons that lace up and tie at the ankle. The espadrille aesthetic also is incorporated into a selection of boots, sneakers and sandals.

“Our clientele is varied — families that have passed on the tradition of buying espadrilles in our shop [as well as] many tourists looking for something genuine and with history,” said Ladrón, noting that the store has been featured in travel magazines and guides, making it a shopping landmark for foreigners visiting Madrid.

“When the first ray of sun appears in the spring, lines of people begin to form [at Antigua Casa Crespo] to buy an espadrille,” said Bina Daigeler, costume designer for the 2006 film “Volver,” which utilized shoes from luxury espadrille designer Castañer and from Antigua Casa Crespo. And since the release of the film, the featured shoe has been renamed Penelope and continues to be one of the shop’s best sellers.

Antigua Casa Crespo’s shoes are made in the La Rioja region in the north of Spain, an area well known for the production of authentic espadrilles. Ladrón takes the lead on designing the shoes, while her brother manages the manufacturing process. Prices range from 8.50 euros, or about $11 at current exchange, for a basic flat to 50 euros, or $66, for more sophisticated designs. Ladrón said next spring customers can expect to see the classic flat shoe in a variety of textiles, including stripe and flower patterns, and embroidered fabrics.

Espadrilles, or alpargatas as they are called in Spain, have been worn by the Spanish for more than seven centuries. Originating in the region bordering the Pyrenees, they were a popular footwear choice for peasants and farmers for the low price and comfort. At one point, they were even part of the country’s military uniform. “It’s a shoe that has a lot of history,” said Daigeler. “If you look at pictures of the [Spanish] Civil War, there are scores of republican soldiers wearing them because they did not have boots.”

The espadrille later became associated with the likes of Salvador Dali and Pablo Picasso. When designer Yves Saint Laurent added the wedge heel in the late 1960s, the shoe became a sensation among the most stylish of women, including Jacqueline Kennedy Onassis. One characteristic has remained consistent to the ever-changing style: its braided rope sole.

For the Garbayo family, upholding the customary craftsmanship of the espadrille is a priority. “No two pairs are alike,” said Garbayo. “That’s why you must try on several pairs until you find the ones that fit you,” he said. In fact, Queen Sofia of Spain once had the entire block, as well as the store, closed in order to try on the espadrilles herself. And although that was in the 1980s, the Queen still requests several of her favorite styles from the shop.

But Antigua Casa Crespo’s one-of-a-kind product offering also has created some challenges when it comes to growth and sustainability. “The industry is very competitive,” said Ladrón. Given that the company’s shoes are handmade, Ladrón cited difficulties competing with Chinese manufacturers, which are better able to meet the demands of high production through the use of machines and other labor-saving processes.

Dr. Marsha Dickson, professor and chairperson of the Department of Fashion & Apparel Studies at the University of Delaware, is an expert in the artisan development field. “Retailers have very limited tolerances. … They want everything identical,” she said. “That’s not necessarily understood or appreciated by an artisan who would like to vary things.” However, Dickson added, the interest in handmade goods and local production is on the rise.

Despite Spain’s current economic crisis, Garbayo and Ladrón remain optimistic about opening a second store one day, thanks to what they say is a resurgence in customer interest in local businesses and the desire for a more personal customer experience. “I have hope, that people will start to realize that not everything is about [price],” said Ladrón, “and there are artisanal goods that should be paid for according to their due [value].”