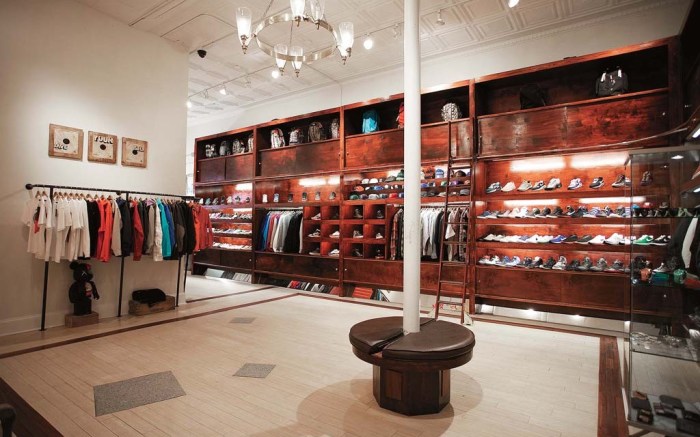 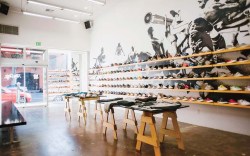 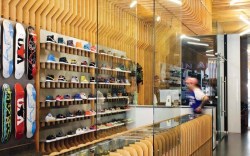 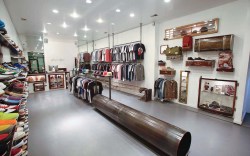 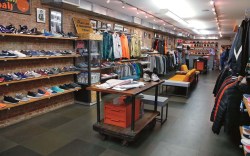 In a crowded landscape, FN surveyed vendors, bloggers and influencers to determine the most highly regarded and authoritative stores in the U.S. — listed here in alphabetical order.

Bodega
Location: Boston
Owners: Jay Gordon, Oliver Mak & Dan Natola
Bodega’s speakeasy-style hidden entrance (shoppers walk through what looks like a convenience store to get to the sneaker space) might be intimidating, but the 1,300-sq.-ft. store is designed to lure all customers, from curiosity seekers to true diehards, according to the owners. And the product follows suit: In addition to the obligatory sneaker releases from Nike, Reebok, Converse and Vans, the 7-year-old store makes space for lifestyle men’s labels including Diemme, Pointer and Yuketen.

Burn Rubber
Location: Royal Oak, Mich.
Owners: Rick Williams & Roland Coit
Detroit loves sneakers, and Burn Rubber loves Detroit right back. Opened in 2004 and taken over by Williams and Coit in 2007, the 680-sq.-ft. shop sells the industry’s most limited product, but it also is known for incredibly detailed collaborations that tell the story of Motor City. This summer’s “Spirit of Detroit” Reebok Classic Leather shoe, for instance, paid homage to the city’s iconic downtown sculpture. The retailer took its business to the next level earlier this year, opening Two/Eighteen by Burn Rubber, a menswear apparel boutique on the same street in Detroit’s Royal Oak suburb. Next up: The shop will release sneakers with New Balance this month that take inspiration from the city’s boxing heritage, and next year it will carry four releases that bring together Reebok’s GL 6000 shoe and owner Williams’ apparel brand, Distinct Life.

Concepts
Location: Cambridge, Mass.
Owner: Tarek Hassan
If coveted collaborations are a measure of success, then Concepts, born as a shop-in-shop in Boston’s venerable Tannery in 1996 and given its own space in 2008, is coming up aces. Powered by a full-time staff of six designers who focus on limited-edition footwear and apparel projects with top brands such as Sorel, Nike and Sperry Top-Sider, Concepts has produced hit after hit, like this summer’s sellout New Balance C-Note. The special editions share shelf space with other limited and mainline sneaker and boot offerings, from streetwear favorites like Vans, Adidas and Timberland, as well as high-end labels such as Lanvin. Concepts also reaches beyond its single brick-and-mortar location — a sleek, custom-designed space with a recording studio above and private, invite-only lounge below — with its website. Next year, the sneaker boutique takes its show on the road with its first pop-up, set for January in London.

Extra Butter
Locations: New York & Rockville Center, N.Y.
Owners: Ankur Amin, Nick Amin & Jason Faustino
The fall season has been big for Extra Butter. Since opening in 2007, the cinema-themed shop has increased sales every year — up 60 percent last year and projected to grow 45 percent in 2013. For fall, Faustino and crew dropped an appropriately film-inspired pack of retros with Asics, and last month they opened a second location on Manhattan’s Lower East Side. The 2,300-sq.-ft. space boasts a private room in the back that the team plans to use for pop-ups and installations. And Faustino said the new store will bring in brands beyond its bread and butter of Nike, Jordan, Asics, New Balance, Sperry Top-Sider, Puma, Vans and Adidas. “I’m looking for new, fresh things,” he said. “In the Lower East Side store, I can be a little more experimental.”

Packer
Location: Teaneck, N.J.
Owner: Michael Packer
For more than a century, Packer has been a shoe destination, but only since 2003 has it been a hotspot for sneakerheads. The 1,200-sq.-ft. shop stocks the latest from stalwarts such as Nike, Jordan, Puma, Adidas and New Balance. But Packer’s retro sensibility means under-the-radar classics from Pony, Ewing and Fila get shelf space, too. “It’s not just about being wedded to one brand. We try to do projects across the brands we carry,” Packer said. Next year, as the store celebrates the 10th anniversary of its move to Teaneck, look for special releases in keeping with that philosophy.

Saint Alfred
Location: Chicago
Owners: Silent partners
Since 2005, Saint Alfred has been all about the story. According to buyer and store manager David Rasool Robinson, that means more than just bringing in the hottest sneakers and the latest releases (although they are there, too). It also means introducing newness to the Windy City. The staff always looks to “educate our consumers on a specific piece or brand because the backstory further builds their pride in what they’ve purchased,” Robinson said. And through collaborations such as this summer’s Chicago Lakeshore-inspired Asics Gel Lyte III, Saint Alfred aims to share Chicago style with the world. “The shop is a direct reflection of the city,” Robinson said. “Most, if not all, of our graphics [and collabs] are inspired by the city.”

Ubiq
Location: Philadelphia
Owner: John Lee
Though Philly might get lumped with New York when people talk about streetwear, for the past 11 years the City of Brotherly Love has had its own unmistakeable identity in the sneaker game thanks to Ubiq. The retailer soon will celebrate 10 years in its flagship on tony Walnut Street, where it has built a reputation for offering all the limited releases in one spot, including those from Nike SB. In fact, the store is one of the few non-core skate shops to stock that line. And Ubiq frequently puts on elaborate events to celebrate its collaborations, such as a bash on Nov. 9 for the store’s joint venture with Vans that featured legendary tattoo artist Hiroshi Hirakawa giving tattoos in the shop window. “Philly is a huge sneaker town and the community is strong,” said store manager Woody Kumetat.

Undefeated
Location: Los Angeles
Owners: Eddie Cruz & James Bond
Founded in 2001 in Los Angeles, the sneakerhead haven is more of an empire than a store, now counting four locations in California, one in Las Vegas and two in Japan, as well as a brisk e-commerce business, its own apparel line and a name that’s all but synonymous with exclusive drops and some of the most sought-after collaborations. Undefeated kept momentum going in 2013, dropping a Bringback Pack of retros with Nike and a collaboration for back-to-school with streetwear brand CLOT and Converse.

West NYC
Location: New York
Owner: Lester Wasserman
Wasserman grew up in the shoe business, and it shows. In the sneaker shop-heavy town of New York, West NYC — the Upper West Side boutique Wasserman opened in 2007 — has made a name for itself with limited releases across the brand spectrum. Decorated in a style Wasserman calls “MTV’s ‘Remote Control’ meets man cave meets ‘That ’70s Show,’” the 1,000-sq.-ft. store has seen sales grow every year since its debut, driven by not only the local sneakerheads but tourists and outer-borough enthusiasts who wait in line for all the new releases, even as many as six a week. West launched e-commerce this summer in conjunction with the Tequila Sunrise Saucony Shadow 5000 shoe, created by Wasserman and his team. Future offerings include a second Shadow 5000 colorway called Cabin Fever and a New Balance shoe set for early in the fourth quarter.

Wish
Location: Atlanta
Owner: Lauren Amos
Taken over by Amos and reborn as a sneaker shop in 2005, Wish has become Atlanta’s prime destination for the best-curated and most limited footwear. Housed in the former Carnegie Library building in the city’s Little Five Points neighborhood, the 3,212-sq.-ft. shop is designed to resemble a “footwear library,” said store buyer Frank Cooke. Taking up the entire first floor of the two-story space, the sneaker offering includes all the standards, as well as some fashion-oriented styles from the majors, including Adidas’ Consortium and Vans Vault. “Our clients and customers always want to be forward, want to be first. We’re the editors for [their fashion] lifestyle,” Cooke said.