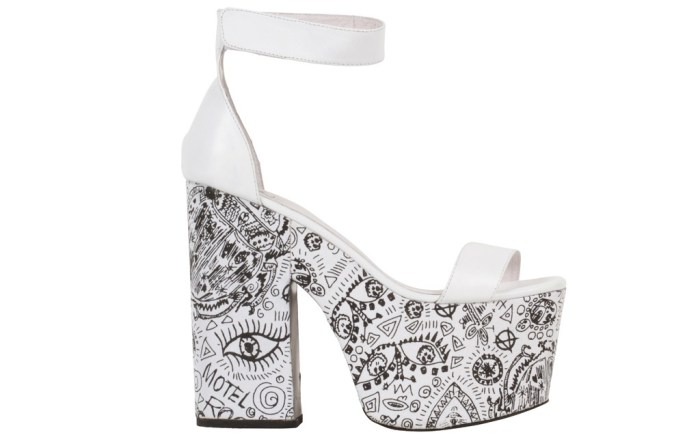 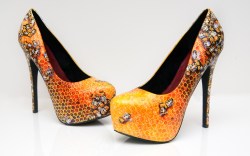 Campbell on the Rocks
Jeffrey Campbell is starting spring with a new collaboration. The footwear label has teamed with British women’s apparel brand Motel Rocks for a limited-edition collection composed of three shoes and 10 clothing items. The Motel Loves Jeffrey Campbell footwear, which was unveiled at the Pool trade show in Las Vegas this week, features contemporary street-inspired looks. The offerings are slated to hit select boutiques and the Motel Rocks website over the summer. “This is Motel’s first foray into footwear,” said Motel Rocks Managing Director Peter Giles. “We have always had a great relationship with Jeffrey and share a similar brand ethos — to create styles that break with tradition and set new trends.”

Gifting Gaga
The designers behind Seattle startup Hourglass Footwear had their first brush with celebrity earlier this month when the Xcel Energy Center in St. Paul, Minn., commissioned a special pair of heels for Lady Gaga to thank her for performing at the venue. “To be [selected] for such an enormous, exciting project would be an honor for a company 100 times our size,” said Hourglass co-founder Kira Bundlie, who created a pair of platform pumps hand painted with a beehive theme. Bundlie and partner Lisa Strom, who had just 23 days to complete the style, traveled to the Twin Cities to deliver the shoes. “We had an official unveiling on the morning of the concert, and then the shoes were taken backstage,” Bundlie said. Added Strom, “I’m sure we’ll be refreshing our browsers like crazy for a while. We’d love to see them on her feet.”

Hot Wheels
United Nude is hitting the fast lane with its recently acquired company limo. Before hitting the road, the company’s white, 1984 Cadillac — purchased in December after co-founder and creative director Rem D. Koolhaas spotted the car in the classifieds during Art Basel Miami Beach — got a wild paint job courtesy of artist and brand collaborator Niels “Shoe” Muelman. The limo cruised Miami before heading to New York, where it ferried a select group of editors and bloggers around Manhattan during fashion week to promote the label’s spring ’13 footwear. “[The stunt was] a super-cool way to launch the Calligraffiti shoe that Niels designed,” Koolhaas said, adding that the limo is currently parked outside United Nude’s New York boutique, where it will remain until the limited-edition collaboration sells out.