What’s Up With Wild Socks? 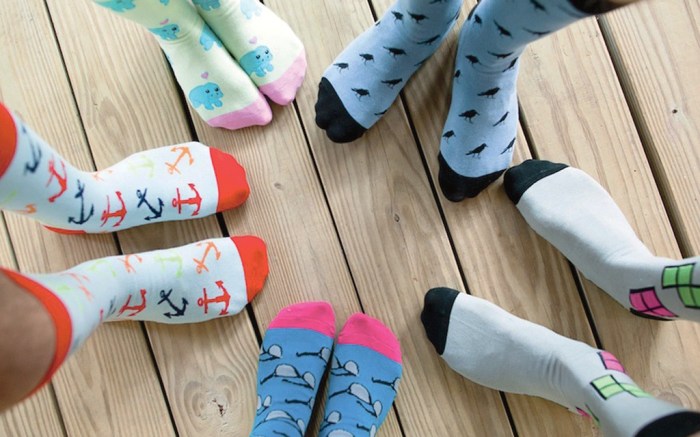 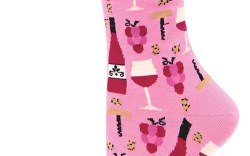 Now is a good time to be in the sock business, especially one that sells offbeat prints or bold graphics.

“Socks are the go-to accessory,” said Emily Ross, national accounts manager at Hot Sox, which was founded in 1969 but underwent a relaunch in 2012 that included a heightened focus on fashion-forward looks and the addition of men’s product.

Indeed, socks are having a major fashion moment among both men and women, with novelty styles proliferating from mass market to high fashion and bold looks adorning the ankles of A-listers like Rihanna, Sarah Jessica Parker and Justin Timberlake. Celebrities are even getting in on the business side, including Rob Kardashian, who launched the label Arthur George last year, and Jay-Z, whose company is a stakeholder in Stance (see page 28).

While sartorial socks aren’t new to the hosiery market, their recent revival has invigorated brands and spawned new ones. “Every five years or so, [the novelty socks trend] seems to come back with increasing meaning and new twists,” said Karen Bell, founder of California-based K. Bell, which is growing its sock mix with innovative additions such as 3-D prints and a made-in-the-U.S. capsule.

Women have started taking sock cues from high fashion — Vivienne Westwood and Prada were among the designers who featured bold socks in their spring ’14 fashion week shows — and layering those with tights and booties for a street-worthy vibe. “The runway changes the way the fashion-forward consumer looks at socks,” Ross said. “From knee-highs to trouser lengths, [spring runway] socks looked very fresh, young and relevant.”

Another big twist for socks is reflected in the increasing demand for fashion-focused men’s styles. Labels targeting men are cropping up at all price points, and according to a report earlier this year by The NPD Group Inc., men’s sock sales in specialty stores increased 39 percent in 2012.

Sally Kay, president and CEO of The Hosiery Association trade group, expects that segment to keep growing. “Novelty and fashion-forward socks should remain popular in the menswear market,” she said. “They provide an opportunity for [the male consumer] to express his own sense of style. Some prefer to accessorize with socks rather than ties or coordinate socks with ties.”

Tim Morse, co-founder and CEO of 3-year-old Richer Poorer, said he started his company as a sock brand based on a “cultural shift” in men’s work attire, although he has since expanded into other categories. “Men’s buying trends are starting to catch up to women’s,” Morse added, noting that his firm is on track to triple its overall sales for 2013. And he’s bullish about 2014 as well. “We are experiencing tremendous growth both at the wholesale level and the [direct] retail level.”

Some of the favorable buzz can be attributed to a more sophisticated marketing approach. “Choosing socks that reflect mood and personal style has become as important as picking out a key item of clothing,” said Isaac Ash, president and CEO of United Legwear Co., the North American licensee for Happy Socks. Happy Socks epitomized the idea of elevating anklets and knee socks with its fall ’13 ad campaign, shot by David LaChapelle. It features male and female nude models and dancers in nothing but bright patterned socks, as well as some scantily clad models in high-fashion apparel in highly stylized settings.

As the market has gotten more creative, so has the method of sales. The subscription model has taken off among multiple startups. Sock Panda and Foot Cardigan are just a couple that charge a monthly fee to mail a surprise pair of patterned socks. “For people who might be afraid to go out on a limb when it comes to fashion, socks are literally and figuratively a way to dip their toes,” said Bryan DeLuca, co-founder of Foot Cardigan, which grew significantly internationally its first year. Past offerings from the brand have included socks emblazoned with flying saucers, squirrels, neon polka dots and geometric patterns.

Despite the excitement in the market, many wonder if the novelty sock trend is sustainable. Industry insiders predict it is, as long as designers and vendors are willing to go with the flow and adapt their product according to market changes. DeLuca said he’s under no illusions that the subscription model will last forever, and Foot Cardigan has a strategy in place to add non-subscription offerings as well as wholesale in the next few years.

Like Foot Cardigan, Richer Poorer is blueprinting its next moves. “I anticipate we might start seeing a design shift away from the big, bold design elements into more of a timeless [look] that’s a little more subdued,” Morse said. “We aren’t so focused on the novelty. We want to create a timeless design that’s relevant now and will be relevant in five years.”

To that end, his label will introduce an athletic line in spring ’14 and is working on collaborations and brand extensions for its recently launched kids’ and women’s sock categories, as well as men’s boxers. “We won’t just be a sock company for the long haul,” Morse said.