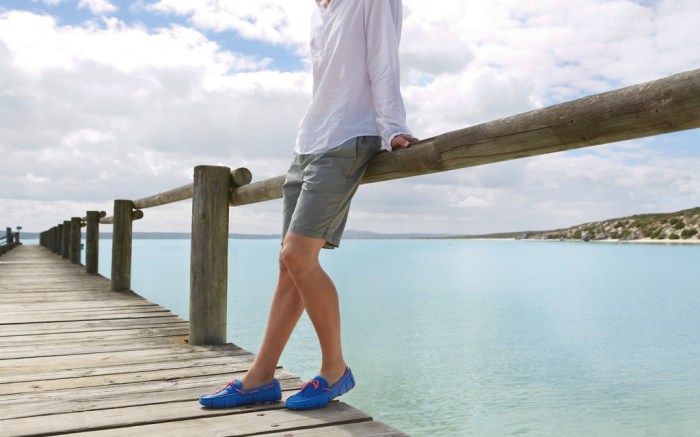 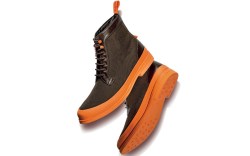 Norwegian brand Swims knows that when it rains, it can pour — and that’s a good thing.

Launched in 2006 with a single galosh style, the collection has evolved into a water-friendly lifestyle brand of outerwear, umbrellas and bags for men and women. To present the complete Swims package, the company now is focused on retail and is set to open its first concept store, in Bahrain. Swims also is aggressively growing its string of shop-in-shops with locations inside Citadium stores in Panama, Peru and Venezuela, as well as Hield Brothers in Saudia Arabia. Two locations in Norway will bow next month.

Distributed in more than 25 countries and 700 stores, Swims derives 30 percent of its revenue from the U.S. “We’ve just scratched the surface of the U.S. market and are now experiencing some brand recognition,” said CEO Alex Eskeland, noting Saks Fifth Avenue and Scoop are among its retail partners. Although the label is most recognized for its colorful galoshes, newer product launches such as lightweight TPU loafers and waterproof wingtips for men are garnering significant attention.

Eric Jennings, VP and fashion director of menswear for Saks Fifth Avenue, picked up the line’s more traditional looks. “I saw them at Pitti Uomo in Florence and got to know the designer,” said Jennings. “The offering had expanded [beyond galoshes] and were on-trend with what was happening in men’s footwear. There’s a functional value behind them that closes the sale.”

To grow the footwear collection, the company hired Norwegian designer Catherine Meuter, whose background includes stints at Nicholas Kirkwood and Giorgio Armani. She was tapped for the job after developing a signature Emporio Armani by Swims men’s galosh in fall ’12.

“We wanted to move into more of a traditional shoe business and not just have molded footwear,” said Swims founder Johan Ringdal. “Catherine has brought a deep knowledge of how to make traditional shoes.” Meuter’s first stamp on the line is the fall ’13 men’s series called Harry, composed of a waterproof oxford, zip-front ankle bootie and outdoor-inspired lace-up boot.

Still, Swims’ colorful men’s loafers, introduced in 2010 and retailing from $149 to $179, have become the brand’s key item. “They’re the backbone of the international business,” said Eskeland, noting they account for 60 percent of sales. “We caught on to something. We reinvented the category by introducing classic styles that are water-friendly and an alternative to boat shoes. All of a sudden, [stores] have a product they can do in big volumes, like Ugg Australia and Hunter. It’s one style with broad appeal.” Fall loafers are being added for the first time this year, including a tassel style, sport look and sport high-top in navy, black and gray.

Jay Hartington, owner of Marissa Collections, a boutique in Naples, Fla., has been carrying the loafers since their debut. “It’s a sophisticated look, but has the ease of a casual material and at a good price,” said Hartington. “It’s [popular] with our regulars as well as walk-ins.”

At Scoop in New York, Bryan Reynolds, DMM for men’s, launched Swims loafers in all Scoop doors in spring ’11. Based on the success, he plans to add the fall ’13 versions. “It’s a year-round look,” Reynolds said, noting that the fall men’s hiking boots have been successful as well. “We sold out of the [fall ’12 Charles high-top brogue, retailing at $239]. The colors resonated with [consumers].”

While Swims’ men’s business has taken off and now accounts for 85 percent of sales, women’s remains a challenge. “Women are more fashion-driven, and Swims is more function-driven,” said Eskeland. “We’re working hard to develop a women’s line, but it’s complicated with molded products because they’re technical and [require] a high skill set. And you need high minimums. We need to build [the category] slowly to get the volume to do more colors.”

Swims also is working to expand its accessories offering, which makes up 5 percent of the collection. “Our automatic umbrellas have become quite [popular] in Italy and Germany,” said Eskeland, adding that Swims’ outerwear-focused apparel represents half the brand’s business in Scandinavia. “Our small capsule collection of water-resistant bags is gaining momentum every week. We see an opportunity in the market between the classic Longchamp and The North Face, which is very sporty and technical.”