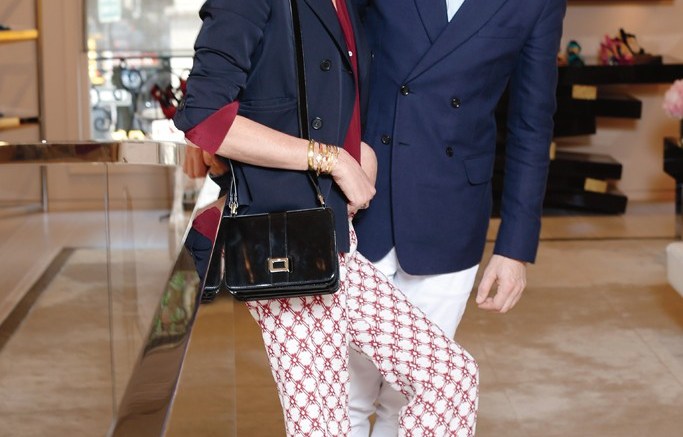 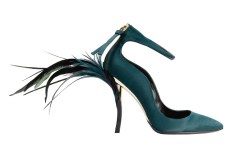 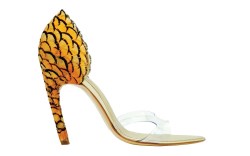 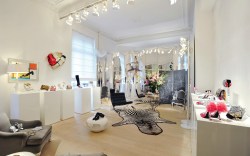 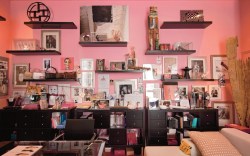 “I think: Is she having sex in it or not? To me, if she’s not, it’s not the right shoe,” said the creative director, leaning forward.

Inès de la Fressange, the label’s muse, seated to his right, recoiled in mock horror. She wisecracks: “He’s French and Italian. You’ll have to excuse him.”

Their easy banter continued throughout an hourlong conversation and underscores the unique chemistry between the two, who have spent the last decade rebuilding the 76-year-old fashion label.

“[Inès and Bruno] are both super-talents — wonderful, big personalities with a love of life and people — and there’s no question [they are walking billboards for the brand],” said Ron Frasch, president and chief merchant of Saks Fifth Avenue.

Today, Vivier is one of the growth drivers at parent company Tod’s Group SpA, which acquired the label in 2003. Annual revenues more than doubled in 2012 over 2011, reaching 74.5 million euros last year, or $97.3 million at current exchange.

Under Frisoni’s stewardship, Vivier has evolved from a luxury shoe line into a full accessories label, encompassing footwear, handbags, small accessories and sunglasses.

The creative director has become known for designs that blend artistry and masterful craftsmanship, leading to hits like the Prismick. At the same time, he never loses sight of the brand’s rich past, putting a modern twist on original Vivier signatures such as the comma heel and buckle motif.

In the Rizzoli-produced Roger Vivier coffee table book that Frisoni and de la Fressange recently fêted in New York, actress Cate Blanchett said, “You look at Bruno’s shoes and there is so much history involved that you can just pick a thread to unravel it.”

Retailers also were quick to laud the label — and Frisoni — for exuding Parisian elegance and sophistication.

“Their customer is a woman who doesn’t need people to know what brand she’s wearing, but still, everyone looks at her feet. It’s someone who has a great appreciation for integrity of design,” said Frasch, noting the label’s sales continue to show remarkable improvements at Saks season after season.

Rebecca Farrar-Hockley, buying and creative director of Kurt Geiger Ltd., agreed: “Much of the appeal of Roger Vivier is in the combination of heritage while feeling like a truly modern luxury brand that’s ultimately wearable and not solely reserved for special occasions.”

De la Fressange, for her part, likes to describe the essence of Vivier as “something that’s elegant with a twist, never boring.”

Colleagues observed that the same thing could be said of the relationship between her and Frisoni.

“In Bruno’s world, everything is very minimal — white, clean. Inès’ office is pink and bizarre. She feeds him to a certain extent, and it’s the mix of both that brings success,” noted Sabine Brunner, GM of Roger Vivier.

With the duo driving Vivier’s renaissance, Tod’s is now looking to take the business to the next level.

It aims to grow Vivier’s fledgling wholesale business, which is limited to key accounts such as Saks and Neiman Marcus in the U.S., and Harrods and Selfridges in London. Plans also include expanding its retail network. For now, the brand operates 15 doors worldwide but will have 20 by the end of this year, including new openings in Singapore and China.

“We want to take it step by step. We’d rather have the right stores in the right locations with the right visibility,” Brunner said. “One day we will have 70 of them worldwide, and that will be it.”

In a rare joint interview, Frisoni and de la Fressange open about reinvention and reveal the secrets to making their unique partnership work.

How would you describe your designer-muse relationship?

BF: She’s great for pushing the brand, dealing with people and communicating with others. It’s nice because I talk to her as a partner, someone who will come up to you and [tell you frankly if something doesn’t look right]. She’s really inspiring because she has her own way of understanding fashion.

IDF: Mainly it’s because I’m a fashion addict, not to mention a shopaholic. But I’ve been a designer and a businesswoman, so I can understand both [perspectives in running a successful brand]. I don’t have a title [in the company], but sometimes it’s good to watch things a little bit from the side and not be afraid to say things. One thing I can say is that he doesn’t need any ideas from me. He has too many ideas.

What is it like being part of the Tod’s group?

BF: We go hand in hand. [Chairman and CEO Diego Della Valle] has a vision for brand development and a vision of what should be designed and how it can evolve at Roger Vivier. The only thing that sometimes [creates differences] is that sometimes things move too slow for me. As you know, designers are always trying to go further and faster. But it’s been a great journey, evolving a brand that was primarily known for shoe design into a proper accessories brand.

IDF: Diego and Bruno share the same idea about the spirit of Vivier, remembering what luxury is, but also eccentricity. There are not so many businessmen nowadays who give that much confidence to a designer and offer them so much freedom to create.

What is the key to bringing a modern spirit to such a storied brand?

BF: I believe I am modern. If not, I wouldn’t be here. Also, Roger Vivier himself was very modern. I always speak of the choc heel because I didn’t have to do much, except maybe redesign it a little bit to make it lighter, while adding new heights, new styles and new lasts.

IDF: I’ve never heard Bruno say that something is modern or not modern. Either it’s beautiful or it’s not. For him, designing is natural. It’s not like he is doing something he doesn’t like. Bruno is a very strong person stylistically, so it goes very well with the Roger Vivier spirit.

Does it bother you that other brands have copied, in one form or another, your designs?

IDF: You know, I recently walked into the shop of a very famous Italian brand and I was very surprised to see buckle shoes. It was so obvious [it was a copy because] the proportions were bad. But it would be a huge problem to obsess about that. Don’t forget that Roger Vivier himself practically created the stiletto heel.

BF: And the choc heel, for example, is very much used by other people, too. In any case, fashion is really about novelty. People copy things that are already old. [My job is] to create something new. Anyway, being copied means people look at you. As Yves Saint Laurent said, imitation is the highest form of flattery.

Speaking of the buckle, how do you approach creating icons for the brand?

IDF: We don’t predict what things are going to be classics. There are so many companies that just want to push a product and decide it’s going to be a signature product, but it’s not a natural [process]. It’s the customer who decides it. Take the Prismick line: It’s such a best-seller, but when he designed it, we had no idea it would turn out this way.

BF: Every design brand has to be recognizable. [With the Prismick, all I did was to design something] with a heel and that was geometric, faceted and had volume. After some years, we understood that [people were] coming back for it, so we made it a signature finally because we found it intriguing and very special. But in the beginning, it was just something that happened to be working.

How much do you keep tabs on your competition?

BF: Competition generates excitement. To me, fashion and design are about creating something special and different. We share the customers, you know. People can come to us after shopping at Chanel, then go to Christian Louboutin, then go to Manolo Blahnik.

IDF: He’s too kind. [If I point out something displeasing someone else has done], he will say, “No, it’s not that bad.” I’m the mean one all the time.

Which young designers have attracted your attention?

BF: Nicholas Kirkwood and Charlotte Olympia Dellal. I know it’s been some years since we’ve known their names, but they’re different. Pierre Hardy is someone whom I admire very much, and while he’s not a young designer, he’s one of the most important ones today.

Do you regret closing your eponymous label?

BF: It was something I had to do. And when it’s something you have to do, you have no regrets. The line was very strong, but I was a very little company and I didn’t find the support I was looking for to make it happen today. [At Roger Vivier], it’s been great for 10 years. I’m not a great entrepreneur. I was maybe lacking the ability to make some right [financial] decisions. At Vivier, I just design. The rest is their problem.

Will you try again?

BF: It’s a sleeping beauty. If a great prince arrives to give me a kiss, maybe. We’ll see.

The Plume de Soir, spring ’05
“Nicole Kidman wore them. The idea was [to show] a nude foot with feathers only at the back: sexy and very ‘animal.’ So I used crystal PVC for the front and I covered the choc heel with feathers.”

The Eyelash, fall ’13
“The Eyelash was literally born of a picture of [actress] Marlene Dietrich in this beautiful black feather dress in an old movie. That kind of glamour was always something I tried to capture, along with the wild, magical effect of feathers. The heel, I call it vertigo, because it looked like a reinterpretation of the virgule [or comma heel]. I was drawing when my pen just went across the page, and there we had it.”

The Virgule, fall ’13
“[I created] new heel heights this season — modern versions of the fantastic original design created by Roger Vivier in 1963. [He had] designed the virgule heel when he left Christian Dior, as a way to break away from what he had created there.”