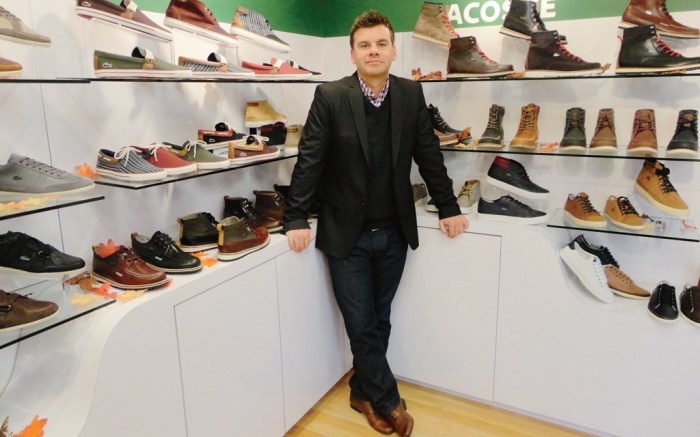 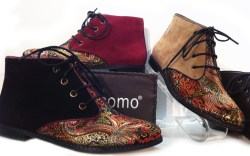 Vendors attending the FFANY trade show in New York last week were optimistic about overall growth going into 2014. However, a crowded market and a hard-to-penetrate department store environment were among their chief concerns.

“It feels like across all our brands, we finally have the needles all pointing in the same direction,” said Angel Martinez, chairman, president and CEO of Deckers Outdoor Corp. He noted the firm will focus on expansion moving forward, after spending the past year bringing its Ugg Australia label back from the brink. “We’re in the driver’s seat now,” he said, adding that the outlook is good for Deckers.

Other vendors were upbeat about the potential of improved or specialized product offerings.

David Grange, president at Lacoste North America, pointed out that the firm’s sportswear collection — premium men’s and women’s shoes that emphasize quality and branding — have been a boon to the company, which expects a 13 percent jump in sales for the first six months of 2014. “People are prepared to pay more for premium products,” Grange said, noting that Lacoste also tailors items to the needs of retail partners such as Nordstrom. “Our business is in good shape. We have a strong collection backed up by a good team across sales, marketing and logistics.”

New York-based women’s designer Paul Mayer said his eponymous label has received more requests for exclusives from its wholesale partners. “We allow them to do a lot of different things depending on region,” Mayer said. “What happens in New York in November is not what happens in Florida or Texas in November. There is still a lot of opportunity in department stores, but you can’t be everything to everyone — and you shouldn’t.”

Footwear Unlimited Inc. has used that emphasis on custom product as an opportunity to hone the indie look and branding for its newest label, 1-year-old Latigo. “There’s a hunger for unique product that has a strong sense of Americana that relates to our economy and the state of the country,” said the firm’s GM, Andy Smith, who cited an expanding market for vintage- and DIY-inspired fashion as significant influencers for fall ’14. “The growth for us is in boutiques, [directional] chain stores like Anthropologie and e-commerce. E-commerce is the new boutique.”

In the luxury sector, interim collections were top of mind. Cesare Casadei told Footwear News that pre-season footwear has grown to represent more than 60 percent of the Casadei brand’s fall offering.

And pre-fall has been a major factor in the success of emerging designer Paul Andrew. “This is my second season doing pre-fall and it continues to grow for the brand and become more important from a business perspective,” Andrew said.

Despite an overall feeling of bullishness, brand executives still expect difficulties in every category and price point. Hurdles at the high end include accommodating an increasingly global fashion consumer. “The biggest challenge for me is designing fall collections that still work in markets that don’t have cold weather, such as the Middle East and Asia, which continue to be important for our brand,” said Edoardo Caovilla, COO and creative director at Rene Caovilla. “Creating styles that work in various climates is difficult, but essential now.”

And for contemporary brands, the biggest opportunity — a demand for exclusive (or at least seemingly exclusive) distribution — might also be the biggest complication. “It’s always a challenge for boutique brands,” said Max Harrell, president of CC Corso Como, which has concentrated on improving its namesake and Ballasox brands for fall ’14. “We have the product. [The hard part] is getting the distribution and having it out there so the consumer can find it.” Still, the executive was upbeat headed into fall. “We’re very excited about the future because there’s so much freshness in our lines.”