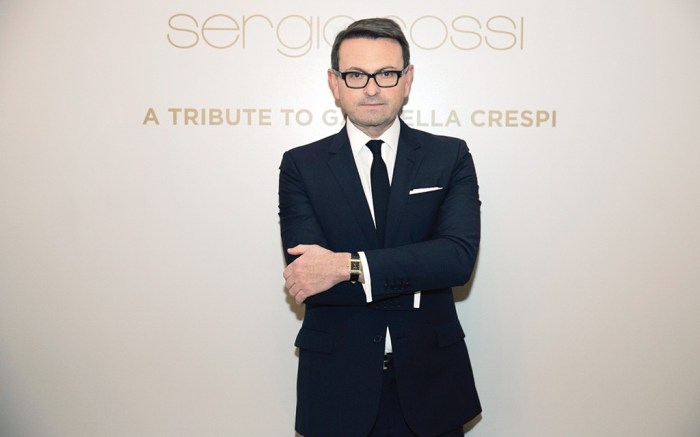 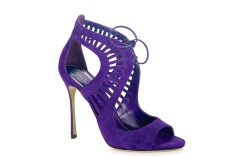 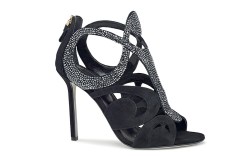 NEW YORK — With a new creative team in place, Sergio Rossi is forging ahead with global expansion, starting with the U.S. market.

CEO Christophe Mélard noted there is room to grow through both wholesale and retail.

Eyeing the brand’s competitors, which include Manolo Blahnik, Jimmy Choo and Christian Louboutin, the executive said, “If you compare my market share with these giants, I can only grow. Even if I was able to take just 10 percent of their business, it would represent a lot of growth for Sergio Rossi.”

The label bowed a new store at The Forum Shops in Caesars Palace in Las Vegas in April, and Mélard is plotting more retail expansion.

“My dream is to have a flagship in New York and Los Angeles,” he said. (The brand previously operated stores in the cities, but closed them four years ago.)

Mélard is equally bullish on the wholesale opportunity. “My plan in the coming years is to improve visibility in key wholesale doors in Barneys New York, Saks Fifth Avenue and Neiman Marcus. We have big, big opportunities through our wholesale partners,” he said.

The timing is right for a stateside push, according to Laurent Claquin, head of Sergio Rossi parent company Kering Americas.

“Sergio Rossi has done a great job repositioning the brand for the last few years, first in Europe and then in Asia. Now we’re really back in the U.S. in a very strong way,” Claquin said.

While the label would not reveal sales or profitability figures, it has 84 branded stores worldwide, 30 of which are operated by franchisees.

When Sergio Rossi discovered two years ago that the Hong Kong flagship, in Harbour City, was its top-performing door globally, Mélard decided to buy back part of the franchise network in Asia-Pacific, as part of a plan to ramp up the brand’s presence in major cities such as Beijing and Shanghai.

Japan, which is a challenging market for many high-end companies, is a bright spot for Sergio Rossi, which directly operates 20 stores there.

Meanwhile, Italy and France remain strong markets for the label, and Switzerland, the Benelux countries and the U.K. are showing promise. With Chinese tourists propping up luxury retail in Europe, new flagships are set to bow in Milan, Paris and Moscow.

The brand’s latest retail concept, launched in Rome in 2010, was developed with London-based interior design firm Studioilse. It features shoes displayed in multilevel, brightly polished brass cubes near the store’s front, contrasted by velvet curtains wrapping the walls and plush carpets, in rich, dark shades, toward the back.

Catering specifically to a customer’s needs in a particular region is especially important to Mélard, who will go so far as to merchandise each store differently.

Noting that consumer tastes differ slightly between New York, Miami and Las Vegas — and even more so in China and Japan — the executive explained, “It’s a little bit out of fashion to do things at the worldwide level. It’s important to listen to the customer all over the world, to find out why something is performing well, or why something fails.”

Knowing each market’s individual quirks allows more variety in production. Mélard called it his version of “think locally, act locally,” and added that being part of a large conglomerate such as Kering helps, operationally, to drill down to the micro level. Principally, he observed, it is because Kering fosters an entrepreneurial spirit in all its brands, whether small or large.

Mélard also is working to ensure that the label stays consistent with its origins after the departure of Francesco Russo, who became creative director in October 2008 and left the post in February.

The executive credited Russo with elevating the line and increasing the desirability of its products across all markets, through designing such recognizable styles as the Cachet pump, the Mermaid jeweled ankle boot and the suede Chelsea boot, as well as defining the brand’s market niche and aesthetic.

“We use this brand platform now to go further and accelerate our development at worldwide levels, keeping these products as the foundation of the brand, while working to develop new shapes [around it],” Mélard explained.

Ruggeri, who will preview his new Sergio Rossi resort collection in New York this month, worked with both Russo and his predecessor, Edmundo Castillo.

Retailers are upbeat about the opportunity for Sergio Rossi, and they observed that the brand’s appeal lies in bold, sexy design.

Dayna Ziegler, VP and DMM of women’s shoes at Saks Fifth Avenue, agreed: “The customer responds to the glamour and feminine appeal of Sergio Rossi shoes.”