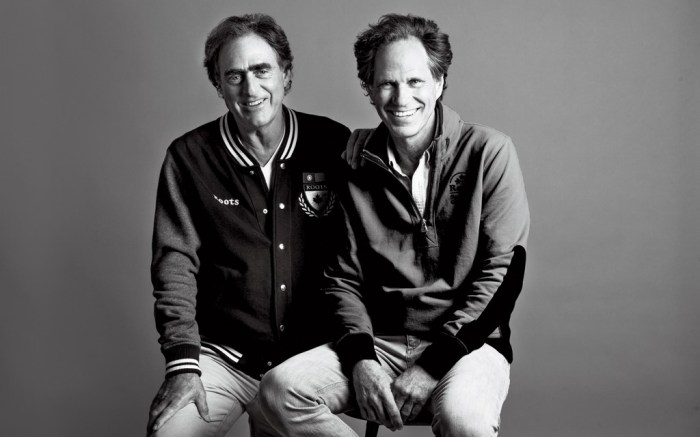 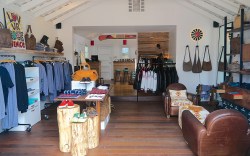 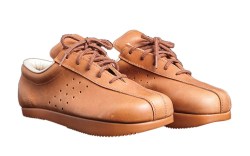 To mark its 40th anniversary, Roots brought back the shoe that started it all.

“Back in the day, the shoes resonated with people, and we had astronomical sales,” said Michael Budman, who founded the privately owned company in 1973 with longtime friend Don Green. “We’ve had renewed interest in the shoes, especially with the wellness trend coming back. Our anniversary is this month, [Aug. 15], so we thought, ‘Let’s reissue them — let’s give them a second life.’”

Budman and Green, who grew up in Detroit and share a passion for the Canadian outdoors, initially were inspired by the Earth brand, the originator of the negative-heel concept. The soles of Earth’s shoes were thinner at the heel than the toe, promoting better posture and reducing strain on the back.

The pair created their own take on the Earth shoe, featuring a milder incline in the sole and an athletic upper. They opened a store on Toronto’s Yonge Street, and within weeks, lines of customers stretched down the block, and hundreds of pairs were sold each day. “It was a crazy time,” Budman recalled, noting that the style was made until the 1980s, when it was relegated to the archives. Roots’ new generation of negative-heel shoes, available for men and women and priced at $158, have been updated with a lighter-weight sole and the brand’s signature, vintage-looking Tribe leather.

Over the years, Roots’ footwear offering evolved to also include leather boots, shoes, sandals and sneakers. “We understood that every good fad eventually comes to an end, but people loved our leathers and our craftsmanship. So we started making Roots shoes on conventional soles. It was a very positive step,” Budman said, adding that the label has become known for its boots, particularly the Tuff and Desert styles.

The company operates a 50,000-sq.-ft. factory in Toronto’s West End, where 200 skilled artisans handcraft bags, small leather goods and shoes — mostly simple constructions like chukka and roll-over boots, Budman said. “Consumers appreciate the idea of ‘made in Canada,’” he noted. “And people are tired of reading about factories with substandard facilities and workers making terrible wages. Our goal for the future is to produce as much as we can domestically.” For now, the company utilizes factories in India and Mexico to manufacture the remainder of its footwear line, using leathers sourced from tanneries in Italy and France.

Footwear, which is sold exclusively in Roots’ 210 retail stores and on its website, accounts for roughly 10 percent of the overall business. But Budman said the brand is looking to grow the category. The company will relaunch children’s shoes for spring ’14 and is exploring wholesale for its footwear. “There is a lot of interest, so we’re considering some options. It’s a matter of being set up to handle a higher production volume. If we wholesale, we’ll have to go into Asia.”

Retail expansion in the U.S. also is planned. In June, Roots opened its fifth U.S. store, on Abbott Kinney Boulevard in Venice, Calif. New York is the next target. “We’d like to open in Soho,” Budman said. Globally, Roots operates 106 stores in Canada, 80 in Taiwan and 19 in China.

Back home, Roots is garnering buzz and reaching new audiences through a partnership with Target, which moved into Canada for the first time in March and expects to have 124 stores in the country by year’s end. This past spring, Target featured an exclusive, limited-edition collection of apparel and accessories for adults and kids under the Roots Outfitters label. A second line, Beaver Canoe for Target, which includes both fashion and home items produced by Budman and Green’s company, will hit stores next month.

“After a successful [first] partnership with Roots, we are excited to see our relationship evolve,” said John Morioka, SVP of merchandising for Target Canada. “It’s a classic Canadian brand that so many Canadians know and love.”

To mark its 40-year milestone, Roots plans a series of special events and marketing initiatives, though details are being kept under wraps. Budman did reveal the release of a book in November that traces the colorful history of the label, whose products have been worn by the likes of former President Bill Clinton, Britain’s Prince Charles, Michael Jordan and Ben Affleck.

“It’s amazing to see how far Roots has come since that first pair of shoes, and that after 40 years, our brand still resonates so strongly with consumers,” Budman said. “Don and I just love Canada and the way of life here, and we’re proud to have created a brand that celebrates the uniqueness of this country.”