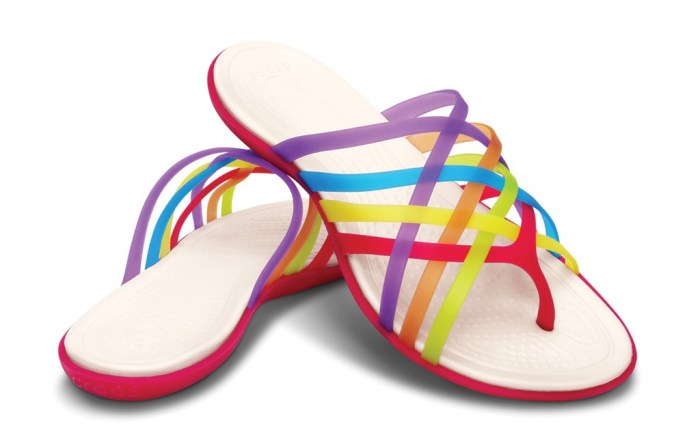 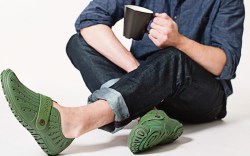 Today several emerging brands in the comfort and recovery worlds have chosen just one type of material as their signatures.

Brands such as Oofos, Telic and Barefooters have made proprietary shoe materials their calling cards (Oofos with closed-cell Oofoam; Telic with its single-molded elastopolymer and EVA blend; and Barefooters with the cork- and silicone-based CorksiLite). Even in a fashion climate that demands newness, all three say that, for the foreseeable future, they will continue to use nothing else in the making of their shoes.

For Boston-based Oofos, the lightweight foam used in its three-style line was created as an alternative to substances that focus on propulsion. “Instead of a material that actually propels, we wanted one that acted as a shock absorber between your anatomy and hard surfaces,” said Paul Brown, co-founder of Oofos. According to the brand, its foam absorbs more than 37 percent more impact than traditional EVA.

Boise, Idaho-based Telic, which will officially change its name from Terox on July 4, found that its elastopolymer blend, in conjunction with a cold-inject process used to create the brand’s molded sandals, was key to achieving the founders’ ultimate goal of producing entirely in the U.S. “We want to be part of restoring the American footwear industry infrastructure,” said Terry Stillman, one of Telic’s founders.

Alternatively, Toronto-based Barefooters launched in spring ’12 on the strength of the silicone-and-cork material that came out of medical research for prosthetic limb linings. Co-founder, president and co-CEO David Van Klaveren and his partners utilize two different kinds of anatomical footbeds — one for each style — to create flexible, washable shoes that Van Klaveren said re-creates a barefoot feeling while offering added protection.

While such technologies provide brands with a point of difference in a crowded marketplace, being so strongly identified with a single material can become an obstacle when it comes time to expand.

Mitch Kummetz, an analyst at Robert W. Baird & Co., said that Crocs faced this dilemma several years ago. “You have this iconic product with interesting material — [Croslite] — that lets you develop a lot of brand equity, but [on the other hand], you get pigeonholed as the ‘plastic clog company,’” he said. “Retailers, in particular, want to put you in a box, and there’s [the same] perception in the mind of the consumer.”

Dale Bathum, chief product officer for Niwot, Colo.-based Crocs, noted the company primarily manufactured shoes made of its closed-cell foam resin until 2007, when the firm began to experiment with combining canvas uppers with Croslite bottom units. Leather footwear was added the next year, and Crocs has since expanded the number of mixed-material styles. Today, Bathum estimated, roughly 30 percent of total SKUs are made exclusively of Croslite. And this spring, the brand launched a translucent TPU material in huarache and sandal styles.

The secret for Crocs, Bathum said, is maintaining Croslite in the footbed of every style.

“It’s so comfortable under the foot and it has such great properties, such as durability, resiliency and cushioning. I don’t see us not having it underfoot — it’s a constant,” he said.

The change has paid off, Kummetz said. While none of Crocs’ new products have replaced its iconic clog in the customer’s mind, the brand has seen success with some of the mixed-material styles. “To have stuck with [just Croslite] wouldn’t have gotten them to where they are today,” he said.

However, there are advantages to maintaining a strict adherence to your material of choice, namely brand recognition, said Michele Levy, U.S. CEO of Melissa, a division of São Paulo-based Grendene. “Our world is plastic. We would never, ever touch anything else. It’s really all that we do — it’s who we are,” she said, noting that Melissa has broadened its business by creating more-challenging shapes and configurations, and engaging in collaborations. And other product categories, such as handbags and accessories, are also possibilities.

While Brown at Oofos said any talk of future expansion is premature, Telic and Barefooters have considered their options.

At Telic, Stillman said color innovation and new silhouettes have provided enough growth as the brand approaches its one-year anniversary next month. But rather than conform to one material permanently, he said, the brand has prioritized its manufacturing mandate and comfort story. Going forward, Telic has the potential to do a stiched-on upper construction that would fulfill both commitments.

And Barefooters’ Van Klaveren said any future changes would need to align with the brand’s desire to be green in its production. “[Our tagline], ‘Feel great,’ is about more than just the actual walking experience. We have a very favorable eco story and always want to keep to that, so if we were to mix the materials, we’d need to maintain the vision we have in all ways.”