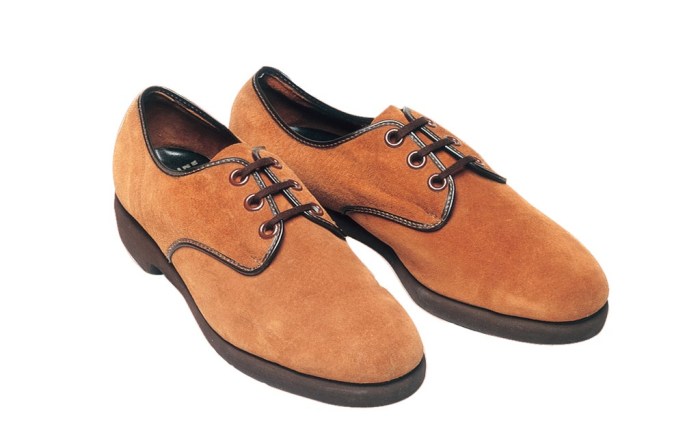 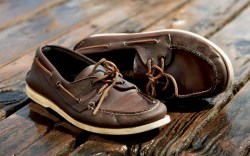 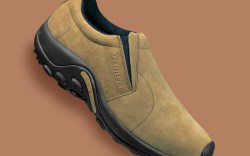 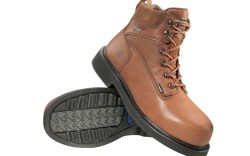 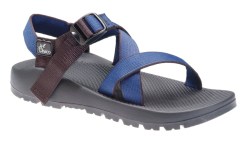 Innovation is the thread that binds the game changers at Wolverine World Wide. The Hush Puppies Classic, Sperry Top-Sider’s boat shoe, the Merrell Jungle Moc and Chaco’s Z sandal are iconic styles that not only redefined the footwear landscape but also launched categories, elevated their brands to new heights and captured consumers’ imaginations. And decades after their debuts, these key styles continue to thrive in the market.

1 Hush Puppies Classic
This shoe may have once saved the life of Rolling Stones guitarist Keith Richards. “As the story goes, the shoe’s EVA outsole helped ground him and [prevented] him from being electrocuted [when some concert equipment went awry on stage in 1985],” recounted Mark Neal, president of Wolverine’s Lifestyle Group, which encompasses the brand. But more important, he added, the Hush Puppies Classic introduced Americans to the idea of dressed-down shoes that could be stylish. “If you go back to 1958, when the Hush Puppies brand was created, this style was unique and different. It was also colorful, which at the time was kind of revolutionary and fun,” Neal said, noting that the whimsical Basset Hound logo (a play on the idea that the comfortable shoes could soothe anyone’s “barking dogs”) helped make it a hit. The Hush Puppies Classic, which enjoyed a resurgence in the 1990s, remains a shoe wardrobe staple today.

2 Sperry Top-Sider Boat Shoe
Sailor Paul Sperry was looking for a non-slip shoe for his seafaring adventures in 1935 when his dog, Prince, offered up his paw. Today, that shoe — with an outsole inspired by the naturally skid-free texture of canine foot pads — is prized by ocean-lovers and city slickers alike. “It’s a magical story,” said Sperry Top-Sider President Craig Reingold. “That’s what great brands are built on. [The boat shoe] is authentic, and we believe it represents the lifestyle that [Sperry Top-Sider] portrays: a passion for the good life in, on and around the sea. We have a broad consumer base, but they are all buying into a slice of that lifestyle.”

3 Merrell Jungle Moc
It’s the shoe that essentially created the after-sport category, but by Merrell’s own admission, it might have been an accidental hit. The Jungle Moc was born after the Jungle Runner athletic style purportedly flopped at retail. Jim Zwiers, Wolverine’s SVP and president of the Performance Group, explained, “We had outsoles [left over from the Jungle Runner] that we needed to amortize and we had a pigskin tannery that produced some of the most innovative product in the world. The team made the best of what they had. There was an opportunity in the marketplace [for a product] that would play in the gray areas between categories, and the concept really exploded.” With more than 15 million pairs shipped since its 1998 debut, the Jungle Moc remains one of Merrell’s biggest successes today. Zwiers added, “We see it as not only a continuing product but a growing product.”

4 Wolverine DuraShocks
When Wolverine took Hush Puppies’ comfort technology and injected it into a workboot with a softer leather upper, the category — and the label — got an instant upgrade. “When [the DuraShocks] hit retail in 1992, it just took off,” said Ted Gedra, president of Wolverine’s Heritage Group, which includes the Wolverine brand. “Work [had been] behind the curve, with stiff board-like leathers instead of supple leathers, so we said, ‘Let’s change that.’” A spot-on ad campaign and instructional videos further boosted the boot’s allure, not to mention the company’s profits. “The technology story and innovation that those brought commanded a higher price point, and we automatically became a premium player [in the workboot category],” said Gedra. “It elevated the brand’s image perception and value proposition.” Fast-forward 21 years, and DuraShocks remains at the core of Wolverine’s work product offering.

5 Chaco Z Sandal
To say that the water sandal with the crisscross straps and comfort-focused footbed has a cult following is understating its star appeal. Launched in 1989, the Chaco Z Sandal even has a tan line named after it, as well as a customer-created Facebook page where fans share pictures of the Z-shaped tan lines on their feet. According to Zwiers, it all started when fly-fisherman and white-water rafter Mark Paigen invented the first Chaco as an alternative to the flip-flops and cut-up sneakers that he and others had been wearing for those activities. “This innovation came from just an intense focus on solving a problem,” said Zwiers, adding that the style got another boost in 1994 with enhanced comfort features. Add to that a savvy customer service plan to repair and replace every pair ever sold, and you have an enduring classic.