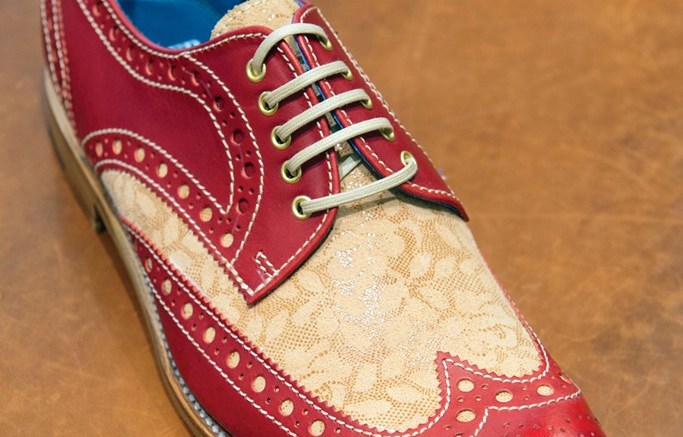 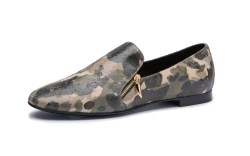 In fact, many said this season vendors presented a particularly creative and innovative range of products.

“The brands are playing with styles, putting color on the soles of otherwise formal shoes to give them an attitude,” said Tancrède de Lalun, GMM at Printemps.

Eric Jennings, men’s fashion director at Saks Fifth Avenue, noted several new trends emerged at the show that will dominate the spring ’14 season. “The new model for the season is the slip-on — think variations on the classic Vans,” he said, citing “woven suede and raffia” as the latest hot combo in footwear. “Embellished sneakers and slipper shoes also continue gaining in importance.”

Tom Kalenderian, EVP and GMM at Barneys New York, also told Footwear News he gained insight into future trends at the show. “Espadrilles are really hitting the pavement this season,” he said.

Below are some highlights from the event:

Brunello Cucinelli
In keeping with the main inspiration for his brand’s spring collection, Cucinelli injected strong references to the British Teddy Boy subculture into his formal footwear range, which included luxury Goodyear-welted shoes in cordovan leather and honeycomb calf. For a casual yet elegant look, the designer also introduced a lightweight deconstructed style in antelope suede, along with a new breathable car loafer decorated with fringe.

Moreschi
The high-end Italian label made an entrance into the sport arena for the first time, launching a range of leather, laser-cut sneakers that were available both in a low- and high-top version. The brand also expanded its casual offering, which now includes the Alcazar, a printed velvet slipper with Moorish architecture-inspired motifs.

Barker
The British label hit the show with a new take on formal footwear, playing with colors and mix and matching different materials. Standout looks included an oxford shoe combining colorful leather with printed nubuck suede in a floral pattern, along with a style in crinkled white leather.

Cesare Paciotti
The brand, which is focused on the United Arab Emirates, embraced a rock ’n’ roll approach for summer, designing suede and leather slippers embellished with gothic metal elements. Paciotti also reworked his signature 308 Madison style, which this season came in a Mondrian-inspired geometric pattern on patent leather and in a soft calf version. On the more sporty side, the Paciotti 4US line included a suede derby shoe featuring a rubber strap taken from divers’ masks.

Pirelli’s Pzero
For spring, the brand looked to its past with the launch of the New Volley, a technical nylon and suede sneaker inspired by a design from the “Pirelli per lo sport” line in 1982. The shoe — available in a range of vivid colors, including yellow, orange, blue and green — features the 1960s-era logo created for Pirelli by graphic designer Bob Noorda. The same logo also appears on the new leather and nylon Rubber Heritage sneaker, outfitted with a lightweight, flexible sole.

Castañer
The Spanish label showed off the fruits of its collaboration with a New-York based graphic artist, who embellished the brand’s iconic espadrilles with drawings of the Mediterranean Sea resorts where Castañer has stores, in Saint Tropez, France, as well as Llafranc and Cadaqués in Spain. In addition, the brand introduced cotton espadrilles in a multicolor paisley pattern.

Y.O.U.
The Italian footwear brand teamed up with Vibram for spring to create the exclusive Avenue cup-sole shoe. Injecting a new twist on men’s footwear, Y.O.U. played with hybrids, merging a boat shoe with a sneaker; mixing suede and gingham cotton; and combining slip-on styles with an espadrille in a paisley motif.