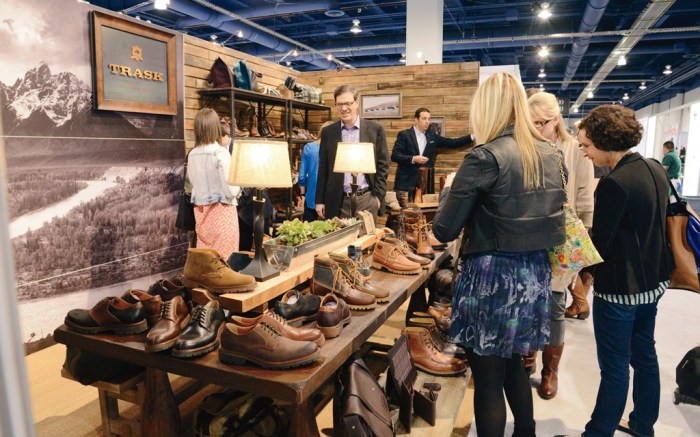 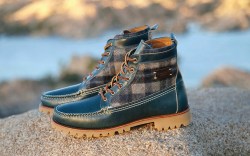 The outdoor-inspired heritage brand, which was acquired by Genesco Inc. in 2011, returns to the market this fall with a fresh approach. “Trask is a brand we appreciated not just as footwear marketers but as consumers,” said Jon Caplan, CEO of Genesco’s Branded Group. “We consider this an opportunity to do something special — to rebuild a brand that will stand out.”

Trask was first introduced in 1993 by Harrison Trask, a longtime footwear executive with a passion for the outdoors. Inspired by the American bison roaming the land in his hometown of Bozeman, Mont., Trask developed a men’s footwear collection using unusual materials. “He discovered that bison leather has some amazing properties: It’s very soft and supple but quite strong and durable at the same time,” Caplan said. The brand grew quickly, garnering a fiercely loyal consumer following. Eventually, Trask, who was looking to step away, sold the business to Phoenix Footwear Group Inc. in 2003.

Now under the Genesco umbrella, Trask, which has been absent from store shelves for several years, is being reinvented with new product and a more contemporary point of view. “We looked at the DNA of the brand, which is inspired by the open skies of the West and interesting, exotic materials. We knew we wanted to hold onto that,” Caplan explained. “But at the same time, it’s been 20 years since Harrison introduced the brand, so we saw an opportunity to take a more modern-day approach and elevate the product to another level.”

Because materials are intrinsic to the Trask story, the brand began by tapping Genesco’s vast supply network to source steer, elk, wild African ram, shrunken lambskin, Italian wool and double-faced sheepskin. Trask also turned to Chicago’s Horween Leather Co. to develop a Chromexcel bison leather. “It’s an incredible material, with a great patina and pull-up quality,” Caplan said. “Our goal is to create shoes that get better with time, that have almost an heirloom quality.”

The inaugural fall collection, which delivers to stores in September, features rugged-yet-refined styles such as boots, saddles and twin-gore chukkas, priced from $195 to $265. The offering also includes updated versions of the Gallatin, the classic bison leather oxford that first launched Trask. Moving into spring, the line will transition to lighter, more relaxed looks, such as hand-sewn moccasins, loafers and barefoot-like constructions. In addition, Trask is introducing a higher-end, limited-edition men’s collection, called Reserve, with welted boots made exclusively in the U.S. Priced up to $495, the boots are manufactured at the Rancourt factory in Lewiston, Maine, and at Genesco’s own Nashville facility.

Although Trask is rooted in the men’s market, Genesco is relaunching the brand with a full women’s offering. “When you look at luxury casual brands out there, almost all of them are dual gender. We felt that to build a true lifestyle brand, Trask needed to be for both men and women,” Caplan explained. The women’s assortment for fall consists of ballet flats, slippers and boots in a range of heights, followed by sandals and opened-up flats for spring. Price points range from $168 to $378. Trask also will offer a selection of accessories for men and women, including bags, belts, wallets and other small leather goods.

According to Caplan, the brand’s retail distribution will be wide-reaching, from outdoor lifestyle shops and specialty clothing retailers to high-end shoe boutiques.

Sun Valley, Idaho-based Silver Creek Outfitters, among the first retailers to stock Trask when it launched in the 1990s, has picked up the newly revamped line for fall. Owner Terry Ring said Genesco has stayed true to Trask’s heritage. “The styling, materials and colors of the new collection are as good as anything I’ve seen [of the brand]. I like what they’ve done in terms of updating the line with Horween leathers and keeping it relevant,” he said. “The shoes have a rugged elegance that fits the Sun Valley lifestyle. We’re excited to see the brand come back.”

Peter Hanig, owner of Chicago-based Hanig’s Footwear — also an original Trask retailer — said he believes the stronger fashion focus of the new line will help attract a wider audience of customers. “Genesco understands the fashion component of this niche better than the original company under Harrison,” Hanig said. “Trask has always had great product, but Genesco has elevated the styling and visual appeal of the line.”

To build buzz for the relaunch, Trask plans to enlist a fleet of brand ambassadors, such as celebrity chefs and adventure-travel guides. Marketing efforts also will include social media, in-store events and local promotions. “With the nature of this brand, we don’t want to do a big, mass-media approach. We want to treat it almost like an insider story,” Caplan said.

Already, word of Trask’s return is spreading among its original fan base. Despite Genesco making little fanfare of the acquisition, intrepid consumers have tracked down the brand. “Not a week has gone by where we haven’t received some consumer and even trade inquiries,” Caplan said. “Trask is one of those brands people just loved. It was very unique and special, so we are excited to bring it back and make it better than ever.”