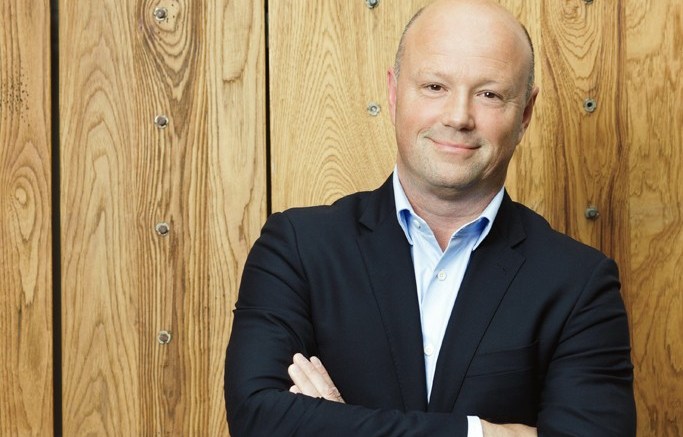 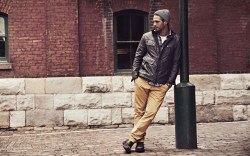 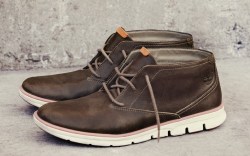 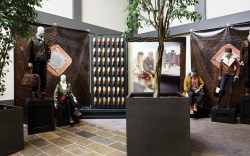 Custom-made for Timberland’s president, one says, “Simplicate.” The second one hangs behind his desk and faces anyone who comes for a visit. It states, “If you don’t grow you die.”

Simplicate, a word Frisk takes credit for coining, means stripping everything down to its most essential state. And the other?

“People look at that the first time [they come into my office], and they go, ‘Holy Christ, this guy’s all about financial growth — am I gonna get fired if I don’t grow?’ And usually I put people in that [chair] so they see that all the time,” the executive joked.

But he’s not kidding about taking those words seriously. “‘If you don’t grow you die’ is about the fact that I realized early in my career that if you don’t have growth your business, cost creep is going to catch up with you, and you will just simply not be able to survive as a brand, as a company,” he said. “But even more importantly, ‘If you don’t grow you die’ is the message I keep talking about internally with our people. It’s about growth in our people. It’s that continuous pursuit and challenge of increasing the knowledge that you need to know what you don’t know.”

Frisk was previously president of outdoor and action-sports for Europe, the Middle East and Africa at VF Corp. Tapped by the Greensboro, N.C.-based firm to run Timberland after VF’s $2.3 billion acquisition of the brand in September 2011, Frisk has spent the past two years making his mark.

The executive also incorporated VF’s robust, long-lead product creation and go-to-market strategies. The company cut SKUs dramatically — for instance, 70 percent of the women’s spring ’13 line was axed — to eliminate one-off items and create families of products. Frisk is looking to capitalize on a cleaned-up, more-segmented distribution that will leverage what he terms an enormous opportunity in the family and value channels.

All the new initiatives come as Timberland moves away from peak-performance outdoor product to embrace a features-driven, lifestyle-oriented line that prioritizes style. In fact, the company has a new directive: SPG, which stands for style, performance and green, now represents the order of the company’s goals.

VF is banking on big potential for the brand. It plans for Timberland to expand 50 percent by 2017, to $2.3 billion, from the current $1.5 billion. Steve Rendle, VP of VF and group president of its outdoor and action-sports Americas division, has called the brand “the next big growth story” based on the company’s high-single-digit growth rate for the year.

Daniel Tea, VP and DMM for St. Louis-based Famous Footwear, a division of Brown Shoe Co., said Timberland’s new focus on the family segment is already paying off in his stores.

“From the beginning, Patrik and his team have been strong proponents of our channel of business, [and] they quickly and proactively aligned product and sales to support growth goals,” he said.

Baird & Co. analyst Mitch Kummetz noted the brand’s shift toward lifestyle product could be a good move. “They recognize that everybody in the outdoor industry is moving into technical and abandoning the casual lifestyle piece, but that side is more natural to Timberland anyway,” he said. “For me, that makes sense.”

Here, Frisk sounds off on frank talk and international opportunities.

Is Timberland different today than when it was acquired?
PF: Before, this was a product-based company. Today, it’s a strategic company based on consumer insights. It’s a different cadence, and how we start the entire process is different: We know what consumer shops in which channel, and we’re building product for that consumer. We’re also realigning our product categories to complement how the market sees them — before, we had [segments] that were internal, so we were talking to ourselves. We’re not doing that anymore. At the end of the day, we [kept] everything that was good about Timberland in terms of making sure we kept the entire social responsibility initiative, in terms of our path to service and our engagement with stakeholders in the industry. We’ve made a decision to define our values better, but the values remain the same.

How does being so focused on growth sit with the industry?
PF: Sometimes, in the outdoor industry, [growth] is almost a dirty word, right? If you’re small, you’re a specialty guy. And absolutely, we need the specialty guys because they bring innovation, they bring new ways of thought to market. But ultimately, I run big companies. And if we don’t grow, somebody else will, and our business will wither. I am here to provide for the people who work here and the corporation. That’s what it’s all about. I wake up in the morning and I think about growth. I go to bed at night, I think about growth. It’s just the way I am.

How did you communicate that to your team?
PF: Every leader has their leadership style, and mine is very straightforward, very pragmatic. I decided early to have an honest conversation with the people here. We’ve got our quarterly Town Hall meetings where we talk about the difficult things and not try to hide them. We have taken the pixie dust out of the conversation. And perhaps in the past, there was more pixie dust than today, with seeing things a little rosier than they actually were. I needed everybody to understand the things we needed to get done to get [the company] back to health and start growing again.

Do you credit the streamlining for that growth?
PF: It’s a complicated world out there, and the more you can do to simplicate things, the higher the likelihood of success.

How is that changing the firm’s outlook?
PF: The previous vision of the company was to be the No. 1 outdoor brand in 2013. I believe in visions that don’t necessarily have a time attached to them, and I want them to be more aspirational. And was it really true that we just wanted to be an outdoor brand? Is that how the end consumer saw us? So when I put the new global management team together in January 2012, where we landed was to be the largest and most sustainable outdoor lifestyle brand on earth.

Switching the focus to lifestyle is a big change for Timberland. What motivated you?
PF: A lot of people hike in our stuff, and we sell a lot of hiking footwear, but it’s not the majority of what we sell. The biggest part of our business today is in the lifestyle area. That’s how consumers, if you go around the globe, see us. So for us, adding the word ‘lifestyle’ also meant that we started to accept who we have become. It’s potentially where our biggest opportunity lies.

You said you want to put style first when creating product. Do you worry that will overshadow your performance and sustainability elements?
PF: On the shoe floor, if you don’t have style, you’re not going to be considered. Looking at the [line using our SPG priorities] doesn’t mean we’re not going to talk about performance. People know us for performance. Green, we look at what we do compared with our competitors and we’re the strongest. We’re going to continue to talk about green and we’re going to continue to bring innovation like [the comfort-focused spring ’14 outsole technology] SensorFlex to the market. But the style component for us is going to be the differentiator going forward.

How, specifically, do you balance the new style focus with the brand’s outdoor heritage?
PF: There is a true head-to-toe design ethos for the brand where that rugged-to-refined aspect of our style comes into play. That’s where the sexiness of the brand comes into play, when you can mix the rugged and refined. Too much rugged and it becomes flat. Too much refined and you become too dressy or too unbelievable. When you are able to mix them as we can, that’s when magic happens.

You said the family channel could be a big opportunity, even though some brands shy away from it. Do you see any downsides to being in the value side of the business?
PF: It depends on what kind of brand you are. If you’ve got an awareness of 83 percent [as internal surveys show Timberland does] and you’re selling footwear in North America, if you want to decide not to be in those kind of channels, then you might as well decide not to be in business. Because ultimately, that’s where America shops.

What retailers will be key to your efforts?
PF: You go into DSW, that’s the happening channel. I believe in what Famous Footwear is doing right now and how they’re looking at their business. They’ve got sound strategies; they know what they’re doing. We’re a footwear company first and foremost, so we need to show up where our customers are and we’re going to do a better job there. But we’re also going to do a better job for Nordstrom and for the independent channel.

How will VF’s sourcing capabilities be an advantage for Timberland?
PF: I don’t think China is going to be as important as it was. People are going to look at what happens on this side of the world if you’re distributing to this side of the world. I’m grateful that we’re part of VF because we’re able to do this with more professionalism and more power than most other people, but it’s still going to be a challenge for us.

Do you forsee a return to domestic manufacturing for Timberland?
PF: We’re investing heavily in Timberland Boot Co., and we’re bringing the majority of its men’s production back to the U.S. [from China]. We’ll be making the line in the southern U.S. But we’re also looking at what we can do to bring the sample-making part of that into this building again within a year.

Europe has been challenging for many brands, including Timberland. Where do you see global opportunities?
PF: The game in the mature marketplaces of Europe and North America is going to be about market share. We have opportunities to grow in South America and in our distributor markets in the Middle East, but we also have a big opportunity to grow in northern Europe. We’re very strong in southern Europe. Of course, [with the economic sluggishness there], that’s difficult for us. And in Asia, one of the big opportunities is China. I mean, people are saying China is slowing down, but we are very small in China today. There’s an enormous opportunity for us to grow there over the next five to 10 years.