From the Archives: SJP and George Malkemus on FN’s Cover in 2013 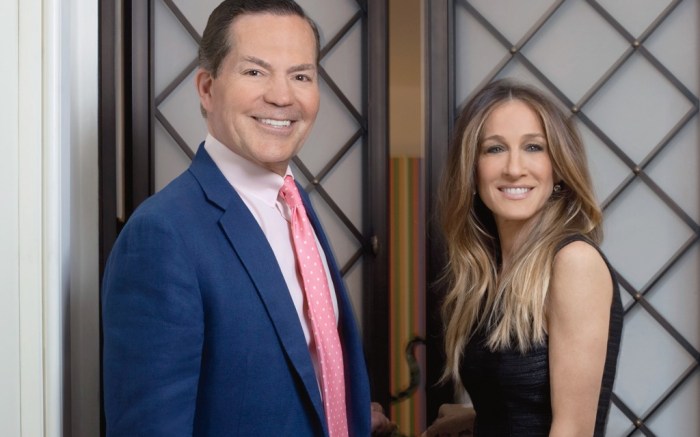 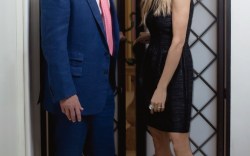 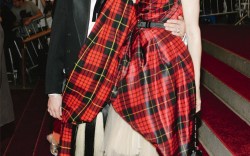 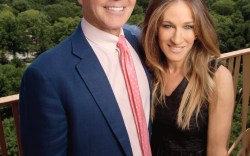 Editor’s Note: FN is taking a look back at George Malkemus’ life and storied career following the beloved executive’s death. This story appeared in 2013, when he and Sarah Jessica Parker announced their new footwear venture in an FN cover story.

Sarah Jessica Parker’s excitement was palpable as she elegantly glided through George Malkemus’ immaculate Upper West Side apartment on Wednesday.

While she admired her new business partner’s extensive art collection, the actress and style icon discussed how excited she was to break her silence about the top-secret plan she and Malkemus had been hatching since her birthday on March 25.

The pair was finally ready to tell the world their big news — that they are launching the SJP fashion label for spring ’14 as part of an exclusive deal with Nordstrom. (Meanwhile, Malkemus will continue in his role as president of Manolo Blahnik USA and together with his partner, Tony Yurgaitis, will run the two businesses separately.)

The inaugural collection, which includes footwear, handbags and trench coats, will undoubtedly be one of the most anticipated fashion debuts of 2014 — but Parker isn’t ready to talk in those terms quite yet.

She’s humble, even a little superstitious, about her new venture. “I really hope people like it. We’ll see,” said the actress, who has been an ardent observer of the fashion world since she first moved to New York in the mid-1970s. “I love to learn and I’m forever curious. I love to be around people who have great taste and great life experiences.”

It should come as no surprise then that the actress soaked up every bit of fashion knowledge she could while playing Carrie Bradshaw, the fashion-obsessed star of “Sex & the City.”

“You can’t imagine the things we saw, the designers I was around. It was like having an entire education presented to you,” said Parker, 48. “I tried on every single thing I could, even if it was ridiculous and laughable. I never got tired of it.”

That willingness to take risks — on- and off-set — is the primary reason Parker and her co-stars are often credited with revolutionizing the shoe business, turning labels such as Blahnik, Christian Louboutin and Jimmy Choo into household names.

Since the show, the shoe market has gotten hotter, the competition fiercer. So why did Parker decide to jump into the footwear fray now?

“There were many years where opportunities existed and it just didn’t go any further than that because I didn’t feel equipped or ready, the timing wasn’t right. In the more recent past, the conversation erupted again and I took it more seriously,” she said.

But Parker continued to wrestle with the decision — something was holding her back.

“I met with lots of interesting and kind and lovely potential partners, but at night when I was lying in my bed thinking about this opportunity and what it meant to me, those partnerships didn’t seem right for me. I realized the one person I’d want to work with, in an ideal world, was George. … But I was hesitant because I knew how obligated he was,” she admitted. “I didn’t think of him as a massive shoe producer. He doesn’t run a business like a lot of other men and women in the shoe industry.”

But friends convinced her to reach out, and when she did, “I jumped through the phone line,” Malkemus quipped. The next day, the two met in person and found they shared a strikingly similar vision for the partnership. “This is the relationship I wanted to be in. The way he wants to function and operate this business is everything that’s important to me,” said Parker.

It all starts with Italian manufacturing, according to Malkemus. “That’s the first thing we talked about,” he said. While producing high-quality shoes was No. 1 on the agenda, it was equally critical to find a production partner to make the shoes at an accessible price point.

The sweet spot they arrived on was the low $200s to the mid-$300s for most styles. (Final prices will be determined over the next few months.)

“Still, we know the hard-working woman who spends $300 is going to want that shoe to last. She wants it to be something she can wear to work and then to go have a drink with her beau,” said Malkemus.

Parker’s criteria is a bit more personal. “I have to know that we’re producing shoes I’m going to wear. I’m not going to try and sell someone shoes that aren’t going to be good enough for me to wear myself. I want to produce something that I’m excited to order myself.”

Clearly, she knows what she wants — and doesn’t want — to put out in the market, and that’s extremely important to Malkemus.“It’s really refreshing to have partners who have points of view that they stick to,” he said. “We share a lot of that in our sensibility. You might not like it, you might not buy it, but it’s what Sarah Jessica wants to show you.”

So what, exactly, does Parker want people to see? While the samples remain locked away and the final styles won’t be ready for months, the duo was happy to give a sneak peek into what the collection, which consists of 35 to 40 styles, will entail.

For starters, she’s offering a variety of heel heights, save for kitten heels. “I don’t like the way they look on me,” Parker admitted. And don’t look for sky-high platforms either. “But I want high heels!” she exclaimed, before addressing comments she made to a magazine earlier this year that were quickly taken out of context. (Some media outlets suggested Parker was permanently trading in her heels for more comfort-friendly flats after damaging her feet.)

“It’s not the heel, it’s what I asked myself to do in the shoe for so many years,” she explained. “The average woman does not run on concrete in heels to film a TV or movie scene for 12 to 15 hours a day. … But I feel like I need to make a public proclamation: I will never give up heels!

“I have received more medical shoes since that piece. I’ve been sent every healthy shoe from across the globe,” she joked. “People have sent me bandages for podiatry issues. I have received letters of counsel and advice.”

That being said, Parker is obsessed with making her shoes comfortable, and that’s part of why she plans to stay away from super-high heels. “When it gets really, really high and your achilles is shoved back into your calf as far as it can go, that’s when I see that ‘shuffle’ happen in women,” Parker said. “Part of me feels responsible for it because [those heels] were a big part of our storytelling on the show. But people allowing themselves to be in pain — ugh.”

On a more upbeat note, Parker is energized about the diverse array of colors that have burst onto the footwear scene. “This idea that black and brown are the only neutrals is done, and that’s so liberating for the shoe business,” she said. She plans to incorporate interesting, unexpected color combinations into the line — mocha with navy, for example.

With the design aesthetic well thought-out, the next piece of the equation for Parker and Malkemus was finding the right retail partner. Enter Nordstrom. “[I’m so amazed] at how educated their salespeople are. They are full of pride. It’s so nice when someone is that invested and cares that much — that kind of partnership is so rare these days,” Parker said.

And she’s already looking forward to learning the ins and outs of the retail business from her new partner.

“They’re mentoring us in a way because they know the space and the customer and what sells,” she said. “If we’re entrenched in an idea or a philosophy and something’s not selling, we’ll have to go back and talk about that. We’re not going to be fools. We want to have a successful business.”

By all accounts, Nordstrom is bullish on its newest star footwear player. (They have not yet seen the handbag and trench coat collections, and have not committed to those buys.)

“Based on her obvious connection to footwear — as a fashion icon and through her leading role with “Sex & the City” — it seems like a natural progression that she is now turning her hand to design,” said Scott Meden, EVP and GMM of shoes for the retailer. “Sarah Jessica is above all authentic, and her taste is impeccable. Her aesthetic and approach to fashion are an inspiration to so many women.”

For his part, Malkemus wants to make sure he grows the business steadily. He’s not interested in following trends or having an overnight sensation.

And Parker is itching to hit the road to promote the line at Nordstrom stores. In fact, that’s one of the first things she inquired about.

“I wouldn’t do it any other way,” she said. “Just look at Laura Mercier [cosmetics]. Laura worked those customer relationships and told her story over and over again. That’s a great example of how to get down and dirty in the trenches. I told George I want to go on a whistle-stop tour, to the obvious doors and the non-obvious ones. We know Los Angeles, Miami and New York are important markets, but what about the smaller doors where people are enthusiastic. They deserve the opportunity, too.”

She’s clearly eager to get valuable feedback from her consumers, but is she ready for the cutthroat criticism of the fashion world? “I’ve never let other people’s opinions affect my choices too much,” Parker said. “There are lots of people who’ve been in business for a long time who’ve done it really well. I’ve loved wearing everyone’s shoes.

“But no, I never read people’s opinions. What role could it possibly play in how invested we already are? I don’t think anyone else’s opinion matters. But we are going to be as enthusiastic as we can be and work with the greatest people we can,” she added.

And Malkemus envisions creating a timeless collection. “I would just be happy to see the same girl who bought an original SJP pump come back in three or five years and still have the first shoe.”