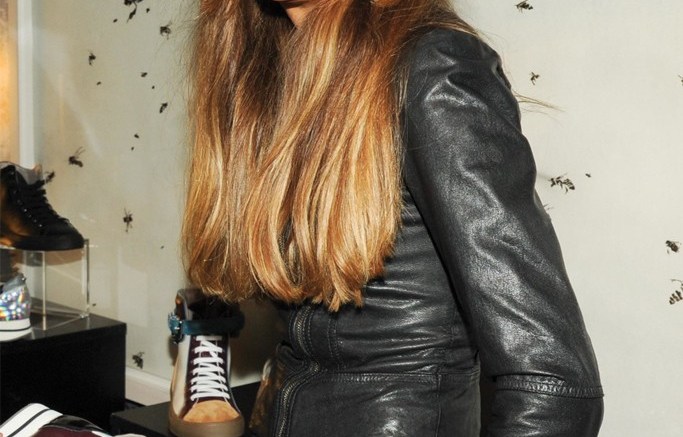 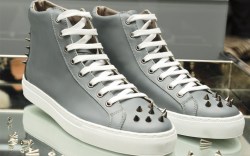 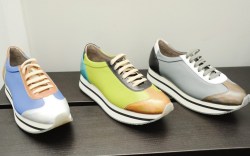 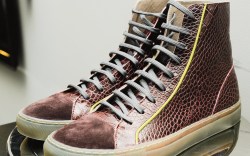 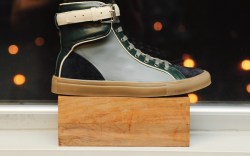 Ruthie Davis is bringing her unique blend of sporty fashion to men’s sneakers.

The designer will debut for fall ’13 a line of seven styles: two joggers, four high-tops and a loafer. The shoes, which retail for $648 to $848, are all made in Italy of calfskin, suede and patent.

The color palette is dark — gray, navy and forest green figure prominently, with a few unexpected bright pops as well as studding and spiking. Rubber outsoles and EVA add a little comfort.

“I’ve always loved an athletic shoe,” said Davis, “so it was kind of a natural progression after I launched women’s sneakers [last year] that eventually I would evolve into men’s.”

In fact, she added, the women’s sneakers sparked requests to move into the new category. “In the past, the girls wanted the boys’ sneakers,” she said. “And it was kind of neat that now the boy wants the girls’ sneakers.”

Still, Davis may not grow the men’s line beyond its current focus.

“I’m not really feeling a men’s dress shoe, like a brown leather shoe,” Davis said. “I’m going to stick to this more casual [idea]. This is the guy I want to hang out with. I don’t hang out with Wall Street guys.”

She does, however, see kids’ shoes on the horizon, noting that miniature versions of her sneakers for girls and boys could be next.

For now, though, Davis said she’s not worried about the recent influx of newcomers in the men’s category, explaining that she brings a woman’s touch. “No one better than a woman can make her man look hot, and that’s a nice twist,” she said. “These are lucky boys, because I love men and I’m going to make them look hot.”

The Designer
Ruthie Davis worked at Reebok, Ugg Australia and Tommy Hilfiger before launching her own footwear collection in 2006.

The Buzz
The men’s line has already been picked up by Scoop, Barneys Japan, Harvey Nichols Kuwait, Level Shoe District in Dubai and Italy’s Antonioli and Luisa Via Roma.