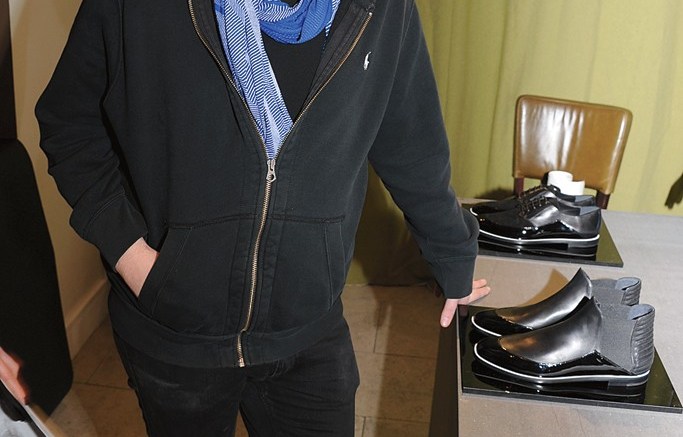 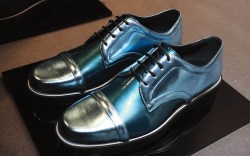 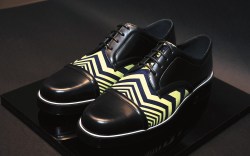 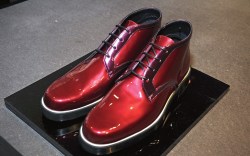 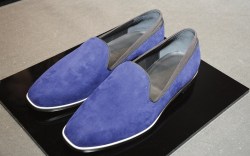 Already a favorite on the red carpet and worn by the likes of Sarah Jessica Parker, Sienna Miller and Michelle Williams, Nicholas Kirkwood is seeking a new customer: men.

This month, he debuted his men’s collection for fall ’13 with six silhouettes ranging from classic to sporty, with an oxford, a smoking slipper, a lace-up boot and a sneaker hybrid priced between $520 and $950. Soles come in two thicknesses, with the thinner versions made of classic leather and the thicker variety of wrapped leather. All have been crafted in Italy near Florence.

While the shapes are simple, the materials and finishes make a statement with grosgrain, metalicized patent, laminate leather and calfskin.

Aiming for a post-punk aesthetic, the designer said he also wanted the line to be accessible. “It’s the fabrication that creates the spirit of the collection,” Kirkwood said. “I could try to reinvent the wheel, but then no one’s going to wear them.”

For the new looks, the designer employed techniques he developed for the women’s line, such as foiled suede in a zigzag pattern. “It’s about trying to take some of the language and the approach I have to women’s design and interpret it in a masculine way,” Kirkwood said.

Likewise, he reproduced microdot nail heads as detailing, arranging them in an arrow formation — “a modern interpretation of a wingtip,” explained Kirkwood’s business partner, Christopher Suarez.

Interestingly, before he started in women’s footwear, Kirkwood handmade men’s shoes for himself. “I could make them at home, whereas I couldn’t make the women’s as you need special machinery to put on heels and things,” he said, adding that the styles were a little different back then. “It was 2000, so they were very long and pointy.”

Next in the pipeline? “I’ll probably start doing some of the men’s shows next season,” Kirkwood revealed.

The Buzz
Kirkwood debuted the collection first in London, then in Paris, earlier this month. The shoes will be available in the designer’s namesake boutiques in July.

The Designer
The Central St. Martins and Cordwainers graduate launched his eponymous women’s footwear line in 2005 and has also created runway shoes for designers including Rodarte, Erdem and Prabal Gurung. He opened his first store on London’s Mount Street in 2011, and last year debuted a New York boutique on Washington Street.

The Inspiration
Known for his architectural women’s footwear, Kirkwood gave his men’s line a “late 1970s, early ’80s post-punk” vibe, with an emphasis on classic lines set apart by fabrication and subtle details. The Kills guitarist Jamie Hince is his target customer.