Fashion Brands Get Comfortable for Spring ’14 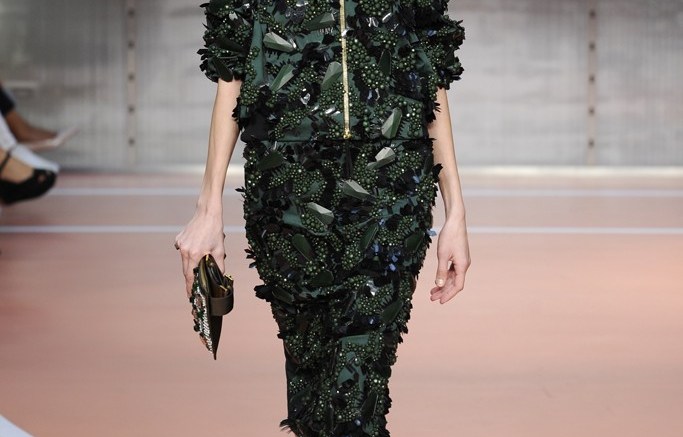 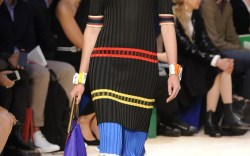 For spring ’14, the comfort footbed has shed its crunchy past and emerged as the key sandal style. In the process, new, hip retailers have been scooping up traditional brands, from Birkenstock to Teva, while runway labels have clamored to get their designer versions to market.

“The resurgence started with Phoebe Philo at Céline,” said Kirna Zabête co-founder Beth Buccini, herself clad in a pair of the designer’s mink-lined “Furkenstocks.” (She was one of the few retailers to buy into the style for spring ’13.) “We sold every single pair and wished we bought more — even the ones with red fur.”

Buccini said she anticipates Céline’s updated snakeskin and patent versions for spring ’14 will ring up strong sales as well. “We feel it’s going to continue. I’ve started to see them everywhere now,” she said, listing similar styles from Givenchy, Giambatista Valli and Chloé as proof.

For the generation discovering footbed sandals for the first time, these chunky iterations are an about-face from the punishing heels that have dominated fashion for years.

“We’re going to have a lot of Birkenstock-inspired styles in the store because everyone wants comfort shoes right now,” Buccini said. “Never before on the runway did I see so many flats.”

For style blogger Preston Davis of Keep It Chic, it’s not just the catwalk that has made comfort look and feel right, but a certain type of girl.

“Alexa Chung and Tabitha Simmons made flats chic again. For the modern woman, the shoes are perfect for running around,” Davis said.

Much like Ugg Australia in the early 2000s, contoured footbed sandals are benefiting from a change in perception, from eyesore to appealing.

And according to David Kahan, CEO of Birkenstock USA, it’s about time. “We’re very appreciative of the fact that fashionable people are now waking up to what we’ve known all along, that Birkenstocks feel great on your feet,” he said. “We started to read on all the fashion blogs about this ‘ugly shoe’ trend when the early adopters bought them. Then the second wave said, ‘They’re kind of ugly, but maybe it’s in style,’ and they bought it. Then all of a sudden, everybody is like, ‘They’re so cute,” and it’s the same shoe that a year ago people would have said, ‘I wouldn’t be caught dead in it.’”

With new A-list accounts including Net-a-porter.com and sales momentum for reissued styles such as the Gizeh multistrap and Boston clog, Birkenstock— which won FN’s Brand of the Year award earlier this month — is riding high.

But despite its success in the fashion market, the company is determined not to stray from its aesthetic roots. “We’re not changing our DNA or our models, but we are taking style cues to make sure we coordinate well,” Kahan said.

The brand this year appointed Rudy Haslbeck as its first design and product manager. (He will work from the Germany headquarters.) In the U.S., Shelly Glasgow has been promoted to head of product and merchandising. And next month, a newly created California-based product design and development position will be filled by someone from the German office.

Now, as fashion insiders look to the next comeback shoe, the outdoorsy Teva brand has emerged as a leading contender. Indeed, on the spring ’14 runways, Marni, Prada and Tommy Hilfiger all showed extreme versions of the foam-soled, Velcro-strap classic, featuring glitter, crystals and flatforms.

“I am really happy that comfort is cool for spring ’14,” said Lucky Editor-in-Chief Eva Chen. She is known to swap her Balenciaga stilettos for the cultish all-black Birkenstock Arizona (purchased at insider favorite Anatomica in Paris) between fashion shows. “I chased someone down the street to find out where she got them,” Chen said. “It was like finding a unicorn.”

With a sizable collection of hard-to-come-by Birkenstock versions, the editor recently gravitated toward Teva as well, snapping up a pair of the brand’s Mush Universal style in bright orange, which quickly sold out after she tweeted about them. “It’s not the Teva from the 1990s, with turquoise-and-purple embroidered webbing, but rather, neoprene,” Chen said. “They have more of a surf vibe than before. That’s crucial as well.”

For Michelle Montanano, product line manager for Goleta, Calif.-based Teva, the revival dovetails nicely with the company’s 30th anniversary, which it will mark with the spring ’14 launch of an Originals Pack, a collection of best-sellers with new twists. “We’re focusing on styles that are very close to the [classic] Universal sandal, but with updated colors in some archival patterns,” Montanano said.

The brand also had strong retail placement this year in Urban Outfitters, and it will add Nordstrom for spring. Additionally, it has begun showing in more directional trade shows such as Capsule and Agenda . “There’s a nostalgic feel for people who have been with the brand forever,” Montanano said. “But the great thing is, when you look at it as an iconic product, there are so many different things you can do.”

“I would love to see Dr. Scholl’s come back. Clogs also may have a moment, thanks to the Louis Vuitton resort ’14 show. And I’m sure Isabel Marant’s studded sandals will be reinterpreted [by mass brands] this summer,” she said, adding that wooden soles, which appeared on the runways at Sacai and Stella McCartney, appear to be the natural evolution of this movement.