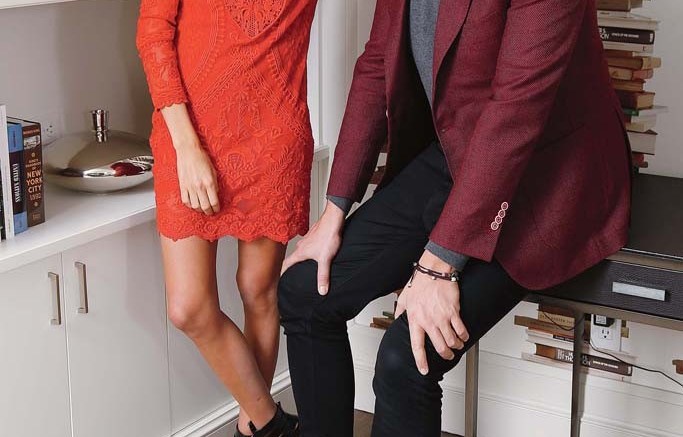 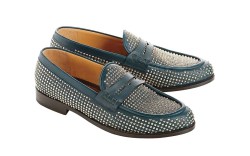 Louis Leeman and Erica Pelosini are a study in contrasts. The duo behind men’s shoe label Louis Leeman is both exuberant and low-key, energetic and thoughtful. And their complementary attributes are reflected in their footwear designs.

“Louis is more classic, I’m more rock ’n’ roll, and our shoes are the middle of that,” said Pelosini, 28.

Indeed, the pair has created a collection that deftly toes the line between traditional and trendy, using modern detailing such as metal embellishments, Swarovski crystals, embroidery and studs for a unique approach. The brand, which debuted for spring ’12, already has developed a global following for its Italian-made formal slippers, loafers, oxfords, drivers, boat shoes and sneakers, retailing for $450 to $1,100.

“The quality somehow gets lost in [a lot of the] more fashion-forward product available now,” said Leeman, 29. “Men love handmade shoes, so we thought it would be great if you could combine that quality with more fashion. That’s a big part of what we are trying to do — use those elements from the classic shoes and combine them into more [of-the-moment] styles.”

That vision has helped them double the number of retailers that carry their label this year. Notable accounts include Saks Fifth Avenue, Bergdorf Goodman, Harrods, Selfridges and Level Shoe District in Dubai. And next year, the brand will open its own store on New York’s Madison Avenue.

The story behind the launch of Louis Leeman is almost fairytale-like.

Leeman trained at the Polimoda International Institute of Fashion Design & Marketing in Florence, Italy, where he met Pelosini. They continued their studies at the Instituto Marangoni in Milan, and afterward moved to Paris, where they are now based.

The two combined their education in fashion design with Leeman’s background in tailoring and Pelosini’s work at Japanese Vogue to launch their own label. They quickly secured a factory in Italy and attended Pitti Uomo with their debut collection.

Saks signed on for the first season. Eric Jennings, men’s fashion director at the department store, said the retailer has been pleased with the label’s first two seasons and will continue to carry it in the flagship New York and Beverly Hills, Calif., locations.

“The line stands out because of Louis’ creativity and his distinct point of view,” said Jennings. “He and his team have proven to be supportive partners of our business by training our associates, bringing artisans to the stores and allowing our customers to create custom-made shoes.”

In fact, the designers recently traversed the world, supporting retailers including Joyce in Shanghai and Hong Kong; Isetan in Tokyo; Harrods in London; and Level. A dedicated pop-up in Harrods will return in the early new year.

“The Louis Leeman offering resonates with our customers for not only an incredibly high level of craftsmanship but also the element of fun that comes across in the product,” said Jason Broderick, fashion director for menswear, sports and fine watches at Harrods. “We pride ourselves on supporting talented and forward-thinking brands to meet the needs of the evolving menswear market, and we have been very pleased with the results.”

Added Alberto Oliveros, head of buying at Level, “The men’s footwear segment has traditionally been quite safe and conservative. Louis Leeman is one of few brands that offered men the chance to express themselves and stand out in a crowd. I believe it is one of the first to have offered this positioning. As a young brand, the future is very bright for Louis Leeman, and it has the ability to set trends for men’s footwear — and that is unique nowadays.”

All the attention has meant adding a factory to handle the orders. Another facility in Tuscany now produces the sneaker offering, which includes three new styles for spring ’14.

But the couple is adamant that developing the brand has not been as simple as it’s looked.

“Nothing is easy,” said Pelosini. “You just have to try the best you can, and try to make things happen with what you have.”

In the beginning they started with a small budget of family money, and a footwear collaboration with Roberto Cavalli — and later minority investors — helped finance the label’s growth.

As Leeman and Pelosini prepare to marry in July in Capri, wedding planning has taken a backseat to their label’s obligations. As orders have increased — requests from Johnny Depp and members of the Rolling Stones have helped — the designers are even more focused on distribution and brand identity.

“It’s nice because we put so much effort into this,” said Leeman. “We travel all over, and when you see [the results], you know it’s getting there.”