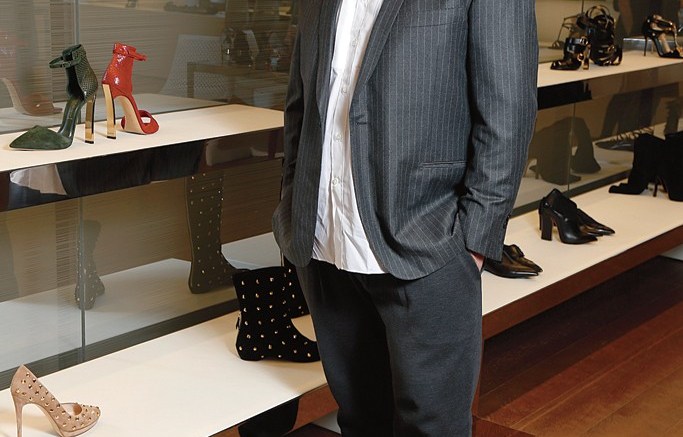 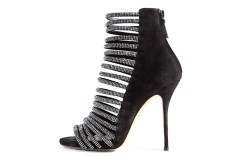 Cesare Casadei likes to push the envelope, and fall ’13 will be no different.

The creative director of Milan-based shoe label Casadei added fresh incarnations of his blade heel — including bold, 12.5-centimeter styles in a collaboration with Prabal Gurung — as well as menswear-inspired and hidden-wedge boots that toe the line between sporty and chic.

Still, everything he does is in line with the DNA of the company his parents founded in 1958. “That’s one thing that never changes,” he said. “We talk all the time about numbers, but my shoes have a soul that is important to me. [The underlying philosophy that] backs the collection is in my blood. This is a story of tradition.”

To emphasize its roots, Casadei is preparing to open a branded boutique in Florence, Italy, in April, on Via Tornabuoni, the same street where the family’s first Italian flagship bowed in 1980. And Casadei noted that additional stores are in the works. (The company already operates 16 boutiques globally.)

According to Casadei, the business grew 20 percent in 2012 and is expecting larger gains this year, with a $50 million sales goal for 2013. Retail expansion, via both e-commerce and brick-and-mortar channels, is the brand’s main focus for this year. The label launched in-house e-commerce early this month, and its next step is to take Casadei’s branded boutique presence to the U.S., building a full-fledged retail network in such cities as New York, Miami and Beverly Hills, Calif. Although plans are still in the early stages, “the future of our image is in retail,” Casadei said.

The firm also is working to boost its door count at department stores and independents in the U.S. While the bulk of its business is still in Europe, it has about 25 wholesale accounts in the U.S., including Barneys New York and Neiman Marcus, as well as independents The Shoe Box and Chuckies in New York. Online, more than 30 percent of visitors to the label’s own website are from the States, Casadei said.

Chuckies owner Rich Erani said the made-in-Italy label has the potential to be more successful here. “I have been a follower of Casadei for many years,” he added. “When you walk in the showroom, you can sense the generations of talent and artistry that goes into every shoe. I’ve always felt they deserve much bigger recognition in the U.S.”

Casadei’s visibility here is getting a bump from a spate of new celebrity clients, including Beyoncé, who sported a pair of custom embroidered, crystal-laden thigh-high boots in red suede during an opulent promo video for her upcoming world tour. Actresses Amy Adams, Jennifer Lawrence, Anne Hathaway and Rose Byrne have also recently stepped out in Casadei styles.

“[Celebrity attention] has always been important,” said the designer, “but now it is a boom that we have not seen before. Even though we have been around for a long time, we are repositioning ourselves in the U.S.”

Part of the strategy has been to further develop the collection. For fall, the label will introduce more casual daytime looks, such as leather fold-over boots. Some of the looks feature hidden wedges, shearling linings and soles of rubber, a new material for the brand.

“We have to consider the evolving lives of women,” Casadei said. “[A casual look] is very different from the image of Casadei as a high heel, but it is still sexy and it still has elements of femininity and design for women who are not afraid of their sensuality, or to take center stage. I now consider Casadei a 360-degree collection.”

The designer added that the season’s mix, which retails for $520 to $2,500, is about “masculine and feminine, a kind of tension and a new mood, a new evolution and a changing business.”

He takes inspiration from New York, where his showroom overlooks Central Park, and from his wife and business partner, Alessandra. “We share the same passion for our job,” he said, recalling that their first date included a trip to his family’s shoe factory. “My wife is my icon when I am thinking and talking about shoes. Alessandra is the feminine part of me, my Gemini.”

Casadei also is heavily influenced by rock stars from the 1980s (Chrissie Hynde and Grace Jones are his muses for fall) and by color, despite the fall ’13 collection’s emphasis on darker tones. “There is a lot of black in this collection, because we are in a very particular moment,” he said, “but I consider Casadei a technicolor world.”

With the expanded offering and plans in motion for growth, Casadei is quick to point out that the globalized market remains a challenge. “At the beginning, only shoemakers did shoes, and now everyone does shoes,” he said. “But the final customer knows the price of quality and the thought that you put into a shoe. That’s why we are growing season by season, even in a time of [economic] crisis.”