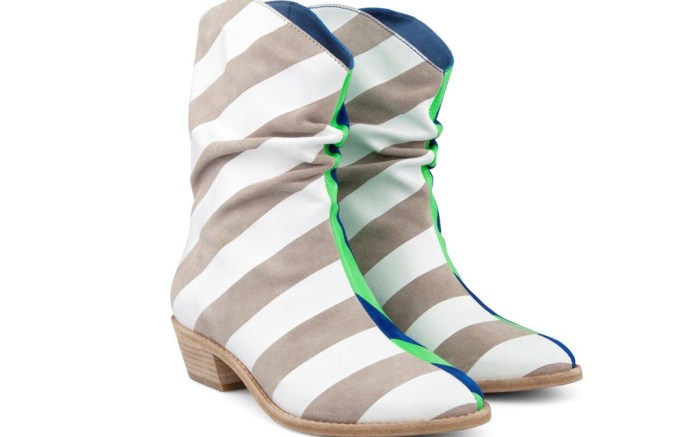 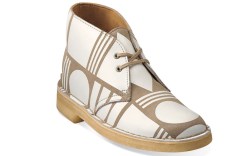 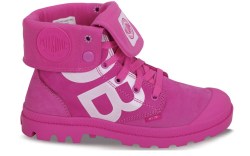 Seeing Double
Camper celebrates the 25th anniversary of its Twins collection of mismatched shoes with a special-edition collection created with German ready-to-wear designer Bernhard Willhelm. Willhelm, who has worked with Camper for the past 10 seasons, has crafted two styles for fall ’13: a Western-inspired women’s boot and a men’s wingtip. Both are detailed in bold, color-contrasting stripes. Retailing for $360 for the women’s boot and $275 for the men’s style, the shoes will be available in select Camper stores in the U.S. and online at Camper.com. Delivery is slated for mid-November.

Desert Storm
Clarks collaborated with London creative group Patternity to put a twist on the iconic Desert Boot for spring ’14. Patternity, which bases its design approach on finding inspiration in everything, including photography, art and fashion, has developed an exclusive graphic pattern based on the shapes of everyday things. The result is a lacquered geometric print on suede in two colorways. Set to deliver in January, the men’s look retails for $130, while the women’s costs $120.

Mob Scene
Women’s streetwear brand Married to the Mob and Palladium pooled their design resources for spring ’14 for a special take on the iconic Baggy boot style. The Palladium x MTTM boot — a blend of feminine and urban influences — is made of bright-pink and black nubuck and features the MTTM logo on the upper. The boots, retailing for $140, are available in limited quantities at select specialty stores in February.