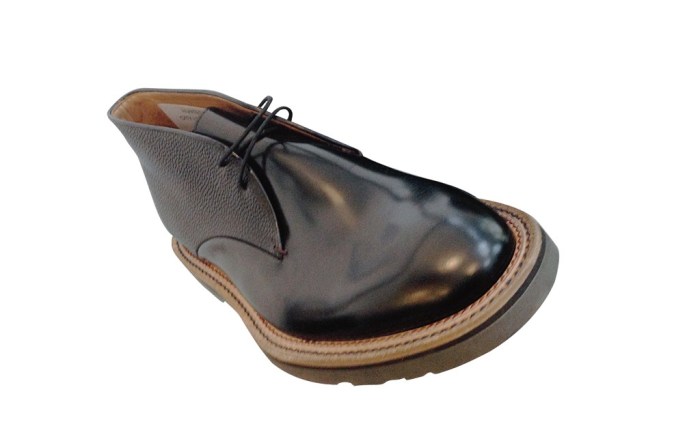 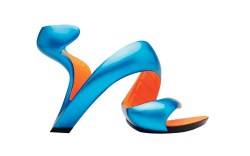 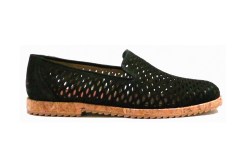 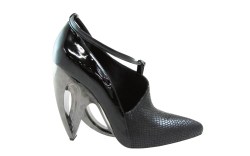 British Invasion
For fall ’13, Bloomingdale’s is all about British style in the men’s category. As part of a special marketing campaign, the store is featuring exclusive styles and capsule collections from more than 40 brands and designers including Barbour, Burberry, Liberty London, McQ, Ted Baker and Oliver Spencer. (Select women’s looks and a few décor pieces celebrating the theme also will be available.) Four exclusive men’s footwear looks will be sold: a Chelsea boot from Harrys of London, a lace-up boot from Hudson, a chukka boot by Paul Smith (at left) and a gray boot from Church’s. Retail prices for the shoes range from $290 to $700.

Softer Step
London-based Julian Hakes put a new spin on his eponymous label’s singular, spiral-shaped women’s look, the Mojito (above, right), for fall ’13. The fashion-forward shoe is getting a 3-D padded insole, aimed at making it more wearable. The revamped style retails for $250 to $400 and is slated to hit U.S. retail in July. The improvements have boosted buys for fall, including orders from boutiques in Atlanta, Los Angeles and San Francisco, according to the brand. Hakes noted that he came up with the idea for an enhanced insole in February, while helping prospective buyers try on samples at FN Platform. “The response from testing has been very positive,” the designer added.

Second Act
Matt Bernson will keep men shod this spring. The New York-based designer, known for his women’s line, is stepping back into the men’s business with a collection of trend-driven looks targeting 25- to 35-year-old creative types. Bernson briefly offered men’s in the past, but took a hiatus in 2008 when the factory producing the shoes closed. He tested a three-style capsule collection in spring ’12 in his New York store and expanded the spring ’14 line for wholesale. The offering will include such looks as a perfed smoking slipper (at left), rubber-sole oxford and sandals on leather bottoms. Targeted at better department and specialty stores, the shoes start at $225 and will deliver in January.

Learning Experience
Eight fashion grads are ending their time at Parsons The New School for Design on a high note, as their footwear designs are set to go on display at the Iris boutique in Manhattan. Parsons teamed up with The Shoe Polytechnic in Padova, Italy, and Venice, Italy-based Iris for the fourth time to select eight seniors from a pool of 75. Their shoe designs, which were unveiled at the 2013 Parsons Fashion Benefit on May 22, will be exhibited at the Iris flagship during FFANY, June 5-7, including the style above, by Sooyeon Park. “The project mirrors the process a [professional footwear] designer [goes through], from creation to prototype to final sample to being inside a luxury retail environment,” said Brooks Tietjen, president and CEO of Iris’ North American division, Onward Luxury Group. “[The exhibition] piques customers’ interest, and they always ask if the shoes are for sale.”