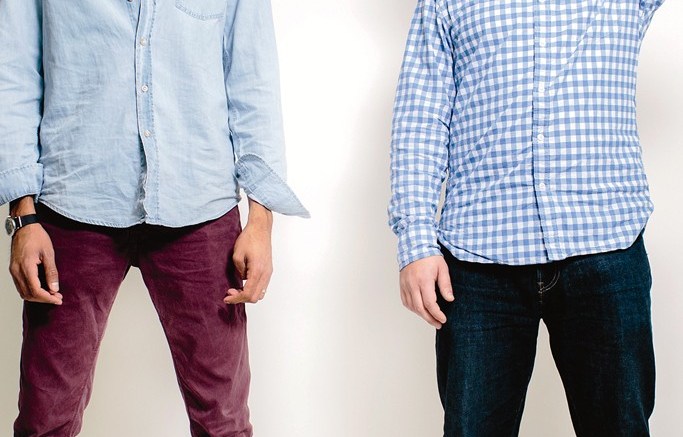 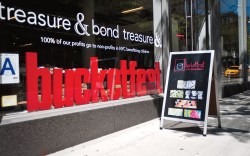 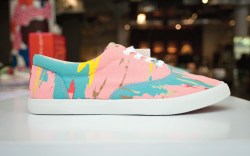 Bucketfeet gives artists a different canvas on which to paint.

The shoe startup launched in 2011 around the concept of making each style unique. Uppers feature individual motifs by different painters from around the world. More than 40 artists from 20 countries have designed patterns for Bucketfeet, which offers two silhouettes for both men and women. Every collaborator receives a portion of the sales from their shoe.

“We based this company on the idea that art is universal and that it can connect people,” said co-founder and CEO Raaja Nemani. “The shoes beg to be talked about, and we want those conversations to happen because those stories help connect our consumers to the artists and our brand.”

The Chicago-based label was born in Buenos Aires, Argentina, where Nemani met artist and co-founder Aaron Firestein on a trip across South America in 2008. Firestein customized a pair of sneakers for Nemani, who then wore them throughout his journey.

“I was going everywhere with these loud designs on my shoes, and it became an icebreaker for a lot of the people I met,” said Nemani, who at the time had taken a hiatus from his finance career. “I had a story to tell about Aaron, the shoes and the design, so that was the inspiration for me.”

Nemani and Firestein reconnected in 2010 and decided to launch the company, with Nemani handling the business side and Firestein overseeing the creative direction.

Now, Bucketfeet is enjoying steady growth. The brand began wholesaling in 2012 and already distributes to about 100 global boutiques (though half of total sales still come from its e-commerce site). Overall, sales grew twofold in 2012 over 2011, and this year the company is projecting a rise of about 430 percent over 2012. The staff has expanded to 14, from two.

With the backing of private investors, Bucketfeet looks to boost business even more.

But growth hasn’t always been easy for the brand. As newcomers to footwear, the founders faced a sharp learning curve when it came to understanding the industry.

“When you launch, you’re not prepared for the operational hurdle that comes with the footwear market in particular,” Nemani said, adding that getting on the right production schedule for buyers was one obstacle.

Creating brand awareness is another ongoing challenge for Bucketfeet. With limited marketing resources, compared with other players in the market, Bucketfeet relies on cost-effective platforms such as social media to reach consumers, Nemani said.

“We’re trying to come up with creative ways to get in front of people,” he said. “Sometimes it’s easier said than done.”

This spring, the brand was part of a temporary pop-up installation inside Nordstrom-owned Treasure & Bond in New York, where it unveiled an interactive illuminated display, which projected images by Bucketfeet artists on the walls and out the windows of the store. Several of the brand’s collaborators also came into the shop and live-painted on the walls.

Treasure & Bond GM Paige Boggs said the gallery-like installation was so successful that the retailer extended Bucketfeet’s participation to cover the entire summer, from the planned one month.

“We don’t carry a large assortment of footwear, so dedicating a shop or art gallery space to Bucketfeet felt like an easy way to appeal to the broad mix of customers who visit the store,” Boggs said. “We felt strongly that the story behind both the brand and each artist would be of interest to customers.”

Nemani said he hopes to leverage the success at Treasure & Bond to gain deeper penetration in the New York market. “Our brand aligns very closely with the New York consumer,” he said. “In terms of strategy, we’re building our sales team, so internally we have some resources dedicated to knocking on doors.”

In the U.S., Bucketfeet already has seen traction in such warm-weather markets as California, Texas, Arizona and Florida. The brand also aims to introduce its pop-up concept to other retailers.

Scott Starbuck, owner of Chicago-based boutique City Soles, partnered with Bucketfeet for a shop-in-shop earlier this month. He has carried the brand since the beginning of the year and said the shoes have been a hit almost equally between men and women.

The owner added that the $65 price point and brand story also have helped spur sales. And looking ahead, Starbuck is bullish about Bucketfeet’s potential to grow.

“It’s in that casual, ath-leisure crossover market, and we know those markets are massive,” he said. “It’s a really approachable price point, and fashionwise, [Bucketfeet] can cross over into a number of areas, so the sky is truly the limit.”