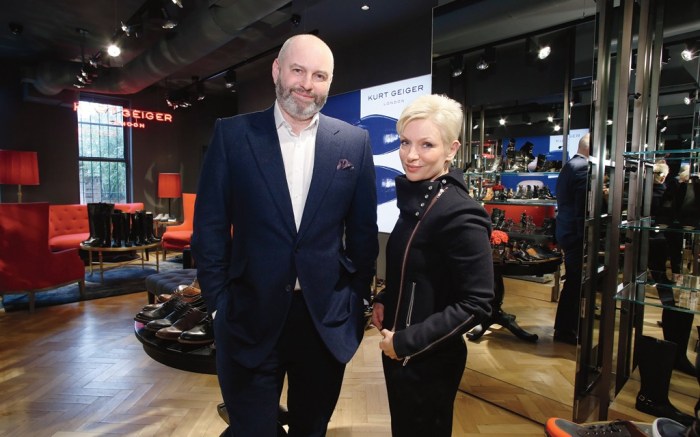 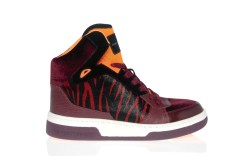 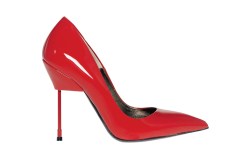 For decades, Kurt Geiger has been a dominant name in the U.K. Now the company is taking major steps to be as widely known in the U.S. market.

After bowing three boutiques and an e-commerce site here in the past year, Kurt Geiger has inked an exclusive deal with Nordstrom Inc. for fall ’13, CEO Neil Clifford revealed to Footwear News. As a result, The Jones Group Inc.-owned firm will launch its Kurt Geiger London, KG Kurt Geiger and Carvela brands for men and women in 10 to 20 top Nordstrom doors across the country.

“We didn’t want to rush into wholesale, but now we’re ready,” Clifford said, adding that the firm had been in discussions with Nordstrom for about 18 months. “We’ve known and appreciated them and what they do for a long time. They’re great shoe people.”

Nordstrom also was bullish about the union.

“We’re always looking for compelling new merchandise to better serve customers and we think they’ll make a terrific addition to our offering,” said Scott Meden, EVP and GMM of shoes. “Not only does the product look great , but they’re sharp merchants with an impressive store presence worldwide. We appreciate that they think like a retailer, and clearly they’ve had a lot of success in taking care of customers over the years.”

The Nordstrom push is just one part of Kurt Geiger’s strategy to reach $100 million in U.S. sales in three years. It’s a lofty goal, but Clifford said he believes the almost $400 million company has the right plan for success, especially if the U.S. economy continues to improve.

“There is definitely a confidence that America is bouncing back faster than the rest of the world,” Clifford said. “Now is the time for us to break out.”

The firm — which operates the footwear departments in Harrods, Selfridges and Liberty, among other retailers — is busy plotting additional expansion for branded stores.

A flagship in New York’s Soho neighborhood is on deck, as well as doors in Las Vegas, Los Angeles and Miami, among other locales. (Kurt Geiger already has locations on Bleecker Street in New York, at South Coast Plaza in Costa Mesa, Calif., and in San Francisco.)

“Their efforts so far in the U.S. have been tremendously well received,” said Richard Dickson, president and CEO of branded businesses for The Jones Group. “The brand represents a new energy in the footwear space. We have the right means to grow it quickly.”

Here, Clifford and Rebecca Farrar-Hockley, the firm’s buying and creative director, sound off on the big opportunities in America, designers that are breaking out in London and the rise of the men’s market.

How many American consumers are aware of the Kurt Geiger name?
NC: More than we thought, but not enough. We have a lot of work to do, but we believe that good product always floats to the top. Our customer is savvy enough to search for it. We aren’t coming as a me-too business. We have 29 designers in our London design studio dedicated to these brands.

What has been the biggest surprise about the U.S. market so far?
RFH: We thought some of our shoes were a touch edgy for the U.S. market, but what we’re finding is that the most fashionable styles are doing the best. The conservative stuff already exists here. People also have been really surprised by the price point of our Kurt Geiger London line ($200 to $915). All the shoes are made in Italy, but they’re still about half the price of most luxury brands.

How has Jones helped you execute your plans?
NC: The U.K. is the size of Florida in terms of population and size, so it’s a bit of a miracle that we’re a $400 million company. Jones understands scale. They’ve pushed us to think constructively about how we can execute our plan and how long it will take. They have been very supportive and given us the confidence to move forward.

RFH: There is also the practical infrastructure such as distribution centers they have helped us with. They are enabling us to do things a lot more quickly than if we had been on our own.

Why was Nordstrom the right fit for the wholesale launch?
NC: From our perspective, it’s a dream partnership. We just spent a whole day with nine members of their team here in our Bleecker Street store. We’ve also been to Seattle to see them. They take what they do very seriously. We have been able to hammer out a good strategy together.

What areas of the country are ripe for your stores?
NC: Hopefully, we will have a Soho shop open in the back half of this year. Next year, we will be in Las Vegas, Miami and Los Angeles. Soho will be our home base in the U.S. market, where we can house a press team, a Web team, a wholesale space and a shop. We’re looking seriously at three or four spaces, but the tricky thing is finding something we can afford. We don’t like stores that don’t make money.

Is it difficult to juggle your own brands with the department store concession side of the business?
RFH: We have completely different teams. In essence, they don’t meet. My designers aren’t walking around our shoe floors; they are independent. It’s a little bit like what Nordstrom does. They have a huge private-label business.

How is your department store business faring right now?
NC: Business in the luxury space is quite strong. We’ve had positive [comparable-store sales], and we’re happy with that since the U.K. and Europe aren’t the easiest places to be right now. We’ve banned the weather conversation internally, but snow is not ideal at the end of March. [On the bright side], consumers still want to buy boots. They are double [our numbers from] last year and we haven’t had to put them on sale. Ugg Australia has been up 100 percent every week.

RFH: The trainer trend has been the biggest change for us. Our fastest stock turns are now all fashion sneakers.

What are the top-performing brands in your department store portfolio?
RFH: Manolo Blahnik is surpassing all of our expectations. We are excited about Roger Vivier, which clearly has all the ingredients to be a much bigger brand. We also are seeing amazing results from Saint Laurent and Valentino, both of which will continue to get stronger, in both genders.

What emerging designers are you most enthusiastic about?
RFH: We love Sophia Webster right now. And although they can’t be considered new anymore, Charlotte Olympia and Nicholas Kirkwood are gaining real momentum. These are all brands we will be growing. We are particularly excited to launch Nicholas’ men’s shoes for fall.

Why does the men’s business have so much momentum right now?
NC: We are the new women. American menswear is on fire, but there has always been a dandiness to the British guy. We’ve got Savile Row, Carnaby Street, that whole 1960s thing. Fashion is under our skin.

RFH: Men’s fashion is as important as women’s in the U.K. I’ve been selling “women’s brands” to boys for five years now. Here, in our Bleecker Street store, without us doing anything to attract the male consumer — after all, we have a chandelier full of women’s shoes in our window — 30 percent of sales are coming from the men’s side. Men are loyal. When they discover they like something, they’re back all the time.

You’re celebrating five decades this year. Where do you want to be 50 years from now?
NC: The business will be a lot more global. Next year will start a big push East for us. We’re not focusing solely on America. But we’re not a credible footwear and accessories business if we’re not credible in America.