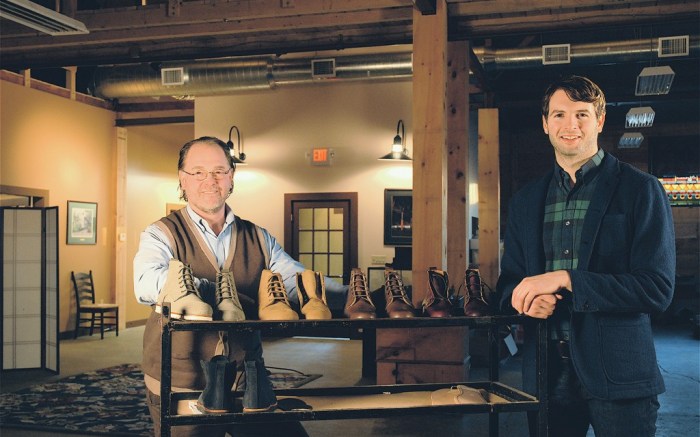 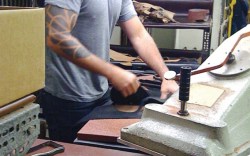 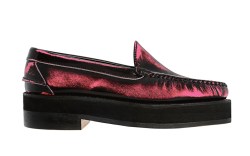 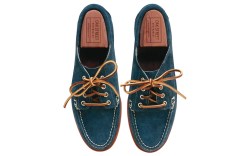 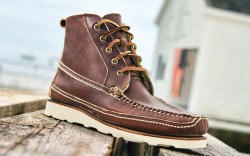 Maine is proving to be ground zero for the Made in America footwear resurgence.

As many footwear brands have focused their business strategies and marketing messages around the American-made moniker, some are capitalizing on the fact that their handsewn collections are specifically being produced in Maine.

Once a hub for American footwear manufacturing, the state’s first shoe factory was established in Auburn in 1835. The 1980s saw domestic factories struggling to compete with lower-priced Asian imports, but Maine’s rich shoe heritage is again a strong selling point.

And brands such as Sperry Top-Sider and Sebago, as well as Alejandro Ingelmo, are getting out the made-in-Maine story through a variety of marketing avenues, including hang tags, messages on shoeboxes and online videos.

According to some Maine-based factories, vendors are even requesting they stamp “made in Maine” inside every shoe.

“[It’s] a nod to American craftsmanship,” George Vlagos, founder and design director of Chicago-based Oak Street Bootmakers, said about his men’s line launched in 2010 and produced almost exclusively in Maine. “There’s nothing more inherently American than a handsewn [shoe]. It’s about quality and pride in American manufacturing.”

Mike Rancourt founded his Lewiston-based manufacturing firm, Rancourt & Co., in 2009 and works with heritage brands Bass and Sperry. “Most of these legacy companies were originally located in Maine,” he said. “Authentic handsewn [constructions] for brands like these make their collections more relevant.” According to Rancourt, who also does a small branded business, his 2012 revenue was up 30 percent over 2011, with another 5 percent increase expected this year.

While boat shoes have a long history in Maine, Rancourt’s son Kyle Rancourt, VP of sales and marketing, noted these looks are now resonating with a younger audience, from 28 to 32 years old. “There’s a certain excitement about them,” he said. “There’s a younger generation who cares about made in the U.S., and [they] want to seek out people like us.”

Rancourt & Co. is one of a handful of manufacturers producing handsewn footwear in Maine. It’s joined by Highland Shoe Co., in Brewer, which produces footwear for Sperry and Red Wing, among others. According to Highland founder Adam Sutton, business was up 20 percent in 2012 over the prior year, with production at 400 pairs per week. “People are getting tired of mass manufacturing,” he said about the return to traditional shoemaking methods. However, he acknowledged, there are a limited number of people trained in the art of hand sewing, creating challenges down the road. “If we can spend the time and go to schools and offer training to learn the craft, we could [grow] the workforce,” he said.

Maine craftsmanship, however, comes with a hefty price tag.

Due to the positive reaction to the initial collection, Bass is expanding the program with a series of looks targeting Bloomingdale’s and Nordstrom, as well as better independents. That collection will launch for fall ’13 with prices of $300 to $650.

Still, Jim McCormick, president of Bass wholesale, said consumers are willing to pay for quality goods. “Consumers like products made in the U.S.,” said McCormick. “They’re looking for value. It’s about the authenticity and heritage of the brand.”

For Sperry, the higher prices on its Handcrafted in Maine collection, retailing for just under $400, does not intimidate consumers. “There’s a [consumer] segment who cares about products made in the U.S. and knows they have a premium price but love the craftsmanship and [are willing] to pay for it,” said Dave Mesicek, senior marketing manager for trends at Sperry.

To promote the Maine line, launched in fall ’12, Sperry is producing special packaging as well as a five-minute video on its website about the art of handsewn shoemaking. Shot in the Highland Shoe factory, it is narrated by Sperry designer James Zabala, and follows the steps involved in making a pair of boat shoes.

And that story is a key selling feature at retail.

At Conveyor at Fred Segal, in Santa Monica, Calif., which launched the collection for fall ’12, manager Alex Bertucci said the made-in-Maine selling point is one that seems to connect with consumers. “We get people familiar with it,” said Bertucci. “There’s a nice allure to [the line’s] details. The shoes have a cobbled effect.”

There are few brands more connected to manufacturing in Maine than Eastland Shoe. The Freeport-based, family-owned business was founded in 1955 and operated a string of factories throughout the state until 2000, when it shuttered the last factory and shifted to an importing business model. However, in celebration of its 55th anniversary in 2010, it reintroduced a men’s handsewn collection under the Eastland Made in Maine label, contracted at an existing Maine factory.

According to Eastland VP Joshua Klein, consumers continue to gravitate toward the new product, with business doubling since its launch. “The more people talk about products made in the U.S., it benefits the country. And if [they] can be sourced in our home state, the better,” he said.

Zach Cooper, manager at Palmer Trading Co., a New York boutique specializing in domestically sourced goods, said the store has been carrying Eastland’s Maine collection since its launch. “When people come into the store, we let them know where [products] are made,” said Cooper. “It’s a selling point. Our shoppers are conscious of the origin of their clothes.” And for customers who simply wander into the store, Cooper noted the made-in-America story turns them on.

However, it’s not just Maine-rooted brands that are promoting the state’s shoe craft. Red Wing Shoe Co., based in Red Wing, Minn., has a long manufacturing history of its own in its native Minnesota, but it tapped Rancourt & Co. for a series of men’s handsewn footwear that launched in 2010 as part of its Heritage Collection of lifestyle looks inspired by period Red Wing styles.

“It was a natural extension of the collection,” said Steve Spencer, director of sales for Red Wing, noting the remainder of the collection is produced in its own U.S. factories in Minnesota and Missouri. “Maine is the birthplace of handsewn shoemaking,” he said. “It was a perfect fit for us. We saw a lot of synergy between what we do in Red Wing, [regarding] authenticity and craftsmanship, that’s deeply rooted in our community and the history of shoemaking.”

New York-based designer Alejandro Ingelmo also has been drawn to the state for a men’s and women’s collection bowing for spring ’13 that touts its origins on the sock linings. “I always wanted to do something outside the box,” said Ingelmo. “I wanted to do something domestic but that would be true to the brand. I wanted it to be the best quality. Handsewns are one of the things Maine is known for. I wanted [the collection] to be very true.”

Ingelmo interpreted the classic moccasin construction using novelty platform bottoms. “They’re not basic loafers; they have a downtown feel,” he said. In fact, it took some convincing by Ingelmo for the factory to update the classic silhouette with the new outsoles. “I spent a week on the production line.”

So far, the line, retailing from $495 to $800, has been picked up by Ingelmo’s current retail partners, including Neiman Marcus and Barneys. “It’s something I want [to have] in my collection season after season,” said Ingelmo. “It’s not a trend [for me].”

Sebago, based in Rockford, Mich., is also looking at its Handsewn in Maine collection, for the long term. “It’s more than a shoe from Maine,” said Gary Malamet, VP and GM for the brand, whose penny and tassel mocs launched for spring ’13 in stores including Saks Fifth Avenue and Bloomingdale’s with price points starting at $425. “It’s the pinnacle of what the brand represents. It brings up the caliber of [Sebago’s] position in the U.S. It will be an integral part of everything we do every season.”