AllSaints Is All In for Footwear 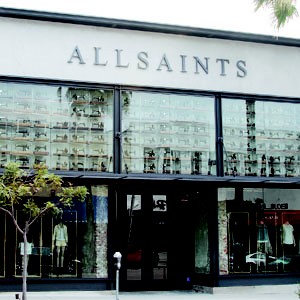 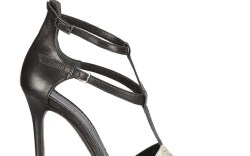 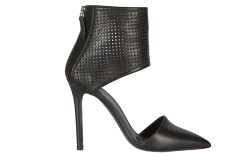 AllSaints, known for its edgy apparel, is putting a big focus on footwear.

The London-based brand, which debuted in the U.K. in 1994 and hit the U.S. in 2009, launched its first full women’s shoe collection in November. To showcase the looks, the label bowed 16 dedicated shoe salons inside select AllSaints boutiques, including those in London, Paris, New York, Las Vegas, Chicago and Los Angeles. The company also is highlighting the category with a “Below the Knee” ad campaign centered on a short film shot in New York.

AllSaints — which sells its clothing and accessories via branded e-commerce, 107 of its own stores throughout eight countries and 17 shop-in-shops at Bloomingdale’s — grew the footwear offering from a small selection of boots to a 43-piece collection spanning sleek stilettos and studded slippers. The made-in-Italy shoes, which incorporate leather, calf hair, suede and python, retail for $275 to $575. An even broader mix is set to roll out for spring ’14.

“AllSaints is already renowned for boots, so it was a natural extension into fashion flats, heels and loafers,” said William Kim, the firm’s CEO.

The move also will allow the label to go beyond casuals. “Traditionally, we had presented our brand [in the footwear market] in the context of military and biker boots showcasing toughness,” said AllSaints’ creative director, Wil Beedle. “We wanted to translate that toughness into more-elevated, sophisticated product that retains the core codes of the brand. That enabled us to evaluate and redefine the women’s silhouettes.”

Early reaction has been positive, according to Beedle. “We are having a great year,” he said. “Humbly, I would say we offer a different point of view from [other contemporary labels] in the U.S., through materials, silhouettes, proportion and attitude. It represents something that’s aspirational and cosmopolitan, but in perhaps a less studied way.”

The formula seems to be working. The brand, which boasts famous customers such as Beyoncé, Jessica Biel, Kristen Stewart and Sandra Bullock, got the stamp of approval for its shoes from at least one high-profile fan. “AllSaints has perfected luxurious basics with a modern edge,” said Rachel Zoe, who has featured the label on her fashion blog and is often photographed wearing the apparel and accessories. “I really love the new footwear collection. I can totally imagine a million girls I know wearing them.”

Now is an opportune time for AllSaints to capitalize on new categories. The firm has been engineering a financial turnaround since 2011, when it was acquired by Lion Capital and Goode Partners. The investment brought AllSaints back from the brink of bankruptcy, and the company has been in growth mode for the past year under Kim, who joined in October 2012. This year the label increased its branded door count, expanding its footprint in major markets such as Amsterdam and Los Angeles.

“This is a critical point in the label’s evolution,” Beedle said. “We are 19 years old in the U.K. and 4 years old in the U.S., and we are at a point where the disparate elements of the brand overlap creatively. We wanted to share a reinvigorated, momentum-filled, confident business with every element integrated.”

Shoes were a vital first step, he noted. “Footwear is essential. That’s why we focused on sourcing new materials and a new supply base out of Italy, to be able to craft and deliver the same accuracy and control that we do throughout the collection.”

The firm also has intensified its branding efforts to support the expansion. It launched its own film production unit, AllSaints Creative Studios, six months ago. One of the studio’s first in-house creations was the “Below the Knee” short film that appears on the label’s website and in stores this season. The documentary-style piece features interviews with dominatrices and other women working in New York’s fetish community — a risqué topic tempered by the fact that viewers see only the subjects’ legs and feet, wearing AllSaints shoes, of course.

A corresponding social media component asks consumers to submit their own black-and-white “below the knee” photos. Kim said the new initiatives are a reflection of the brand’s overall commitment to innovation, one of the most important factors in AllSaints’ comeback over the past two years. And he’s bullish about the firm’s prospects heading into 2014.

Next steps for AllSaints include more multimedia campaigns, additional footwear styles and in-store shoe salons and more non-apparel revamps. “This is just the beginning,” Kim said.