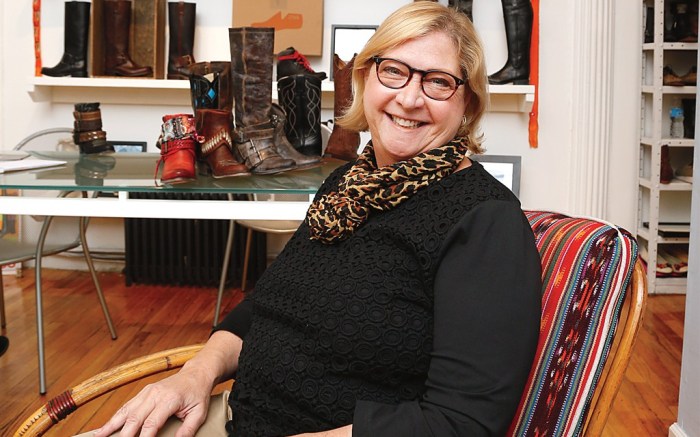 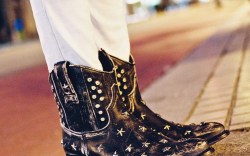 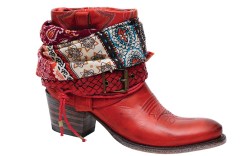 As Sendra celebrates an important milestone this year, the Spanish bootmaker sharpens its focus on classic Western styling reinterpreted for today’s consumers.

“We always do research into Western gear and vintage looks before we start a collection,” said Jamie Lawenda, design director for the U.S. and Canada, noting that the company has amassed more than 11,000 patterns in its archives. While Lawenda borrows traditional details from saddles and horse gear, she also keeps an eye on current interpretations of Western dressing. “Taylor Swift, along with girls in Brooklyn, N.Y., show how a cowboy boot can be worn with a very feminine summer dress,” said Lawenda. “And the new TV show ‘Nashville’ is a treat for me because the stars wear cowboy boots with current designer clothing.”

Originally known for its Goodyear-welted product for the utility and military markets, Sendra stepped into the Western business in the 1960s. Lawenda said the decision was sparked by hippies wearing cowboy boots in Spain during the period.

Today, the U.S. represents 22 percent of Sendra’s global revenues, with sales here up 7 percent in 2012 over 2011. New York-based Kingo Shoes U.S.A. distributes the brand in the U.S. and Canada, and the firm said sales are expected to increase by 10 percent this year. Current wholesale channels include Free People, City Soles in Chicago and Halo in Portland, Ore., as well as Western retailers Allens Boots in Austin, Texas, and Colorado Footwear in Vail, Colo. Next, the company is eyeing placement in high-end department stores.

Although all Sendra boots continue to be rooted in authentic Western styling and construction, Lawenda emphasized, “[They’re] for everyday people who enjoy the quality and comfort of a Goodyear boot, whether they live in Western cities like Austin or [urban places like] New York.”

Here, Lawenda talks about the cyclical nature of Western fashion and why the cowboy boot continues to resonate.

What is the must-have Western boot for today’s woman?
JL: A fold-over or pee-wee style. The short [silhouette is key] so you see most of the leg from a pant or with a dress. It’s the right proportion for today. It’s much more feminine and not cumbersome. You get the cute factor with all the Western design elements in a smaller package.

Who is today’s Western customer?
JL: You have a girl just coming out of college who’s seeing Western as fashion, but she’s never really worn it before. She may have worn some cowboy boots when she was a little girl, or they may have a history for her because her mother had vintage cowboy boots she [discovered] in her closet. Our customer is someone who understands their history and is intrigued that they’ve been around for a long time, but [the trend is] new to her.

The Western boot trend is very cyclical. What sparks its re-emergence?
JL: Movies, television, celebrities, designers. For example, you wouldn’t think the [now-defunct] D&G line would be inspiration for Western, but one season, it did the greatest Western-influenced clothing and boots. It was so fantastic and inspirational. It was all about stitching and embossing as opposed to underlays and overlays. Western came back again for a short period of time. Now it’s back because of Americana [looks] — people all over Europe were buying Sendra’s American flag pee-wee boot in red, white and blue during the London Olympics.

When Western becomes mainstream, how does Sendra go up against fashion brands that also interpret the trend?
JL: They can ruin it for authentic brands for the short term. [Because] they don’t have a factory base to make [Western boots] correctly, what you get is a style that may not fit the same way as an authentic Western boot. For example, they won’t mold to the foot the way a Goodyear-welted boot does. So at the end of the season, there’s [often] a lot of leftover product from [companies] that came into [the trend] for the moment. People will stop buying Western for a while because there’s a glut of it offered at a lower price.

What does Sendra do when the Western trend begins to wane?
JL: We turn to equestrian, motorcycle, higher heels. We disguise some of the more Western elements — like rather than doing a curve top, we do a straight top. We take less from Western and more from what’s current in fashion. We use heritage details in new ways.