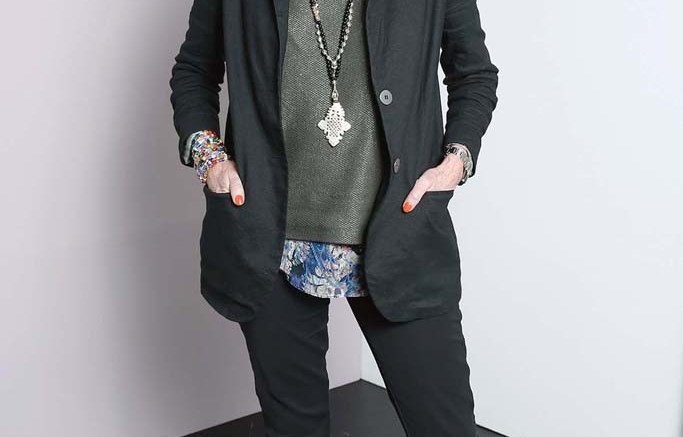 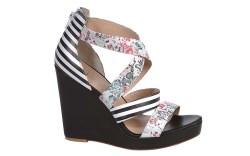 Nicole Miller loves shoes, which is not surprising, given that, like any major designer, she has spent her 31-year career in close proximity to all manner of exquisite footwear. Her personal collection spans vintage Givenchy to this season’s Jeffrey Campbell. And now the designer is more immersed in the category than ever. Miller’s own label relaunched shoes for spring ’14, via a recently inked licensing deal with Antebi Footwear Group LLC.

The brand had been producing its own limited styles over the past few years, but the revamp will allow it to reach a wider audience with a more robust retail presence and broader price range. The strappy sandals and wedges, showcasing Miller’s signature vibrant florals, pop colors and mixed prints, retail for $120 to $295. Although the label declined to reveal specific store partners, Miller said the buyer response has been positive.

The shoes also were well received on the runway and have garnered some early celebrity attention. Heather Graham and Ashley Judd both recently donned stiletto styles on the red carpet. “The footwear has definitely gotten out there,” Miller said.

Up next, fans of the label can expect the addition of boots, as well as a shift to a more casual, California aesthetic. “Pre-fall [’14] is sort of a bohemian Sausalito, [Calif.,] mood,” Miller revealed, noting that heel heights will come down slightly and constructions will have a “sturdier feel.”

The designer also talked with Footwear News about the brand-boosting power of Angelina Jolie, the tricky world of footwear licensing and her penchant for high-flying hobbies.

Why was Antebi Group a good match for the Nicole Miller footwear license?
NM: We worked really closely with [Antebi] to develop shoes that went with the [apparel] collection — shoes that were us. A lot of companies are set up in a very formulaic situation, and that’s how they envision shoe licensors — they shop the market, buy samples and then want to put your name on them — so in the past I’ve had to suffer through things that seemed like a hodgepodge. But we had a lot of input with this. We had digital-printed leather in the [spring ’14 apparel] collection, and we managed to do it in the footwear as well. We also have been playing around with laser cuts, so we have a lot of laser-cut offerings and mixed materials [in shoes]. With [Antebi’s] expertise, sourcing power and connections, it came out really well. The shoes have been selling well.

The spring footwear line has a more accessible opening price than in previous seasons. Was that an important factor when you were deciding on a licensee?
NM: Yes. There always will be higher-end [items in my collection], but shoes, [in general], have gotten out of control. I always used to buy the most expensive shoes, but now if it’s more than $1,000, I think twice, especially if I’m only going to wear them a few times.

What influences have helped you develop your overall aesthetic?
NM: I always had the fashion influence from my mother. She was quite the stylish person in Paris, I must say. But I also can be a more casual person. The American lifestyle is all about casual and comfort, so even if you want to dress cool, it’s in a casual way. I like that combination of dressy and casual together. That always works for me — a [fancy] top with jeans or a pleated skirt with a T-shirt.

With a client list that includes everyone from Jordin Sparks to Tyra Banks, what has been your most memorable celebrity moment so far?
NM: I always had a fantasy of dressing Angelina Jolie and Joss Stone, and I dressed them both in the same year. It was unbeknownst to me because they always work with stylists in Los Angeles, and they always borrow like three [brands], so you don’t know what they are going to wear. I found out circuitously, so that was exciting. When Angelina wore [a Nicole Miller] dress with Brad Pitt [at the “Mr. & Mrs. Smith” film premiere in 2005] and everyone was speculating about whether or not they were together, it was great because it was on the cover of, like, every magazine.

What do you do when you need to relax?
NM: I really like kiteboarding, even though I’m not very good. After three years, I’m starting to get up and go. I already ski, wakeboard and water-ski, but this is a bigger challenge. I am always doing crazy stuff. Two years ago I dragged my assistant to trapeze school. Oh, and I cook a lot, too. I’m always trying new recipes.