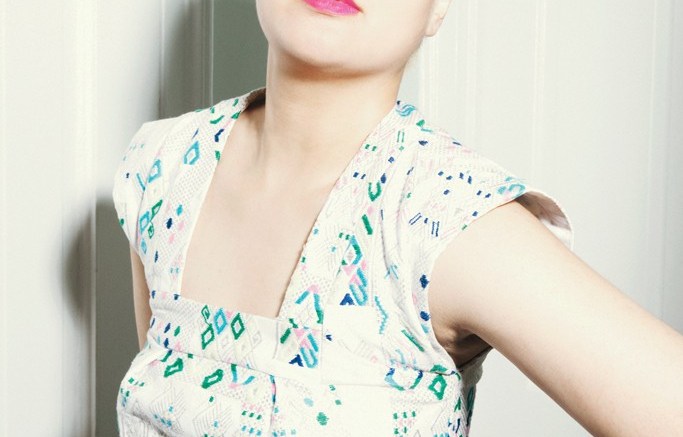 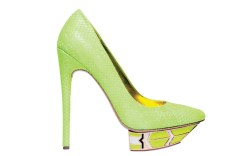 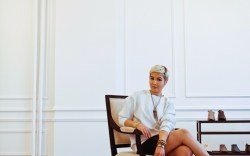 The former creative director of contemporary and designer brands at Camuto Group, who oversaw BCBG Max Azria Footwear and Hervé Léger, had artistry to spare when she began designing her own footwear for fun.

What began as a creative outlet quickly turned into her eponymous line that launched this past spring with her famous boss’ approval. “There were no real expectations. I was just having fun with it,” said Kirzhner, who recently stepped down from her post at Camuto Group to focus on her own brand full time.

Drawing inspiration from the art deco period, Kirzhner used bold geometric shapes in her first collection but promises to mix it up each season. “There will be a lot of luxe bohemian,” she said. “I’m also working on Western rock ’n’ roll themes. It still has some art deco, but it’s more Western and edgier. Expect some alien-like futuristic treatments, too.”

When envisioning the different directions of her collection, Kirzhner has a methodical approach. “Right now, my line reflects one aesthetic, but growing up in the industry, I like to take on new DNAs and develop the branding,” she said. For pre-spring, she chose pops of neon with exotic treatments, going much louder than the largely nude-and-black color palette of her first collection.

The young designer, whose signature includes cloisonné metalwork on her heels and platforms, will continue to use real gold plating on all the hardware. Kirzhner said maintaining an elevated aesthetic while keeping the price point accessible — at about $395 to $425 — is important.

As for distribution, Kirzhner launched on Bonfaire.com, and Anthropologie sells a couple of her sandal styles. Shopbop.com picked up the line for fall.

“The Ivy Kirzhner collection stood out because of the unique details and hardware used in the line,” said Shopbop DMM Stephanie Nelson. “Styles with micro studs and harnesses were most interesting.”

Here, Kirzhner discusses the response to the brand so far and what’s coming up next season.

What inspired your first collection?
IK: I’m a New Yorker, so I wanted to develop an aesthetic that encompasses the whole New York feel, but I’m also a world traveler and I come from different backgrounds, so I wanted to make sure that came across, too.

Have you faced any major challenges?
IK: You learn to expect challenges during the design process, but I was prepared to accept them. For any young creative director, the biggest challenge is numbers. I am no longer just accountable for the design and development of each collection but also for the company’s figures. This has always been the type of personal growth I’ve been searching for.

Will you introduce any new styles or patterns next season?
IK: For resort, the color palette is probably going to shock everyone. You’ll see a lot of neons and holographic treatments. It’s going to be very “space age.” I wanted to explore an edgy futuristic form. It’ll definitely be more experimental in terms of color palette, but also very wearable. For spring ’14, I’ll go back to being more organic.

Any other developments underway?
IK: I’m in the process of opening the official Ivy Kirzhner New York showroom in Soho, which is slated to be ready by the August FFANY show, [which starts today and runs through Wednesday]. We’ve also finalized our fall campaign, which hits this summer. And we’ve opened a whole slew of accounts for fall. We’re catering primarily to the cool, hip boutiques. It’s still small, but at the same time has a lot of promise. My hands are definitely full, but I’m having fun doing it.