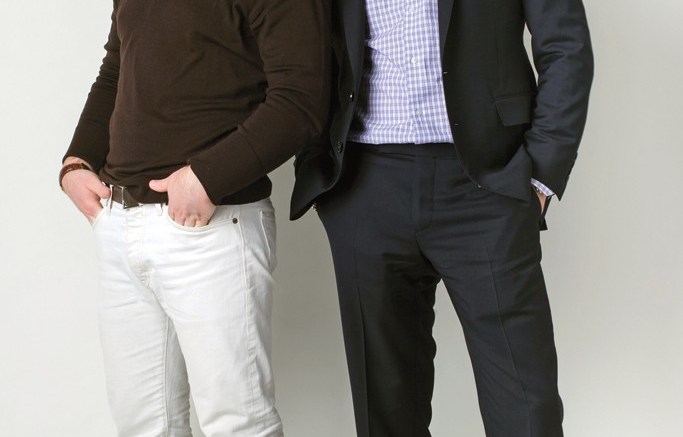 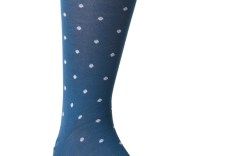 They say the devil is in the details. But the founders of men’s accessories label Hook & Albert have found a bit of divine inspiration in the small stuff.

Adam Schoenberg and Cory Rosenberg debuted the brand in fall ’11 as a way to add interest to traditional menswear with their take on dress socks, fabric lapel flowers and brightly colored shoelaces. Since then, they’ve quickly expanded to include loafer liners, elbow patches and ties. Cufflinks, as well as a formal category for its core products, are in the works for fall ’13. Additional launches — such as belts, jewelry and watch straps — are also in the pipeline.

And for fall, the duo will release a line of bow ties in collaboration with a celebrity who they declined to name — at least for now. “He is a fan of what we are doing; he was wearing our stuff. It was organic to say, ‘Let’s do something together,’” said Schoenberg, who through Hook & Albert has previously collaborated with Armstrong & Wilson, Ernest Alexander and the prostate cancer-awareness campaign Movember.

The partners’ steadfast focus on the sartorial man has landed them retail accounts with Nordstrom, Neiman Marcus, Saks Fifth Avenue and boutiques such as Scoop. And their rapid growth has led to positive business results. At the end of May, Hook & Albert had already surpassed its full-year 2012 revenues and was predicting at least a 150 percent rise in sales for 2013, according to Rosenberg.

Here, the two executives discuss their plan to move the menswear market forward with accessories.

Would you consider launching shoes?
AS: We never say never to anything, but our focus in the near term is not on developing a line of shoes. As the guys who brought colored shoelaces to the mass market, we are now figuring out how to reinvent the shoe with something else. I don’t want to give away too many details, because it’s in partnership with a major company, but it’s about continuing to offer accessories that can bring shoes to a different level.

CR: We are always trying to expand menswear. It hasn’t gone anywhere for a long time. And, especially in the accessories category, men are not given the options that women are. Traditionally, it’s a very women’s-heavy market. So men are left with what little we have and no one has bothered to take a step back and say, “Is there a way to make it better?”

Could a company like yours, offering men’s accessories, have existed 10 years ago?
CR: Ten years ago, maybe guys weren’t comfortable provoking a conversation about their wardrobes. We went through this period when if a guy dressed dapper, he was a metrosexual. If a guy took chances, he was a little too effeminate. Now, we are past that. In short, I don’t necessarily think we’d have the success we have now [back then], but eventually we would have caught up.

Merchandising is often a challenge with accessories. How have you managed to combat that issue?
AS: It still continues to be an issue for us and for other brands in the traditional retail environment. We have learned a lot from our partnership with Saks. If you walk into any Saks nationally you will see Hook & Albert lapel flowers everywhere. They have decided accessories don’t just need to be in one spot. Our lapel flowers, for example, are on suits in the formal section, in traditional menswear, in the shoe department. And now our lapel flowers are one of the top-selling items in the furnishing department week in and week out. So we learned this from Saks and have been able to offer it to everyone else.

What is your philosophy on collaborations?
AS: Collaborations are such a fun part of our business because it’s not calculated. It happens organically, and we do them with individuals or organizations we truly love.

CR: It’s exciting. The whole process is about expanding menswear. Brands that are similar to us, we love working with them. We don’t consider them competition. We consider it an opportunity to collaborate and inspire.

What is the biggest lesson you’ve learned since launching?
AS: To continue to evolve as a brand and not be afraid of what people think. When we first started, I remember shoelace conversations [when many people said], “I’m not going to take out my shoelaces.” But we really believed in it, and it became a huge trend. It was the same thing with the lapel flowers and the brightly colored no-show socks. When we look back now, as a small company, we have started three trends in the accessories menswear market because we weren’t afraid.

CR: We always, as a company and as a brand, have to evolve. In the fashion industry, the question is always what’s next. And [the challenge is] not to be reactive with it. Like with the elbow patches, we were on the forefront before things took off. If you are reactionary, it could hurt you in the end. But if you become that visionary, it could be a really great thing.