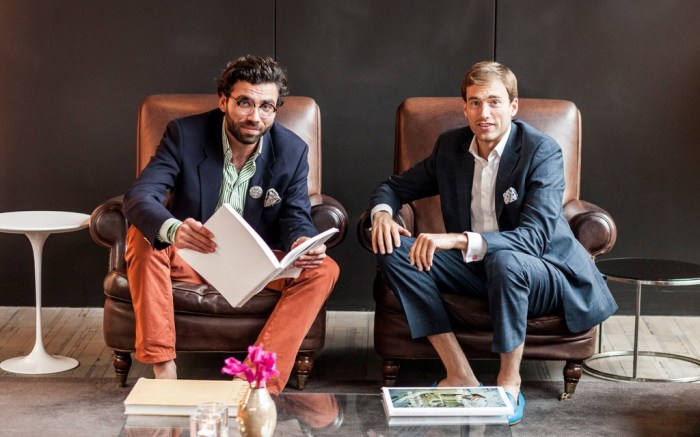 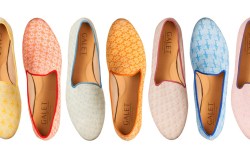 Galet may not be on store shelves yet, but the new men’s label is already in expansion mode.

The collection, launching for spring ’14, is based on classic smoking slippers. The debut line is made in France of canvas uppers and features patterns with hidden surprises. Each look will retail for $375.

“We’re really trying to find fresh ways to make the slipper — which has been a very classic but, as some would say, stale shoe — a bit more accessible and versatile,” said Jonathan Horemans, who co-founded the brand with Javier Goggins Campos. (The two have a background in accessories, having briefly sold magnetic collar stays for dress shirts.)

For spring, the two have secured a number of retailers, including Wolf & Badger in London and Common People in Mexico City. The shoes also are available for presale on Galet’s own website.

Now, the London-based duo is looking to further expand their offering with additional materials and services. Here, Horemans discusses his plans for the up-and-coming label.

1. What’s the goal with Galet?
JH: From a big-picture perspective, we’re trying to revolutionize the way men look at casual footwear. We want men to feel more comfortable adding color and something fun to their attire. We also wanted to make the slipper more accessible than it is now. Now, it’s either leather sole and velvet or very embroidered, which is great, but it’s very particular to certain events. It’s more formal. We want to be seen as a reference in casual footwear for men.

2. Do you see yourself branching out beyond the slipper at some point?
JH: For now, we will focus on this core model. But the natural evolution [would be to] create smaller sizes, so we can offer them to younger boys and men. Then it will also be more unisex, too.

3. Who do you see buying your shoe and where would he wear it?
JH: With our fabric ones, for the spring and summer they will be a huge hit when people are going to the pool or to the beach. You can take out the removable leather insole and throw them in the washing machine. So you can wear the shoes out to the Hamptons, wear them at the beach, if they get a bit dirty, you wash them and at night you can wear them out to cocktails. I wear the shoes with suits, but you can wear them with shorts, chinos, jeans. They’re quite versatile. It’s surprising how well these patterns, which you would think are very loud, blend in with other attire. Also, personally, I don’t wear a lot of loud prints on my shirts or my chinos. Therefore it’s nice to have an element of playfulness in your footwear.

4. What has been the biggest challenge?
JH: Two things — one is finding the craftsmen, because it’s a dying art. A lot of things get outsourced, but we are trying to bring shoemaking back to France. Our goal is to have a larger factory at some time. And then, for some people, maybe some older gentleman, they are shocked [by the look]. But once they wear it, they love it. At first, some people say, “Oh, I could never wear that.” But once they do, they realize it’s not actually that crazy. And that’s what we are trying to do — warm guys to [the look].

5. What’s coming up next?
JH: For our fall ’14 collection, we are going to be experimenting with some heavier fabrics, some grays, maybe a little more tweed-esque. And then to have the common thread of the surprises in the patterns, [we’ll make some without] the pattern, except we’ve picked four top surprises that people like and they will be somewhere at random on the shoe, a bit bigger than they are now [on the canvas ones]. [We’ll introduce] our leather line, and we’re now experimenting with laser printing on leather. And we have a limited-edition version with black pony hair and black rubber soles [for fall ’14]. We also are offering a bespoke service. We are in the process of creating an online glimpse into the factory, where you can pull your fabrics and create a shoe.