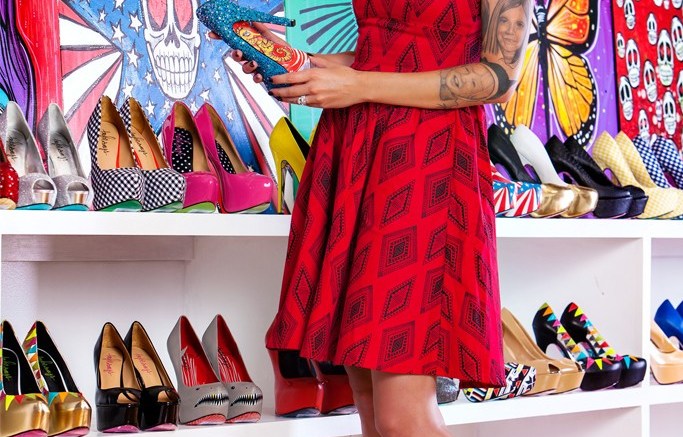 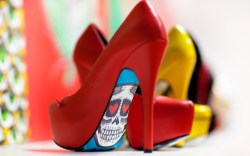 Taylor Reeve bowed her independent women’s line, TaylorSays, with a soft launch late last year, but the designer aims to make a splash for her second season.

Reeve is starting with a push for a broader retail presence, including debuting the collection at FN Platform next month.

“It’s really bright and loud and colorful and sort of in your face,” she said of the label, which retails from $120 to $270 at e-tailers such as Heels.com, Karmaloop.com and on the brand’s own e-commerce site.

An artist, Reeve’s tattoo-like mixed-media art pieces have appeared in a variety of places, but she started building a fashion following in 2009, when she began painting on the soles of shoes and selling the creations on Etsy.com

Reeve’s new label features platform pumps and stilettos. She will branch out to flats with painted uppers for fall ’13, as well as strappy sandals. “Right now, I’m focused on building out the heels and getting into new silhouettes,” she said. However, the designer added that she has her sights set on a big future. “I want to do swimwear, handbags and accessories. I make really cool pants where I draw all over them with Sharpies. I want to do dresses, too. I want to do it all.”

Reeve also chatted with Footwear News about the challenges of breaking into the market, her future plans and mingling with celebrities.

1. What was the most exciting moment of your first season?
TR: I was at the Golden Globes in the gifting suite, and that was amazing. The response was insane, and there were at least four or five girls who put the shoes on right then and walked out wearing them. Jaime Pressly was going crazy over the Sharkie style [featuring a grimacing shark’s face on the toe and a leather “fin” near the ankle]. A lot of the “Glee” cast came through, too.”

2. What niche does TaylorSays fill in the footwear market?
TR: It’s wearable art. More people are getting interested in art, especially graffiti, and more people are interested in do-it-yourself small business. I’ve been really active with my followers on Facebook, and they appreciate that I take the time to talk to each and every person I can.

3. As a new brand, what have been your biggest hurdles so far?
TR: I had a lot of obstacles in the beginning with getting them made. I used to hand-paint [each shoe], so I had to teach my manufacturer how to print on the sole. Since my name is on it, I want it to be perfect. Another thing that has been a little bit challenging is that the [heels] can be a little intimidating [for customers] because they are so high, but there is a hidden platform. Once people try them on, they’re like, “Oh, these are actually comfortable.”