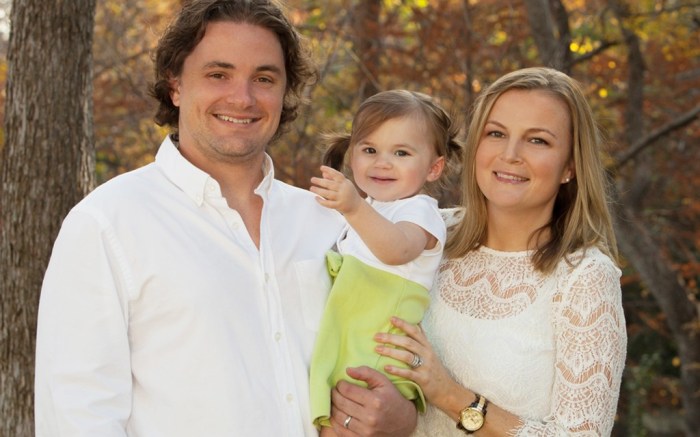 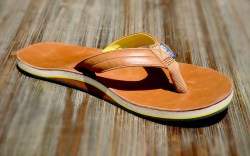 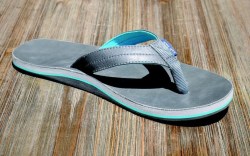 Hari Mari is barely a year old but already making a splash in the shoe industry.

Created by husband-and-wife team Jeremy and Lila Stewart, the flip-flop brand takes advantage of an opportunity the founders saw in the market. “We knew the percentage of people buying flip-flops in the U.S. was on the rise,” Lila Stewart told Footwear News. “In some parts of the U.S., [the styles] make up 26 percent to 27 percent of all footwear sold in certain states.”

The brand also has a mission to give back. Based on a personal commitment to help kids — a cause the Stewarts became passionate about while living in Jakarta — the couple pledged that with each pair sold they would donate $3 to help children battling cancer.

Beyond its philanthropic endeavors, Hari Mari also aims to offer comfortable footwear styles. Its memory foam toe has contributed to the label’s early success, and Hari Mari’s first leather collection, called Lakes, debuts in December and is gaining significant traction. “We have a crazy amount of pre-orders for the leather line already,” Stewart said.

The current offering, which retails for $60, is a hybrid of fashionable flip-flops with comfortable constructions, according to Stewart. And the leather line will be no different. Retailing for about $80, Lakes will be an elevated version of the current styles, but with the same level of comfort and visual appeal.

Here, Stewart sounds off on her competition and the direction of her fast-growing business.

1. Do the funds you raise for charity go to one specific children’s hospital?
LS: We have two partner hospitals: Cook Children’s in Fort Worth, Texas, and Dell Children’s Medical Center in Austin, Texas. Our business model for our philanthropy will basically be that we’ll follow our accounts and, in markets where we have a large presence, we plan on partnering with hospitals there so we can donate locally. Buy local, give local is a good way to think of it. We’re still young and new, so we only have two partner hospitals right now, but we have our eye on a few cities such as Chicago, Atlanta and Tulsa, Okla.

2. How does Hari Mari differentiate itself from other philanthropic footwear brands, such as Toms Shoes?
LS: A lot of companies are doing great things overseas, but our mission is to make a difference in the U.S. There are a lot of selling points about Hari Mari and I don’t know if you could say that about a lot of other footwear brands. We’re philanthropic, our shoes are made responsibly and they’re also comfortable and colorful.

3. As Hari Mari grows, can we expect any new product categories?
LS: The focus right now is the leather collection, but we also have prototypes for a children’s line, which we’ll hopefully launch in 2015. Also, either next year or the year after, we’re looking to create a lower-priced foam line of flip-flops in fun colors.