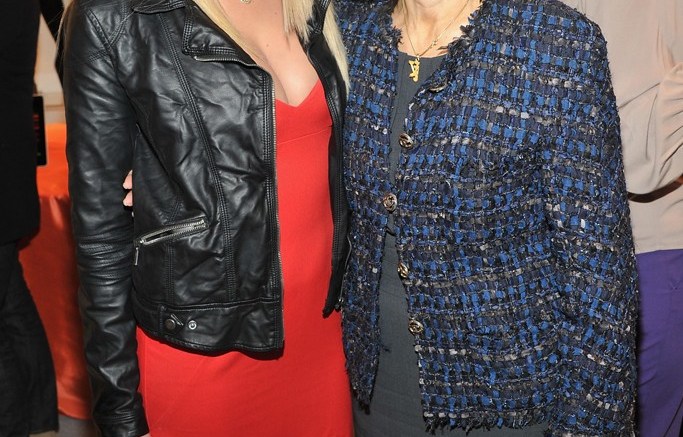 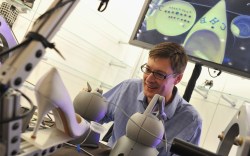 The Stuart Weitzman showroom in New York looked more like a science lab than a fashion display on Wednesday.

The designer and his wife, Jane Weitzman, who are longtime supporters of the Children’s Hospital Boston, hosted an event under the tagline “Shoe & Tell: Where Fashion Meets Science” to raise awareness about the hospital’s research work. (Although Stuart Weitzman, who lived in Massachusetts after college, was already in Spain working on the brand’s 2013 line.)

The evening welcomed doctors and residents from the hospital, alongside NHL player Sean Avery and models Jessica Heart and Genevieve Morton.

“We’ve always supported the hospital — the research is amazing. You’ll see why Stuart and I are so excited about [their work], it’s so innovative,” Jane Weitzman said of the various presentations throughout the room.

In one corner, a robot, designed with enough skill to operate on a beating heart, was decorating a Stuart Weitzman pump with Swarovski crystals.

“We’re always trying to be creative in our work and try new [methods], but we never anticipated doing this,” the hospital’s Pierre Dupont said of the robot’s work, which was being guided by another hospital employee.

Elsewhere, there were demonstrations showcasing testingstrips in development to detect cancer and fish bowls housing Zebrafish, which have vibrant colors that test for tumors.

Dr. Marsha Moses, an ovarian cancer researcher who directs Children’s Folkman Institute, was also on hand during the night.

Weitzman’s Young Hollywood Cares Collection donates all sale proceeds to Moses’ research. Celebrities such as Scarlett Johansson and Michelle Trachtenberg recently partnered to design shoes for the collection, and a new lineup of star names will be announced later this year.