One to Watch: Joanne Stoker 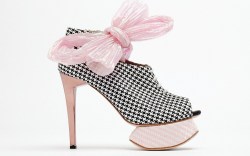 Everything is coming together for Joanne Stoker.

With a new studio space in London’s trendy Shoreditch neighborhood, a buzz-worthy collaboration with Matthew Williamson and a growing celebrity following, the designer has hit a high note in her fifth season.

“I always wanted to have my own business so I could have the freedom to create whatever I wanted,” said Stoker, who graduated from Cordwainers College in 2009 with a master’s degree in footwear design.

She jumped at the chance to launch her eponymous label for spring ’11, after winning an award that provided her with a mentorship with bespoke shoe legend Jimmy Choo and a pop-up shop near his store for six months. Since then, she has received the British Footwear Association’s Footwear Friends Designer Award and many other accolades, as well as an expanding list of wholesale accounts.

Intricate heel treatments and origami-like uppers distinguish her collection, which is made in Italy and retails for $300 to $800 at such stores as Luisa Via Roma in Florence, Italy; Secret Location in Vancouver, British Columbia; Per Lei Couture in Qatar; and Notjustalabel.com.

“She had a real signature look, even at such a tender age,” said Debra Hepburn, director of Youngbritishdesigners.com, an e-tailer that focuses on the next generation of talent from the U.K. “Throughout all her seasonal moods runs the strong and steady current of Joanne’s signature design aesthetic: risk-taking, mold-breaking and simply stunning.”

The couture-like constructions and details inherent in Stoker’s work also have caught the eye of many celebrity fans, including Nicki Minaj, who wore two of Stoker’s styles in her “Starships” music video.

“Joanne’s shoes are outrageous, amazing and artistic,” said Louise Roe, a television presenter, model and fashion journalist. “They make a huge statement, and I’m obsessed [with them].”

For spring, Stoker sought inspiration from seaside promenades, such as the ones at Coney Island in New York and Blackpool, England, and on the television show “Boardwalk Empire.” “The candy-cane heels and stripes were all inspired by my first holiday along the British coastline when I was 5 years old,” said the Newcastle, England, native.

And comfort is always central to her designs: “I have never done the mega heels because I am a woman and I have to wear the shoes,” she said.

Expansion has been a major focus lately. For fall ’13, Stoker is broadening her signature collection to include more flats, mid-heels and ankle boots, and she also has taken on a sales agent and grown her staff to six. Plans are in the works to convert her Shoreditch studio into a concept shop next year.

On top of that, Stoker was tapped by Matthew Williamson to collaborate on his high-profile debut shoe collection for spring ’13, which appeared on the runway in September.

“I wanted the shoe collection to have a real point of difference and truly reflect the DNA of the brand,” said Williamson. “It was such a pleasure working with Joanne. She is [very talented] and appreciated what we wanted to achieve from the outset.”

Stoker noted that their mutual interest in textile applications made their partnership especially compatible. (She studied textile design before footwear, working for a period under Tracy Reese in New York before returning to London.) “Matthew is fantastic with textile applications and always finds a way to use interesting materials, bold colors and unique prints and inspiration,” said Stoker.

Also this season, she collaborated with London designer Eudon Chai for runway shoes and consulted for the London retailer Dune. And Stoker was recently named into the British Footwear Association’s Accelerated Business Development Program, which will provide her with funding and a yet-to-be-named mentor within the industry.

“I would quite like it to be Tamara Mellon,” Stoker suggested. “I’ve been mentored by Jimmy Choo, so it would be good to see both sides. Why not?”

Age: 29
Hometown: Newcastle, England
Mentor: Jimmy Choo. “I enjoyed learning from him, but it also made me realize I didn’t want to do bespoke. I prefer to sell to boutiques and still be unique, but not one-of-a-kind.”
Dream customer: “I imagine she would have unusual pieces and clothes from different periods — not outrageous, but a quite adventurous style. She wants to buy something unique, a one-off piece rather than basics.”
Fashion icons: “I admire women with a strong sense of style who are always wearing something fresh and unique, like Carrie Bradshaw, Katy Perry and Lady Gaga.”
On trends: “Shoes used to be just sexy, and I’m so pleased they have gotten more girly and fun.”