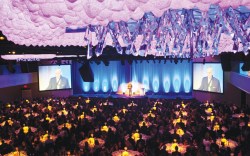 Neal Newman is off and running.

Seven weeks into the top job at Two Ten Footwear Foundation, Newman has hit the road to meet with dozens of industry heavyweights, from Zappos.com to Steve Madden, drawn up ambitious money-raising plans and revamped the internal organization chart.

“I can’t manufacture the intimacy that Peggy [Kim Meill, past president] had with the board and the industry — and I don’t intend to,” Newman told Footwear News after his first Two Ten board meeting in February. “I’m bringing 30 years of experience running nonprofits, raising money and interacting with stakeholders — and do it exceedingly well — and I look forward to bringing that brand of openness, focus and discipline into the organization.”

Newman has worked with nonprofits and philanthropic groups both in the U.S. and Europe since 1980. For the last decade, the 54-year-old has lived in Dublin, Ireland, with his wife and two children, running his own consulting practice called Philanthropia International.

The president of the Waltham, Mass.-based nonprofit is banking on his prior experience of reaching out to a wider cross section of people and boosting fundraising targets. His end goal: to make Two Ten more nimble and inclusive.

“We want to streamline and simplify how we fundraise,” said Newman, who believes in using multiple avenues and multiple methods to do so. “We’ll be rolling out those plans to the industry over the coming months.”

“Neal is going to get the foundation into a position to do more and do it more effectively,” said Jim Salzano, president of Clarks Cos. N.A. and chairman of the Two Ten board. “He will engage the industry in a more substantial way.”

Carol Baiocchi, Kohl’s SVP and DMM of footwear and past Two Ten chairman, added, “Neal will bring a new energy that will take us into the next decade of our foundation. Peggy’s work and what she delivered in the last 10 years set the stage for Neal to take us in a bold direction, with fresh ideas and a new methodology.”

Newman is set to present his completed agenda to the board in June, but here, he offers exclusive insight into the future direction of Two Ten.

Days after you started, Two Ten secured one of its largest personal donations: $1 million from Steve Madden. You’re off to a good start.
NN: I can’t take any credit for it, though I wish I could. It was already in the pipeline. Carol Baiocchi was working on that one and that’s been going on for a long, long time.

Given your well-known predecessor, some might say you have big shoes to fill. Do you plan to build on her work?
NN: We will talk about how we’re going to build Two Ten over the coming months, but we certainly have a direction. As I said to the board [at our first meeting], I can’t manufacture the intimacy that Peggy had with the board and the industry, and I don’t intend to. I’m bringing 30 years of experience running nonprofits, raising money and interacting with stakeholders — and do it exceedingly well — and I look forward to bringing that brand of openness, focus and discipline into the organization.

Do you have a fundraising target for 2012?
NN: Not at this minute. We have to dig into that and take a look at it. I’m more interested in taking a look at how we can create efficiencies in the corporate giving side, increase the individual giving side and look at some untapped opportunities on the employee-giving and cause-related sides.

What goals do you have for the year?
NN: Raise more money, help more people and increase our impact. That’s essentially the simple animation of the strategic plan that the organization has. The phone is ringing off the hook for relief and help, and that’ll fluctuate from year to year, obviously, but the trends suggest that won’t abate. We need to be fully prepared to respond, as we do, in 48 hours, but also to have the financial resources available to help people in need. I take that as seriously as job No. 1.

Do you worry about the economy discouraging donations?
NN: There’s always this mythology that recessions dampen philanthropy, and they do a little bit. Climate change, the change of seasons, world events — there are so many variables. And while it may take us a little bit longer to achieve our goals, I am 110 percent confident that philanthropy will continue to grow and blossom in the industry.

Many new programs — the young professionals and women’s initiatives — have launched in recent years. What is the status of those?
NN: They’re very important. What we need to do is match up the importance of those initiatives with the in-house labor that we have available. I am thoroughly focused on maintaining a lean, efficient organization. I don’t want us to simply be raising money to pay ourselves salaries. If we can keep the level of our operating expenses flat, or look for efficiencies, then we will be able to dedicate appropriate staff resources to make all these activities successful.

How will you foster those programs?
NN: We need expertise — staff expertise — matched up with the initiative. The issue is that a lot of [the work around these programs] has fallen on one person’s shoulders, and that’s not a way to really run the business. So it might mean we have to change some portfolios around, maybe look at bringing in some loaned executives. I talked to a couple of board members about loaning us some of their high-potential, young executives. They could work virtually with us. They could work in St. Louis or Las Vegas for us for a month or two and be able to move initiatives forward.

Will you be staffing up Two Ten?
NN: We will be tinkering. We will be moving portfolios around, looking at one or two additional positions. The first, which is out in the marketplace as of last month, is a new development director to head up the development team. And Jeanne Connolly is taking over as director of communication.

What’s the biggest challenge for Two Ten?
NN: The key challenge is one word: engagement. The foundation needs to engage the people who work in our industry and it needs to be two-way. It’s not about asking for money; it’s about having an impact. And there is such tremendous goodwill and philanthropy in this business, especially when compared with any other industrial sector. You can’t manufacture that. You can’t buy that. This is thoroughly unique in the country, and I want to animate and publicize that message, that the footwear industry has a tremendous philanthropic heart and soul, and has for 70 years.