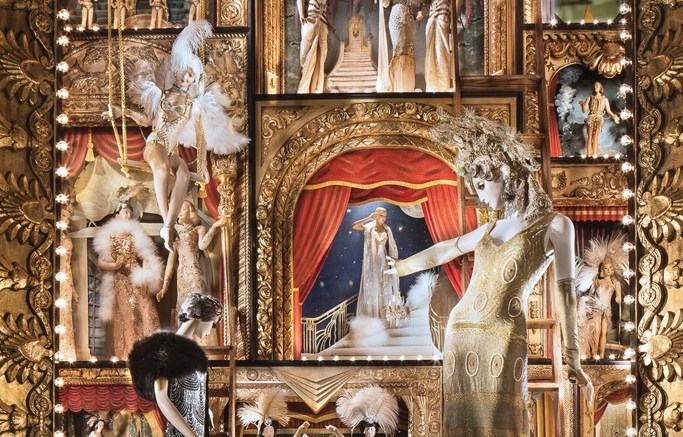 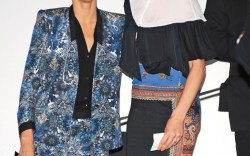 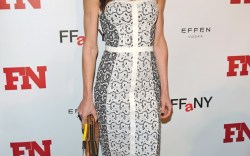 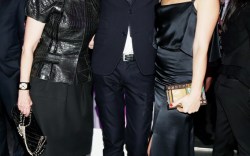 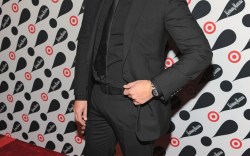 Window Watching
Linda Fargo, window shopper? Not quite. Spy spotted Bergdorf Goodman’s SVP of fashion office and store presentation at the flagship one morning last week, admiring the handiwork of the store’s window director, David Hoey. He was this year inspired by entertainment such as the Ziegfeld Follies, Vaudeville revues and Busby Berkeley’s Hollywood musicals of the 1930s. “I always stop on my way in. I did the windows for many years, but as I moved into the fashion office, I’ve passed the baton on a little begrudgingly. I do miss it, because it’s the ultimate creative thing you can do in retail since it’s all fantasy,” Fargo said wistfully, pointing out the sparkly earrings she lent the mannequin from her personal collection, as well as the antique hat atop its crown, purchased for the store. So what’s Fargo’s holiday wish? “Snow. I want holiday to really kick in. I’m not feeling it yet.”

The In Crowd
Tabitha Simmons has quite the inner circle. The inaugural winner of Footwear News‘ Style Influencer of the Year award, arrived to the Achievement Awards on the arm of husband and photographer Craig McDean and was surrounded by fellow fashion fixtures, from Vogue’s Meredith Melling Burke to supermodel Miranda Kerr. Simmons said she had spent the day shooting with another of the evening’s guests, Hilary Rhoda. “Hilary is lovely. It was good fun aside from the 6 a.m. call time,” she said. Simmons planned to round out the week with another high-profile photo shoot in Los Angeles.

For her part, Rhoda is looking forward to spending the holidays catching up on the classics: “‘Home Alone,’ ‘Miracle on 34th Street’and ‘It’s a Wonderful Life,'” she listed after walking the red carpet alongside pals Leandra Medine and Marketer of the Year winner Rebecca Minkoff. “I never get sick of ‘Home Alone,'” Rhoda added. “Every year, it’s like watching it for the first time.” Speaking of firsts, the model also talked about her inaugural appearance in the Victoria’s Secret Fashion Show earlier in November (the show airs on CBS tomorrow). “I loved that Rihanna and Bruno Mars were performing. It was interactive and fun, and so different from any other show I have done.”

Ken’s Obsessions
What’s on Ken Downing’s must-have list? “I’m obsessed with these Zara cargo pants,” gushed the SVP and fashion director of Neiman Marcus, who paired them with a well-cut Prada suit jacket at the FNAAs last week. “I’m also obsessed with artist Jack Pierson. My mother always tells me, though, that there is a fine line between collecting and hoarding. Have you watched ‘Hoarders?’ It’s enough to make me get off the couch and clean my entire house.” One must then wonder where the jetsetter calls his base. He quipped: “American Airlines.”

On Target
Designers hit the bull’s-eye last week with a little help from Target. Brian Atwood was ready to do some major shopping at the Target + Neiman Marcus launch party, perusing looks from fellow collaborators such as Prabal Gurung, Diane von Furstenberg, Jason Wu and Tory Burch. “I have to see it all,” he said at the Wednesday event. “I have the credit card ready.” As for Atwood’s own store, which opened on Madison Avenue in October, the designer said he can’t stay away. “It’s like my baby. I try not to go there every day so I don’t freak out the salespeople, but I was there today. I always go unannounced.” Next up, he’s heading for Milan to put the finishing touches on fall ’13 for his eponymous shoe line, and then he’s off to St. Barts for a beachside holiday. Also on-hand at the party was Prabal Gurung, who is working on a larger women’s collection for Target, set to hit stores in early February. “What I’m really excited about is that there is a whole array of shoes,” Gurung told Spy. “There are heels, flats, pumps, strappy shoes — and it is beautiful. The goal was to make these shoes at a certain price point look really expensive, and they do. When you see them, you’ll just die.” But his mind wasn’t solely on work. Gurung also is looking forward to spending the holidays at home in New York. “This is the first time [my family] has come, so I will be doing a lot of the touristy things. I need to take them to see ‘Wicked.'”

Old School
Christian Siriano has been doing some shopping. During his latest travels to North Carolina, the designer made some additions to his growing collection of antiques. “I just bought a vintage bar cart at the High Point Markets Antique & Furniture Trade Show,” the designer said. “I’m very excited about it.” On the fashion front, the “Project Runway” alum has big plans to branch out beyond ready-to-wear and shoes. After bowing his first shop in New York this fall, Siriano’s next launch will be fragrance.

Art Attack
A host of big-name designers will heat up Art Basel Miami Beach this week. Charlotte Olympia Dellal is unveiling hand-painted versions of her popular Dolly style, which will be available exclusively at Neiman Marcus’ Bal Harbour, Fla., location starting Tuesday, while Christian Louboutin is getting in on the exhibition action by showcasing the latest work of Chinese artist Ye Hongxing in a specially designed gallery space in its Miami boutique. “The multiple pop vision of Ye Hongxing fits perfectly with the brightness of Miami,” Louboutin said. And United Nude is showing off a collab with graffiti artist Niels “Shoe” Meulman.