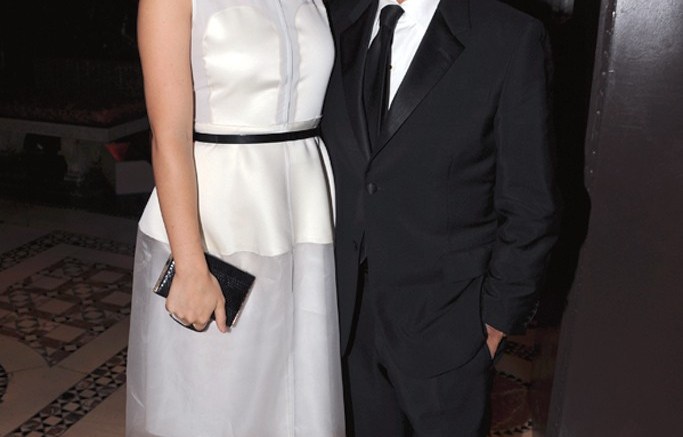 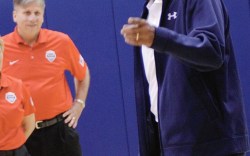 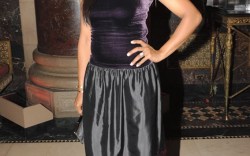 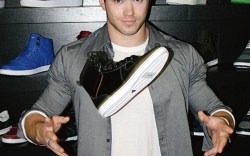 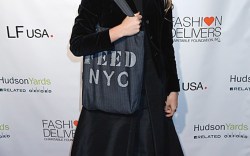 In Vince-able
Vince Camuto is seeing double. The designer is gearing up to launch his Two by Vince Camuto denim-based collection for spring, and there will be footwear in the mix, too, though he noted the shoes will have a more casual look than the core brand. “Two is on fire. The line encompasses so much,” said Camuto. “The shoes look hot.” The collection already has a celebrity fan in Olivia Wilde, who got her hands on a denim look from the line before the official launch. Wilde also accompanied Camuto to the ACE Awards in New York last week, where the footwear legend was honored with the Visionary Award. “I’ve been following Olivia for years,” Camuto said of the actress. The executive also remains close to celebrity fave and business partner Jessica Simpson, although Camuto hasn’t yet had a chance to meet her daughter, Maxwell. “Jessica sends me pictures. [The family] looks great.”

House of Hoops
Under Armour has a wear tester in the house — The White House, that is. With President Barack Obama scoring re-election last week, the Baltimore-based brand is looking to keep the commander in chief supplied with basketball kicks for his routine pickup games. (Obama balled with Scottie Pippen on Election Day last week, keeping with the tradition he started in 2008.) “I won’t go into details, but we do some stuff for [the president],” said Dave Dombrow, Under Armour senior creative director of footwear. “It’s great that he’s a fan the brand.” Last year, Obama was spotted leaving the gym in a custom-made pair of Under Armour sneakers emblazoned with the presidential seal.

Sole Endeavor
June Ambrose is combining her penchant for design with her reality TV prowess. The celebrity stylist and star of VH1’s “Styled By June” is collaborating with HSN for an eponymous footwear launch. The spring ’13 debut consists of 12 styles, carries price points of $59 to $110 and is slated to go on sale in March. Ambrose told Spy, “I thought [footwear] was a great category to launch with Mindy Grossman at HSN. They gave me a choice [of accessories], and I selected footwear. The [theme for spring] is ‘In The Wild,’ and I was taken by texture and architectural heels.” Ambrose noted that the vibrantly hued styles include heels, wedges and a staple flat, with details such as jewels, python prints and acrylic accents. “The price point is [aimed at] the fashionista who collects shoes and wants people to talk about them. They’re conversation pieces, but I also wanted them to be accessible.” Meanwhile, Ambrose’s 8-year-old daughter, Summer, is already delving into her own fashion projects. “She just started her own Instagram page, @sumsumhope, and she has 6,000 followers,” Ambrose said. “She posts things about runway shows and her own take on style. It’s a fun thing that we can do together.” However, the vigilant mom set up some serious ground rules for her social media butterfly. “I’m her editor-in-chief. I approve everything she posts,” said Ambrose. “She is only allowed to follow two people — her brother and me.”

Celeb Showdown
Celebrities clearly love the shoe business. Just last week, Kellan Lutz (of “Twilight” fame) announced his collaboration with Creative Recreation, set to debut this week, and dancer and actress Julianne Hough revealed a deal with online retailer Sole Society for a line to be unveiled in February. “Any celebrity endorsement is awesome — it makes the consumer [excited]. People are obsessed with celebrities,” said Jessica Paster, a stylist to the stars who also has designed a capsule collection for Justfab.com. Paster noted that Hough seems to be the perfect fit for the lower-priced Sole Society site. “Julianne is such a cute girl and an up-and-comer and she’s middle America. It wouldn’t make sense if Julianne Moore or Uma Thurman did it,” she said. So will the uptick in celeb names entering the footwear industry cause a traffic jam? And do women ever have enough shoes? Paster quipped: “It’s never too much. It’s never oversaturated.”

Travel Buddies
Clarins CEO Christian Courtin-Clarins and designer and FEED co-founder Lauren Bush Lauren are jet-setters with a cause. They first hit the road together in May, visiting Honduras to see FEED’s humanitarian mission in action, and the two are planning another journey next year, according to Clarins. “[The trip] was hard,” the CEO said of visiting schools and seeing children in need, “but it was also very positive. Next year, we will go to South Africa because there is a lot of need there.” The two first met in 2011, when FEED and Clarins collaborated on skincare products to benefit the charity. They have since formed a strong friendship, and Clarins braved last week’s nor’easter to present a “Fashion Has a Heart” award to Lauren at Fashion Delivers’ annual gala. “I have a lot of admiration for Lauren,” Clarins told Spy. “The weather will never stop me from giving something to someone I have so much respect for.” As for Lauren, the designer said she felt humbled by the praise. “The real heroes are the people out in the cold tonight, helping those who have been displaced [by Hurricane Sandy],” she said.

Spotted:
Nicholas Kirkwood on the Victoria’s Secret runway at the star-studded event last week. The designer crafted all of the show-stopping footwear this year. “Everyone fantasizes about being a part of the Victoria’s Secret show in some way and it was an exciting opportunity to be able to contribute to this fantasy,” said Kirkwood.