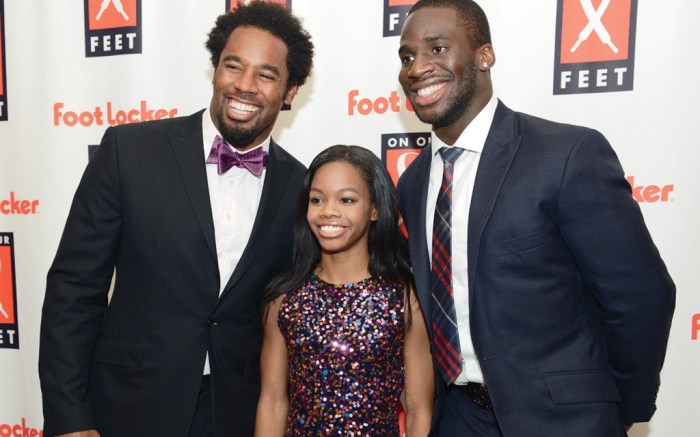 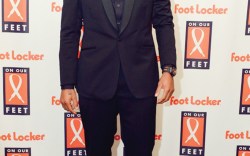 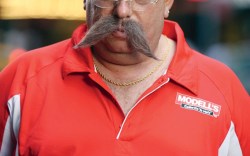 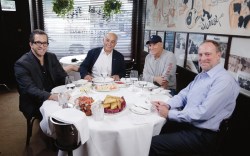 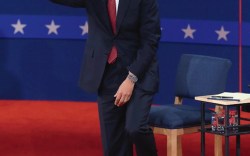 Locker Room
How does gold-medal gymnast Gabby Douglas feel about the “Fab Five” U.S. team gymnast costumes trending for Halloween? “Its such an honor that people want to dress as me. Maybe I’ll just go as myself, then,” she joked while at Foot Locker’s 11th annual “On Our Feet” fundraiser gala at New York’s Gotham Hall last week. The star chose Nike sneakers to pair with her sparkly mini-dress, citing the brand as one of her favorites. But when Douglas wants a dressier footwear look, BCBG is her go-to brand. Also at the gala was “Jersey Shore” star Vinny Guadagnino, who may be going from reality TV to regular TV. “I would love to get on more of a scripted type of show,” Guadagnino said. But one thing you won’t see the aspiring actor and author working on: a shoe line. Guadagnino said he doesn’t plan to follow in fellow Shore-ite Nicole “Snooki” Polizzi’s footsteps. “Everything I do, I want it to be very special to me, very important. I’m very selective,” he said. But that’s not to say he doesn’t love his kicks. Guadagnino, wearing his favorite pair of Jordan VI Motorsports to the black-tie event, is a self-professed big fan of the Jumpman brand. “Jordan usually sends me stuff, and out of all the things that get sent to me for free, whenever Jordan sends me stuff, I’m [excited].” And Jordans seemed to be a popular pick for the night. Athlete Carmelo Anthony wore his Jordan retro 7s to the event, and told Spy about his latest shipment from the brand. “I get boatloads of shoes,” Anthony said, adding that his latest batch included pairs of his favorite sneaker — the Jordan retro 9.

In Disguise
Mitch Modell is ready for his close-up. The CEO of Modell’s Sporting Goods will be featured on the Nov. 2 season premiere of CBS’ “Undercover Boss,” where company heads disguise themselves to work on the front lines of their organizations. Under the cover of being at the London Olympics (and thus unreachable except by email), Modell spent a week this summer working at a few Modell’s stores and one of the retailer’s distribution centers. Keeping his secret required a few aesthetic sacrifices. “I shaved my head completely bald, and they gave me a really thick mustache with glasses and earrings,” the CEO said. “My wife wouldn’t look at me for a month.” But even if it meant some friction on the home front, Modell said the project was a valuable one. “It was an incredible learning experience,” he said. “The week after I filmed, I had all my direct reports working in the distribution center on all the jobs I was doing to let them know what we could do to make the processes simpler or just to make sure that some of the [issues] we never knew about [are improved],” he said. In fact, he recommends all company heads think about following the same path. “Even if they don’t go on the show, there is nothing like getting on the front line with associates and working with them,” he said. “You find out how many things are filtered that you never know about until you’re really on the ground floor.”

Need for Speed
Rick Cytrynbaum might be busy plotting a potential acquisition deal for Modern Vintage, but that doesn’t mean he can’t find time for some fun. When he’s not working, the CEO often is found racing go-karts, dirt bikes or snowmobiles on two tracks that he and brother and business partner Brian Cytrynbaum built on property near Montreal. The brothers, who also are neighbors, have six children, ages 4 to 10, between them. So for Cytrynbaum, the racing hobby means quality family time. “It has been great watching [my kids and nephews] grow up and become safe drivers and learn to do things that my brother and I both love,” the exec said, adding that the track also provides fast fun. “I don’t like doing anything for more than an hour.” And Cytrynbaum also is working on another time-saving measure: building a private heliport near his house. Complete with a landing pad and gas station, the addition is set to be finished this month. “I can leave Montreal and literally land on the corner of my property [when I return],” Cytrynbaum said.

Pairs for Potus
With the presidential election just weeks away, iconic American shoe brand Johnston & Murphy is preparing to cast its fashion vote. The company will present the new chief with a pair of shoes from its Custom Select series of customizable looks — crafted in the U.S., of course. “We’re just updating the last,” said Jason Dasal, VP of marketing. “We will provide a few drawings based on their taste and style perspective and make it especially for them. It will be executed for whomever takes office. It’s a wonderful tradition to honor the office and position. However, we do not want to turn it into politics.” In 2008, Johnston & Murphy presented President Barack Obama with two pairs of shoes. They included an update of an ankle boot originally made for President Abraham Lincoln. “They were both senators from Illinois, and Obama was sworn in on a Lincoln bible,” Dasal explained about the connection between the two men. Obama also selected black calfskin oxfords that were presented in a custom box made of koa wood from his home state of Hawaii.