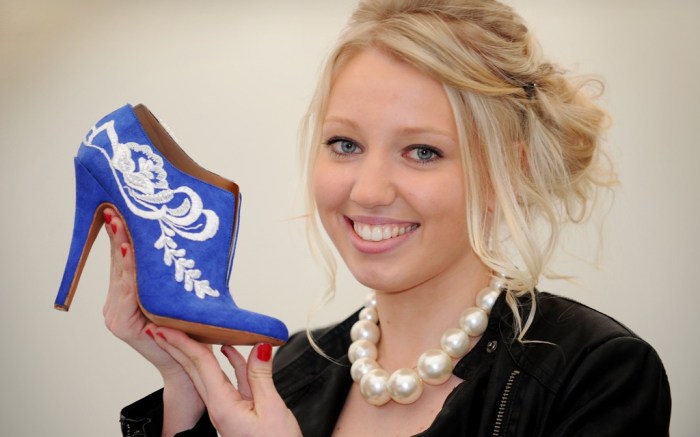 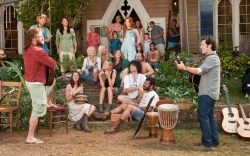 Royal Affair
The Duchess of Cambridge will soon don a pair of blue suede shoes created by a college student. Becka Hunt was the lucky winner in a design contest organized by De Montfort University in Leicester, England. After being named as one of the six finalists (out of 100 applicants), her design was handpicked by Kate Middleton herself. Hunt crafted a sapphire-blue ankle boot with beading and lace in a cream floral pattern. “I am absolutely overwhelmed, excited and amazed,” Hunt said in a statement. “The attention I have had since I was announced as the winner is all a little scary to be honest, but I have to say it has been great fun and hopefully this will be good for a future career.” So when will the style come to life? Hunt’s design will now be crafted into a pair of shoes for the Duchess to wear later this year.

Hippie Days
Shoes are important — even in a hippie community. In “Wanderlust,” Jennifer Aniston and Paul Rudd go from fashionable New Yorkers to members of a quirky commune, and their footwear style transforms too. The film’s costume designer, Debra McGuire, even took Aniston’s wardrobe from expensive heels to handmade sandals. Here, McGuire sounds off on mastering the looks from head to toe.

What footwear brands were prominently used in the film?
DM: There is a big evolution [of brands]. Linda [played by Jennifer Aniston] starts off in Lanvin. When she gets to the commune, she’s in Frye boots, which is believable for something she would have. And then her sandals are Calleen Cordero, so even though they look like hippie sandals, they’re expensive sandals. And the boots she wears are from Barneys Co-Op. When she transitions back and they’re back in New York, she has on Dior. George [played by Paul Rudd] is in Ugg, Vans, Converse and John Varvatos. Malin Akerman’s character [Eva] wears Minnetonka moccasins throughout the entire movie. Justin Theroux [as Seth] wears Minnetonka boots, Ugg boots and Simple sandals.

Was there a memorable footwear moment in the film?
DM: The shoes are a really important part of who these characters are, who they were, who they evolved into. [One moment] is with Joe Truglio [as Wayne] — he’s the nudist winemaker — so he’s barefoot and he’s making the wine. But there’s a shot of his porch and we had tons of shoes lined up. He owned a ton of shoes, but he wore none. They become his art piece. It’s pretty funny.

Where do you start in the design process?
DM: I start with color palette, motivation and [the character’s location]. The color palette in New York is basically black. It evolves into warmer, softer colors. And it transitions once [Linda and George] go back [to New York from the hippie commune]. It’s a whole psychological, visual story.